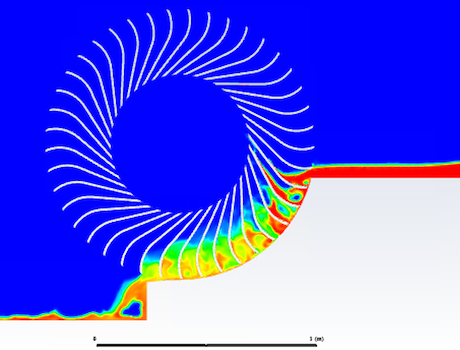 New micro hydro technology is bringing electricity to rural communities around the world. The first waterwheel to be patented in 138 years, development of the innovative Carruthers Waterwheel ignores previous design assumptions and applies modern understanding of hydraulics and the basic laws of energy. Report by Dr Alexander Sancho and Dr Ekaterina McKenna

According to a recent United Nations hydropower report, there are millions of sites worldwide with a river or waterfall of less than five metres drop, especially across Sub-Saharan Africa and South East Asia. In the past, such sites have been identified as a possibility for hydropower before a decision was made to move on due to the high costs. In most of the small communities surrounding these sites, less than 10% of the population have access to electricity, so there is a huge, untapped resource available with the possibility to change the lives of people in the surrounding towns and villages.

While the benefits of large-scale hydropower sites can be seen in countries around the globe, unfortunately their expansion is hindered by several factors, especially in these rural communities. The disruption of eco-systems, for instance, is of great concern, along with problems regarding sediment trapping, negative impact on fish, large payback periods and methane generation due to extensive flooding in upstream areas.

At the University of Strathclyde’s Advanced Forming Research Centre (AFRC), we recently teamed up with Carruthers Renewables Ltd to explore manufacturing methods for a patented water wheel capable of combating electricity scarcity in developing countries.

The new breastshot waterwheel design, proposed and owned by Carruthers Renewables, effectively utilises both potential and kinetic energy of the water through alterations in blade curvature and inclination. The design allows high efficiencies, whilst maintaining this high performance over a greater range of velocities and flow rates than traditional wheels. Prototype of the wheel

Invented by former maths lecturer turned civil engineer, Penelope Carruthers, the new waterwheel, can be placed directly in the river, so it does not extract water from the river, nor does it interfere with the course of the river, making it more environmentally friendly than a traditional mill or turbine installation, which can have a negative impact on a river’s ecosystem.

This is known as an ‘Inflow System’. Traditional waterwheels extract water from the river, run it down a mill race and then pass it through the wheel. This makes them ‘run-of- river’ or an ‘outflow system’ with a depleted section of the river between the offtake and the tailrace, similar to most large conventional hydropower. The game changer is to use the Inflow System to utilise 80% of the flow with minimal environmental impact.

According to Carruthers et al. in Reinventing the wheel: the waterwheel, inflow systems allow a larger percentage of the river flow to be used compared with an outflow system, thereby generating more electricity. Only the Carruthers Wheel has the features to allow for high efficiency over an extreme range of flows, while maintaining a system which is, for example, mindful of the fish passing through the river.

The one-year £250,000 project, funded by the Department for International Development (DFID) and the Engineering and Physical Sciences Research Council (EPSRC) through the Innovate UK Energy Catalyst, saw the company utilise our expertise in advanced manufacturing methods and gain letters of support from the likes of the Crown Estate, Scottish Water and the Scottish Environmental Protection Agency.

The Carruthers Wheel has a unique smooth water action within the wheel, which explains its high efficiency at an unprecedented range of flows. The first waterwheel to be patented in 138 years, Carruthers Wheel is truly innovative, producing electricity from waterfalls and rivers with less than five metres drop. This was previously deemed unviable and unprofitable because of the high cost of turbines for small bodies of water. The Carruthers Wheel ignores previous design assumptions and applies modern understanding of hydraulics and the basic laws of energy – the first waterwheel designed for maximum efficiency over a huge range of flows.

The aim of our study was to develop, validate and investigate a 2D Computational Fluid Dynamics (CFD) model for the Carruthers Waterwheel design to acquire a better understanding of the hydraulic behaviour of the wheel and confirm the high efficiency values measured experimentally in a prototype. Working closely with Carruthers Renewables, we developed the CFD model which could be used to investigate its performance. This CFD model is the first of its kind to accurately predict the effects changes in the wheel design have on potential output. Once the CFD model was created, it was validated by two different processes analysing the near-wall flow resolution and comparing the numerical results with experimental values obtained from an existing 1:10 scale prototype of the design. The efficiency obtained from the model was compared to the experimental efficiency in two different flow rate conditions, showing the results are in good agreement with the experimental observations. The fluid dynamics of water inside the wheel was also observed and visually compared to video observations of the experimental setup, resulting in very similar behaviour.

For the reasons discussed above, it was determined that the CFD model developed in this study successfully emulates the wheel’s performance and could be used to explore different performance scenarios of the Carruthers Waterwheel. The CFD model of the wheel, unveiled at the Hydro 2020 Conference celebrated online earlier this year, was the first to predict behaviour and aid future design of a waterwheel of such a specific geometry.

The design basis was confirmed by observing a sharp peak in the torque curve related to kinetic energy utilisation. Maximum efficiencies of about 70% were obtained for the ratio of tangential wheel speed, Vout, to the water inlet velocity, Vin, in the range between 0.5 – 1.15, for most inlet conditions. In this range maximum efficiencies were also approximately constant. The new design is therefore proven to offer consistent efficiencies for variable flowrates.

The Carruthers Waterwheel is currently in detail design phase and experimental testing, and the plan is to build a full size demonstrator in the near future. The feasibility project with Carruthers Renewables has allowed us to support the manufacturing engineering needs of this growing technology, including extreme cost-effectiveness of the concept and ease of maintenance, pushing the boundaries of what is possible.

Moving forward, we are continuing to support Carruthers Renewables, taking the hydro-wheel to the next stage of development.