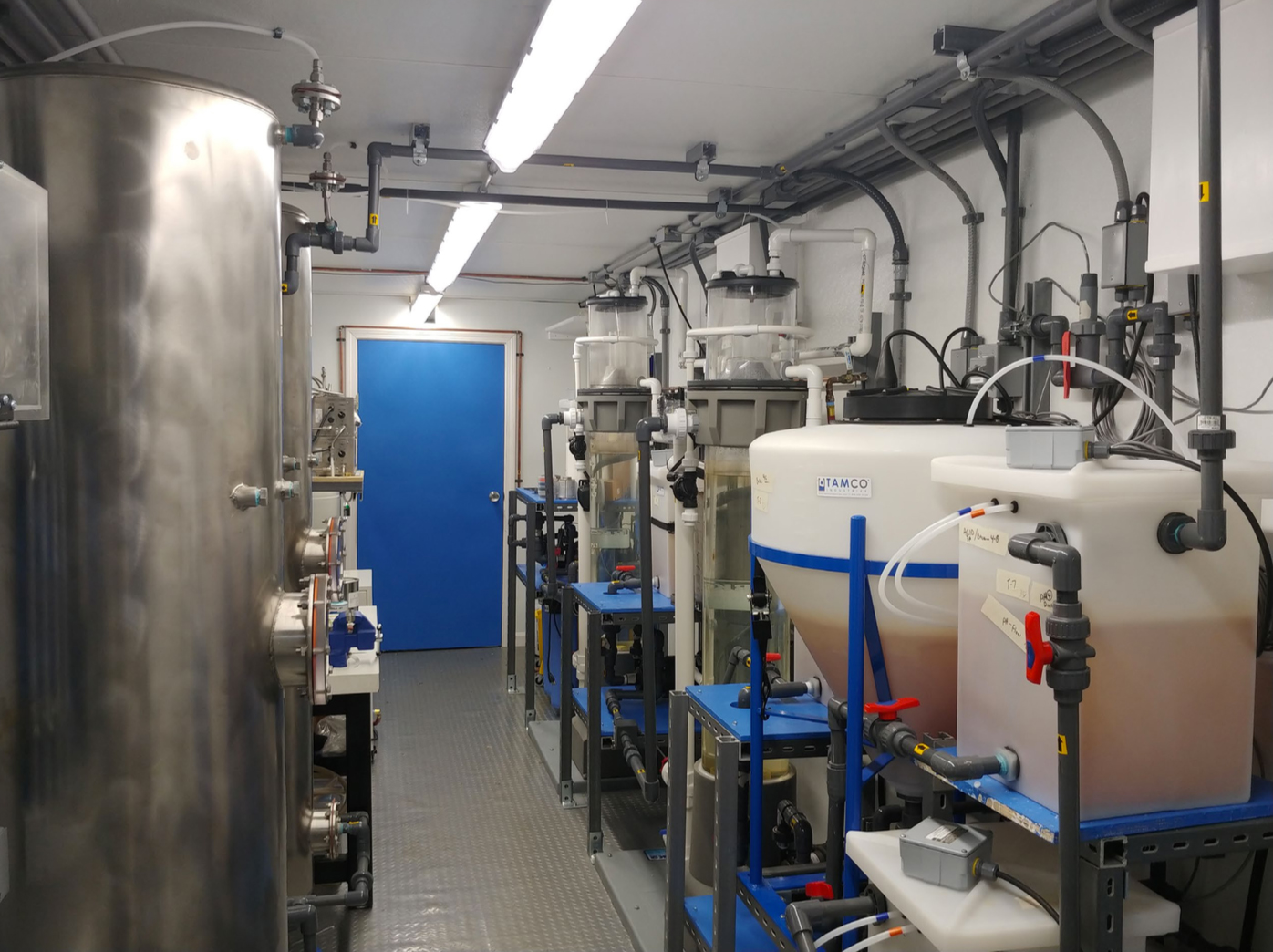 The PFAS compounds extracted from the ground are destroyed using an ultraviolet light technology inside this trailer. (Photo courtesy of EnChem Engineering Inc.)

University of Rhode Island hydrogeologist Thomas Boving and colleagues at EnChem Engineering Inc. are testing a proprietary new technology for quickly removing and destroying hazardous chemical compounds from soil and groundwater. If proven effective, the technology could soon be applied to cleaning up the abundant per- and polyfluoroalkyl substances, collectively referred to as PFAS and “forever chemicals,” that contaminate drinking water supplies serving about one-third of Americans.

PFAS compounds have been in use for more than 60 years and are found in common household goods like non-stick cookware, stain-proof carpets and pizza boxes, as well as in firefighting foams and other industrial products. Because they do not break down easily in the environment, they find their way into human and animal tissues and can lead to many serious diseases.

“Our approach to this problem is in two steps,” said Boving, URI professor of geosciences and civil engineering. “First, we flush the compounds out of the ground by pumping in a sugar molecule that has the ability to remove PFAS from the soil and groundwater. Then we pump the solution out of the ground and hit it with a chemical oxidation process to destroy the compounds.”

The process was developed in collaboration with Raymond Ball, principal of EnChem Engineering in Newton, Massachusetts, a hazardous waste site remediation company that used an earlier version of the technology to remediate mixed organic wastes at an Air Force base.

“When we detected PFAS during that project, it was proposed that we do a follow-on study for the treatment of PFAS, and that’s what we’re doing now,” said Ball.

The refined technology, called XCT OxyZone, is being tested this winter at Joint Base Cape Cod, a military base formerly known as Otis Air Force Base, where firefighting foams used at its former fire training center contaminated groundwater in the region with PFAS. The scientists are drilling injection wells and extraction wells at the site this month and will begin testing the process in January.

“We’ll inject the solution for three or four hours, then extract it for about the same amount of time, then repeat the cycle,” said Boving. “It’s like putting the soil through the washer for repeated cycles, but without first excavating it. And if all works as we expect, within three or four months we’ll have achieved our goal of reducing PFAS contamination to levels that meet Massachusetts pollution guidelines.”

Once the contaminants have been pumped out of the soil and groundwater, they are processed using an ultraviolet light technology that breaks the chemicals into their basic elements. That process is done inside a 40-foot steel container that can be transported to other contaminated sites as needed.

According to Ball, the only alternative currently available for cleaning up sites contaminated with PFAS is to dig up the soil and wash it in special machines, but it is very expensive and impractical, especially where the chemicals have penetrated deep below the surface.

“When you leave the PFAS in the ground, it travels with the groundwater, contaminating the groundwater downstream forever,” Ball said. “The faster you can clean up the source area, the better. And our process is fast.”

In addition to remediating sites contaminated with PFAS, Ball said the technology can also be applied to cleaning up a wide variety of other contaminants, including chlorinated and petroleum-based compounds.

“We likely have the only technology for remediating PFAS that is working at this scale at this time,” said Boving. “There are a lot of other great ideas out there, but most are still being tested in the lab. We’re ahead of the game, and we have high hopes.”

The testing is funded in part by the National Institute of Environmental Health Sciences.