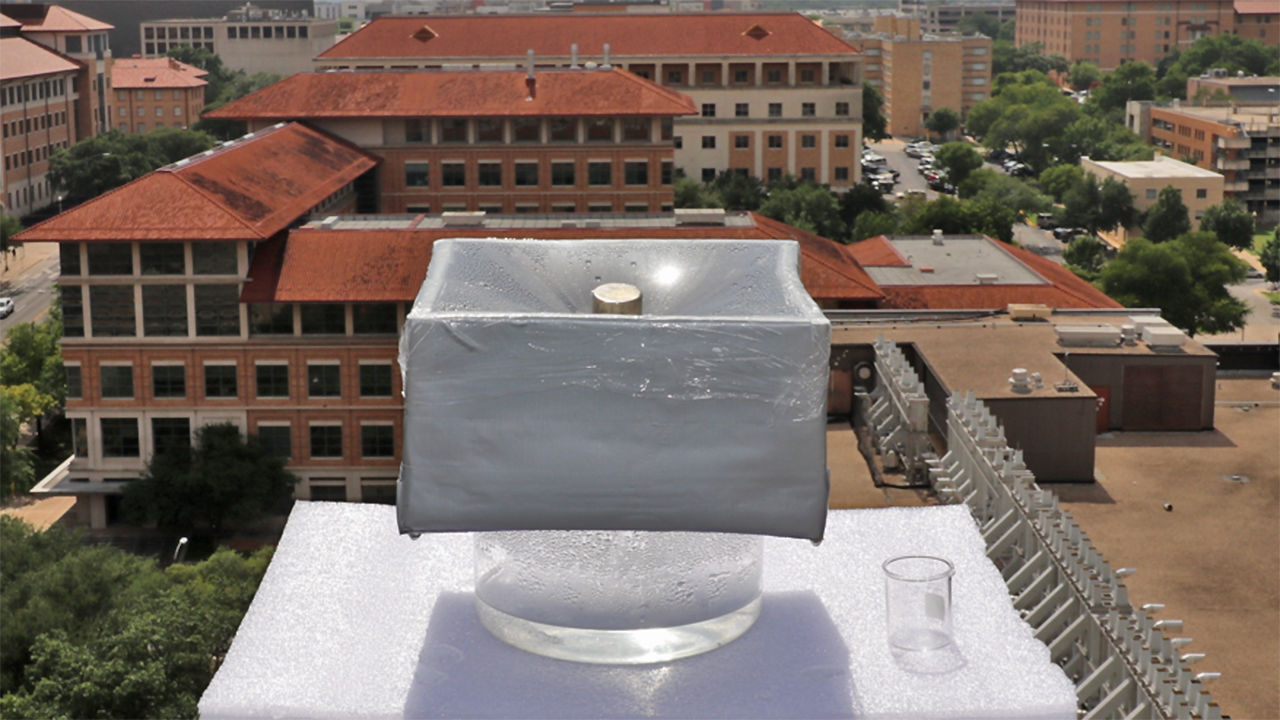 Tanklike devices called solar stills use the sun to evaporate dirty or salty water and condense the vapor into safe drinking water. But large, expensive stills can only produce enough water for a small family.

Now, researchers have developed a new material that speeds the process of evaporation, enabling a small solar still to provide all the drinking water one family needs. If the technology proves cheap enough, it could provide millions of impoverished people access to clean drinking water.

A gel at the heart of this solar still produces a record amount of fresh water. XINGYI ZHOU AND YOUHONG GUO/UT AUSTIN


Today 783 million, or nearly one in 10, people around the world lack such access, according to UNICEF. These people spend a collective 200 million hours a day fetching water from distant sources. And even though technologies exist for purifying contaminated water and desalinating seawater, these typically require expensive infrastructure and lots of energy, putting them beyond the reach of many communities.

Recently, researchers have been working to upgrade solar stills as a cheap, low-tech alternative. The traditional still is little more than a black-bottomed vessel filled with water and topped with clear glass or plastic. The black bottom absorbs sunlight, heating water so that it evaporates and leaves the contaminants behind. The water vapor then condenses on the clear covering and trickles into a collector.

But the output is low because the sun’s rays must heat the entire volume of water before evaporation begins. Commercially available versions produce about 0.3 liters of water per hour per square meter (L/h/m2) of the covered water’s surface area. The average person requires about 3 liters of water a day for drinking. Providing enough drinking water for a small family requires a still around 5 square meters in size. Operating at their theoretical best, such devices can only produce 1.6 L/h/m2.

Guihua Yu, a materials scientist at the University of Texas in Austin, and colleagues recently reported a way around this limit. It involves hydrogels, polymer mixtures that form a 3D porous, water—absorbent network. Yu and colleagues fashioned a gellike sponge of two polymers—one a water-binding polymer called polyvinyl alcohol (PVA), the other a light absorber called polypyrrole (PPy)—which they then placed atop the water’s surface in a solar still.

Inside the gel, a layer of water molecules bonded tightly to the PVA, each forming multiple chemical links known as hydrogen bonds. But with so much of their bonding ability tied up with the PVA, the bound water molecules bind only loosely to other nearby water molecules, creating what Yu calls “intermediate water.” Because intermediate water molecules share fewer bonds with their neighbors, they evaporate more readily than regular water. And when they do, they’re immediately replaced by other water molecules in the still. Using this technology, Yu’s solar still produced 3.2 L/h/m2 of water, double the theoretical limit, his team reported last year in Nature Nanotechnology.

Now, Yu and his colleagues have created an even better hydrogel. They mixed in a third polymer, called chitosan, which also strongly attracts water. Adding chitosan to the mix created a gel that could hold more water—and increased the amount of intermediate water as a result. A still using the new hydrogel distilled water at a rate of 3.6 L/h/m2, the highest rate ever reported and about 12 times the amount produced by today’s commercially available versions, the researchers report today in Science Advances.

“This is a fantastic starting point,” says Peng Wang, an environmental engineer at King Abdullah University of Science and Technology in Thuwal, Saudi Arabia. Wang notes that at this higher water production rate, a solar still 1 square meter in size could produce about 30 liters of clean drinking water per day, enough for a small family. Even better, he says, all three polymers in the hydrogel are both commercially available and cheap. That means that if the stills using them are rugged enough, they could help provide clean water for those who need it most.