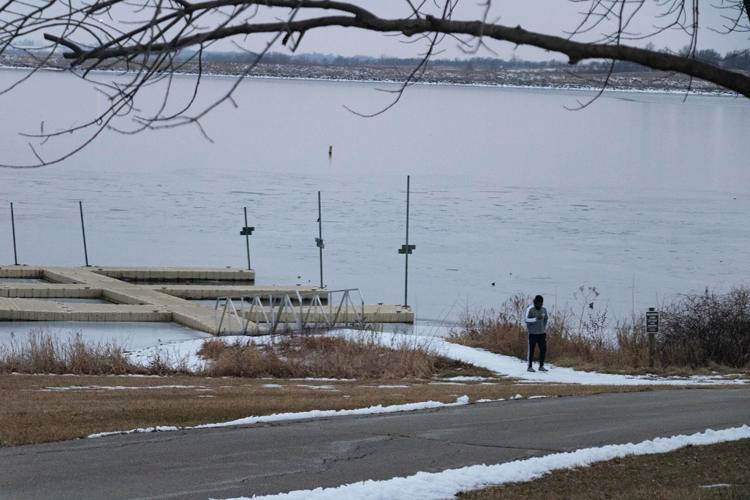 Water during winter
A Northwest student walks away from the shoreline after taking a picture Jan. 9 at Mozingo Lake. Mozingo is known for its large acres of park land as well as being the main water source for the city of Maryville. ADDALYNN BRADBURY | Photo Editor | @TheMissourian

Over the past three years, citizen concerns of the Maryville water supply have risen. In 2017, algae blooms in Mozingo Lake were found to cause a foul taste and odor in the water supply.

During the summer, the algae blooms affect the taste, but even when the cold weather hits and the algae blooms die down, the water remains affected. After the algae begins to die off, it leaves something behind called geosmin.

For years now, geosmin has played a huge role in the unpleasant taste and smell of the Maryville water supply. Approximately $860,000 has been spent on water improvements since February 2017, including sampling, treatments, studies, chemicals and shoreline stabilization.

“What geosmin essentially is, is after the algae dies, it leaves a byproduct, and that by product is the geosmin,” Assistant City Manager Ryan Heiland said. “So, it's really just kind of the remnants of the blue-green algal bloom that happened, and then it just naturally dissipates into the water as well.”

When the winter months arrive and the lake freezes over, the decomposition of algae leaves behind more geosmin than it typically would during the summer.

“I would say in the past it kind of does tend to seem we are having more winter algae blooms than during the summer, or any time other,” said Heiland. “But again, those patterns are still kind of shifting out in terms of how the lake is doing.”

Some factors that may contribute to the algae growth include nutrient levels, the age of the lake, nitrogen and phosphorus runoff and soil erosion and stabilization.

Heiland noted that the city has done extensive work to ensure the water quality continues to improve. The most effective water treatment discovered so far has been the powder activated carbon. This process eliminates anywhere from 80-90% of geosmin from treated water.

“Unfortunately, the technology that we have at the water treatment plant, we can’t get the remaining 10-20% out, and so that’s where we’re still having the taste and odor issues,” Heiland said. “But the powder activated carbon has done a really good job to reduce most of it.”

A long-term fix to the water taste and odor issues would be to spend $15-30 million on a new drinking water treatment plant. The original plant was constructed in 1959 and is beyond its useful life. Since then, there have been only two upgrades in the treatment plant, the last one being in 2000.

The assistant city manager noted that, although there may be an unpleasant taste and odor to the town’s water supply, the safety of drinking water is nothing to be concerned about. The water is sampled and sent into the Department of Natural Resources each week, where it is reviewed and analyzed to ensure the city’s water meets all the health and safety requirements.

During the City Council meeting Jan. 11, Maryville City Manager Greg McDanel also expressed concerns on the topic. In the Council’s last meeting, the city announced it had approved an application for an algaecide from Hawkins Inc. to help deplete the algal blooms, ultimately leading to better tasting water. However, the two treatments of algaecide were received a week behind the scheduled delivery.

“After much effort by staff, we received that chemical on Dec. 30,” McDanel said. “Unfortunately, that was late enough where the ice cap has occurred at Mozingo.”

The city is working with HDR Engineering, Inc. and the Missouri DNR to get underneath the ice cap to efficiently apply the algae treatment.

“A new water treatment plant is the only effective way to 99% address the geosmin and algae issue that we have,” McDanel said.

The City Council plans to present a Water Treatment Alternative Analysis that includes a list of short-term and long-term recommendations for taste and odor issues as well as the water treatment process. The analysis will be delivered to the DNR and the public for further progress on this situation during their next meeting on Jan. 25.