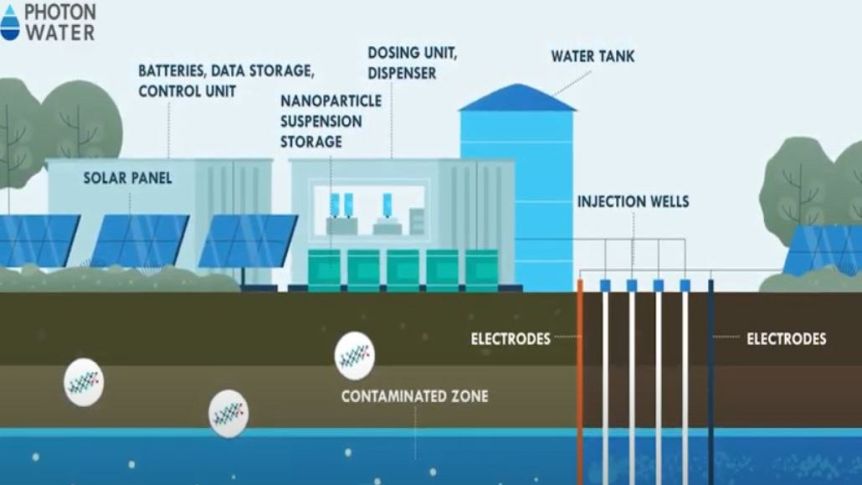 New technology to remove PFAS from the environment will be trialled in Jervis Bay next year and, if successful, could be rolled out at other contaminated sites across Australia.

Locals have been told not to eat seafood caught from some waterways at Jervis Bay.(ABC Illawarra: Jessica Clifford)

The Department of Defence has been investigating a range of potential mitigation techniques to help manage PFAS that was found in firefighting foams used on defence bases around the country, which has now leaked off the bases into surrounding areas.

The department has entered into a contract with Photon Energy to trial nano-remediation technology, which would break down PFAS in the environment.

How would this technology work?

PFAS is highly stable in the environment, making it difficult to remove or break down, however that is what this technology is capable of, according to the department.

"This is an in-situ technology, which means it treats PFAS without removing water or soil from the environment," a spokesperson said.

"The design phase of the trial is currently underway and defence expects site works and installation of the equipment to commence at the end of 2020."

The nano-technology set-up to remove PFAS from the environment at Jervis Bay.(Supplied: Photon Water)

The director of Photon Water, Petr Kvapil, said the concept was globally unique.

"We have been successfully applying our in-situ nano-remediation technology to sites affected by various and complex pollutants worldwide," Mr Kvapil said.

"Our technology's potential multiplied when extensive laboratory tests indicated we can break down per and polyfluorinated substances," he said.

An investigation into PFAS contamination at Jervis Bay caused by foams used on the HMAS Creswell Navy base and the nearby bombing range has been underway since 2016.

A final investigation report and a management plan were due out in March this year, but have not yet been released.

Defence said this was due to COVID-19.

Residents of the Wreck Bay Aboriginal community have been advised by the EPA not to eat seafood from Mary's Creek near their town, which was once a major food source.

Many have also been worried about drinking the water, although defence said the amount of PFAS in the water supply was within safe guidelines for drinking.

In its latest update, the department said the nano-remediation system would be trialled to reduce PFAS in Mary's Creek from next year.

A spokesperson also said the final investigation reports and management plan would be published before the end of the year.

The spokesperson said further community consultation would be scheduled with the Wreck Bay community and there would be ongoing monitoring of the situation for several years.