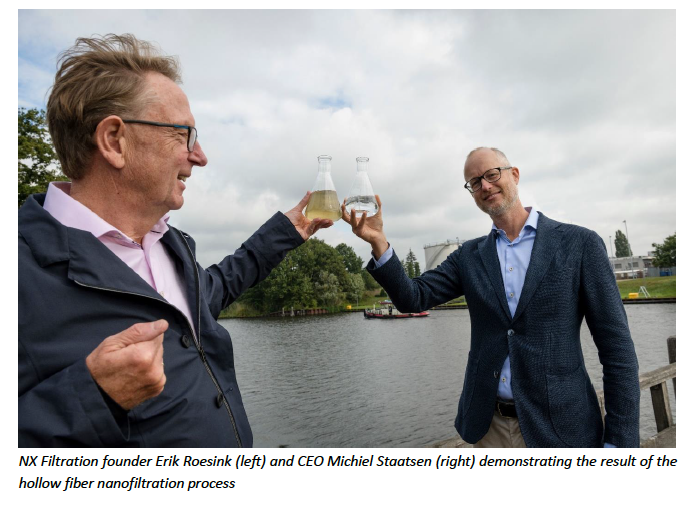 The Netherlands has experienced consecutive years of drought. In 2018, record shortages of rainfall were measured and in 2020, the spring and summer were amongst the 5% driest years since 1906. As a result, groundwater levels are under pressure, especially in the eastern part of the country that lies above sea level these droughts have been most prevalent. In this part of the country, the production of drinking water is primarily reliant on groundwater.

NX Filtration has now introduced a solution for this problem with its innovative and simple to use hollow fiber nanofiltration membranes.

Approximately 60% of the total drinking water production in the Netherlands is reliant on groundwater, with the remainder being based on surface water coming from rivers. Especially in the higher eastern part of the country, where these rivers do not flow, groundwater is the key source for drinking water. Because of the extended periods of drought over the last years, water consumption has increased and groundwater levels have not been replenished with sufficient rainfall. Amongst others, this is resulting in damage to the precious natural environment and causing various issues for the agriculture sector.

Drinking water companies have been exploring various options to deal with this problem. One of the measures has been to convince households and industries to moderate their water consumption during periods of drought. They are also investigating the construction of a long pipeline to transport water from the river IJssel further east to replenish ground water levels. But a more straightforward, cost efficient and sustainable solution could be at hand, as is currently being demonstrated by Dutch membrane innovator NX Filtration.

NX Filtration installed a demo-unit at the Twentekanaal, a local canal that has long been considered too contaminated for the production of drinking water. Through NX Filtration’s unique nanofiltration membranes, pharmaceuticals, pesticides, microplastics, PFAS and other contaminations can be removed from this water. The simple and robust one-step process now produces drinking water quality at a demonstration scale, but can easily be deployed at full-scale level as is already being applied in various municipal plants across Asia.

Erik Roesink, professor in membrane technology at the University of Twente and founder of NX Filtration, explains: “Through applying polyelectrolyte layers on our membranes, we control membrane properties on a nanometer level. This results in e very effective way of removing

contaminations, while containing minerals that are desirable in drinking water. Contrary to other filtration technologies, our nanofiltration membranes are capable of treating polluted feed waters, in a simple one-step process, with lower energy usage and no chemicals as pre-treatment.”

Michiel Staatsen, CEO of NX Filtration, adds: “With this demonstration unit we prove the viability of using water from the Twentekanaal for the production of drinking or process water. This solution could save tremendous investments in piping infrastructure for the eastern part of the Netherlands. Applying this on a larger scale, as we already do in several other countries, could prevent a further decline of groundwater levels and restore balance. Our nanofiltration membranes are also capable of using wastewater streams for the production of drinking or process water. As industrial companies have willingly been adopting this concept, driven by cost savings as well as sustainability goals, we also anticipate a wider adoption of our nanofiltration membranes on the municipal level, especially due to their retention capabilities on micropollutants.”

NX Filtration is an innovative producer of membrane products for treating water and filtering beverages. NX Filtration produces advanced hollow fiber membrane modules for nanofiltration, ultrafiltration and microfiltration applications. Its worldwide unique direct nanofiltration concept was designed to remove organics from water in one single step: without pre-treatment and without the use of chemicals. Together with a production method based on green chemistry and significant energy savings during operation, this provides a unique and sustainable solution. For further information on NX Filtration please visit www.nxfiltration.com