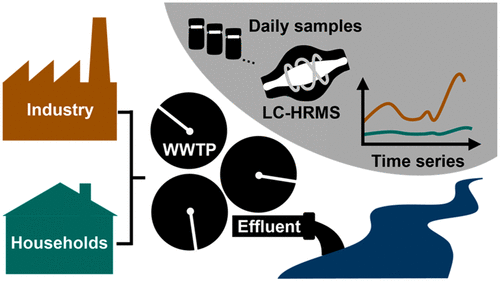 When people take medications, these drugs and their metabolites can be excreted and make their way to wastewater treatment plants. From there, the compounds can end up in waterways. Wastewater from pharmaceutical companies could start off with even larger amounts of these substances. In ACS'  Environmental Science & Technology , researchers report that a single pharmaceutical manufacturing facility could be influencing the water quality of one of Europe's most important rivers.

Wastewater from homes and pharmaceutical manufacturing sites typically goes to treatment plants. Some of the compounds in the water might be biologically active, toxic or persistent, but treatment plants cannot always remove all of the substances before the treated water is discharged into streams or rivers. Little is known about the extent of water contamination from the pharmaceutical industry, in part because companies usually do not disclose details about their manufacturing activities or the identities of the compounds they use. Heinz Singer and colleagues from the Swiss Federal Institute of Aquatic Science and Technology (known as Eawag) wanted to compare compounds in discharged wastewater from two treatment plants near the Rhine River in Switzerland: one that receives only domestic wastewater (WWTP_dom) from homes and small businesses, and one that also receives wastewater from a pharmaceutical manufacturing site (WWTP_ind).

For three months, the team collected daily samples of treated wastewater from the plants and analyzed the substances in them using high-resolution mass spectrometry. Because the pharmaceutical industry typically produces single batches of drugs separated by time, the researchers looked for compounds that showed large variations. They found more of these highly variable compounds in water from WWTP_ind than from WWTP_dom. The team identified 25 compounds as pharmaceutical industry-related substances, including antidepressants and opioids, and their peak levels were much higher in the water from WWTP_ind than from the plant that only handled domestic wastewater. The researchers also detected several of these substances more than 60 miles downstream in the Rhine River, and their levels correlated with those at WWTP_ind. These findings indicate that a single company can impact the drinking water resource for millions of people, the researchers say.

This study presents a nontarget approach to detect discharges from pharmaceutical production in municipal wastewater treatment plant (WWTP) effluents and to estimate their relevance on the total emissions. Daily composite samples were collected for 3 months at two WWTPs in Switzerland, measured using liquid chromatography high-resolution mass spectrometry, and time series were generated for all features detected. The extent of intensity variation in the time series was used to differentiate relatively constant domestic inputs from highly fluctuating industrial emissions. We show that an intensity variation threshold of 10 correctly classifies compounds of known origin and reveals clear differences between the two WWTPs. At the WWTP receiving wastewater from a pharmaceutical manufacturing site, (i) 10 times as many potential industrial emissions were detected as compared to the WWTP receiving purely domestic wastewater; (ii) for 11 pharmaceuticals peak concentrations, >10 μg/L and up to 214 μg/L were quantified, which are clearly above typical municipal wastewater concentrations; and (iii) a pharmaceutical not authorized in Switzerland was identified. Signatures of potential industrial emissions were even traceable at the downstream Rhine monitoring station at a >4000-fold dilution. Several of them occurred repeatedly, suggesting that they were linked to regular production, not to accidents. Our results demonstrate that small wastewater volumes from a single industry not only left a clear signature in the effluents of the respective WWTP but also influenced the water quality of one of Europe’s most important river systems. Overall, these findings indicate that pharmaceutical production is a relevant emission source even in highly developed countries with a strong focus on water quality, such as Switzerland.