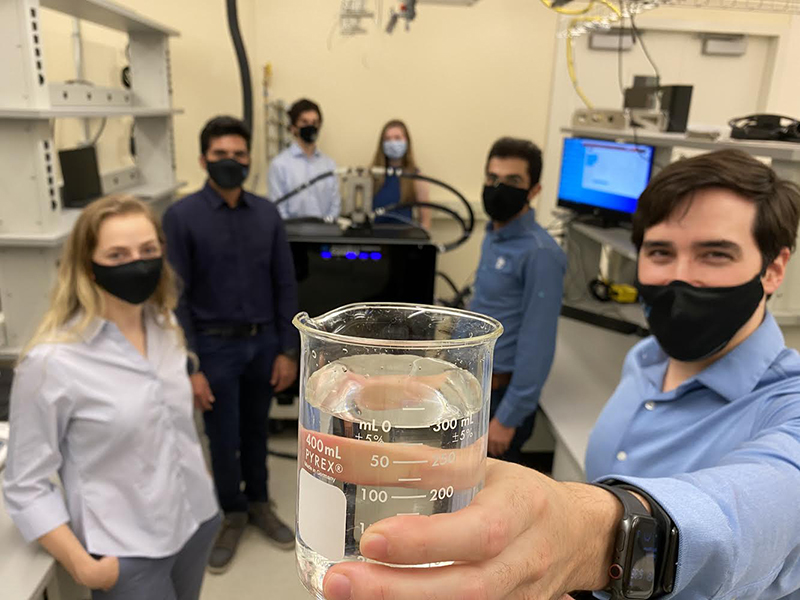 A Purdue University innovator and his team are among the quarterfinalists in a national solar desalination innovation contest. They received the recognition for a technology to use solar power to purify high salinity water, such as treating desalination brine or produced water from oil and gas extraction.

The Purdue team, which created a technology called NoAir, is among 19 quarterfinalists that will advance to the next contest in the U.S. Department of Energy’s $9 million Solar Desalination Prize.

Part of DOE’s American-Made Challenges, the Solar Desalination Prize is designed to accelerate the development of systems that use solar-thermal energy to produce clean water from salt water for municipal, agricultural and industrial use.

“It is an exceptional honor and recognition for our team and technology to have been chosen,” said David Warsinger, an assistant professor of mechanical engineering in Purdue’s College of Engineering. “Our technology aims to use high-temperature solar heat and a hybrid of desalination technologies to purify high salinity water, both in produced water applications in the Permian Basin and other oil and gas operations, as well as coastal applications for municipal water supplies from brackish and seawater.”

“This hybrid process allows us to use much higher temperatures than traditional desalination,” Warsinger said. “This gives us much higher efficiency then similar technologies when using solar heat.”

The brine will be preheated by a membrane desalination (MD) system, which is then fed with brine from the TVC system to further desalt and recover water. This MD-TVC system could attain high energy efficiency at low pressure and be used to treat water produced from oil and gas extraction, with negligible electricity input. It can also help improve the water recovered in seawater desalination.

All of the teams have proposed diverse solutions for creating low-cost solar-thermal desalination systems and a pathway to commercialization. Each winner receives $50,000 in cash and advances to the Teaming contest of the competition.

The competitors were chosen from more than 160 submissions and come from 12 states representing universities, industry and national labs.

In Warsinger’s team, Purdue is the academic partner with two company partners: NiekAab Desal and FocusedSun.

Warsinger is an affiliate for Purdue’s Center for the Environment, and this work is in line with the Center’s interests in energy and water challenges, which is one of the Center’s signature research areas.

Warsinger works with the Purdue Research Foundation Office of Technology Commercialization to patent and commercialize technology. For information on licensing opportunities, contact Dipak Narula at OTC at dnarula@prf.org.

The Purdue Research Foundation Office of Technology Commercialization operates one of the most comprehensive technology transfer programs among leading research universities in the U.S. Services provided by this office support the economic development initiatives of Purdue University and benefit the university's academic activities through commercializing, licensing and protecting Purdue intellectual property. The office recently moved into the Convergence Center for Innovation and Collaboration in Discovery Park District, adjacent to the Purdue campus. In fiscal year 2020, the office reported 148 deals finalized with 225 technologies signed, 408 disclosures received and 180 issued U.S. patents. The office is managed by the Purdue Research Foundation, which received the 2019 Innovation and Economic Prosperity Universities Award for Place from the Association of Public and Land-grant Universities. In 2020, IPWatchdog Institute ranked Purdue third nationally in startup creation and in the top 20 for patents. The Purdue Research Foundation is a private, nonprofit foundation created to advance the mission of Purdue University. Contact otcip@prf.org for more information.

Purdue University is a top public research institution developing practical solutions to today’s toughest challenges. Ranked the No. 5 Most Innovative University in the United States by U.S. News & World Report, Purdue delivers world-changing research and out-of-this-world discovery. Committed to hands-on and online, real-world learning, Purdue offers a transformative education to all. Committed to affordability and accessibility, Purdue has frozen tuition and most fees at 2012-13 levels, enabling more students than ever to graduate debt-free. See how Purdue never stops in the persistent pursuit of the next giant leap at purdue.edu.