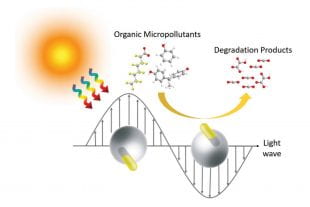 ‘Janus’ nanorods convert light to heat that can destroy pollutants

With a new nanoparticle that converts light to heat, a team of researchers has found a promising technology for clearing water of pollutants.

Trace amounts of contaminants such as pesticides, pharmaceuticals and perfluorooctanoic acid in drinking water sources have posed significant health risks to humans in recent years. These micropollutants have eluded conventional treatment processes, but certain chemical processes that typically involve ozone, hydrogen peroxide or UV light have proven effective. These processes, however, can be expensive and energy-intensive.

A new nanoparticle created by Yale University engineers as part of an effort for the Rice-based Nanosystems Engineering Research Center for Nanotechnology-Enabled Water Treatment (NEWT) could lead to technologies that get around those limitations. The particle is described in a study published this week in the Proceedings of the National Academy of Sciences .

NEWT is a national research center established by Rice, Yale and others in 2015, and Yale’s Jaehong Kim, the lead researcher and creator of the new nanoparticle, collaborated on the project with Rice’s Naomi Halas, NEWT’s nanophotonics research leader.

Researchers in several fields have shown interest in gold nanoparticles for their photothermal and photocatalytic properties, which have proven an effective tool for such uses as cancer therapy. They haven’t, though, figured heavily in water purification efforts, partly because of the difficulty of dispersing nanoparticles in water without stabilizing agents that aren’t good for water treatment applications. The NEWT researchers found a way to fix that by designing and synthesizing “Janus” gold nanorods. These nanoparticles, each hundreds of times smaller than the width of a human hair, are half-coated with silica. This design element is critical, since the silica-coated half allows each nanorod to remain separate from the others and suspended in the water.

“We started with gold nanoparticles and then explored a way to stabilize them through various ways,” said Jaehong Kim, the Henry P. Becton Sr. Professor and Chair of Yale’s Department of Chemical and Environmental Engineering. “So we came up with the Janus design, where we only cover part with the silica. With this partial coating, they get dispersed in water really well, and that’s very useful for this kind of application.”

The nanorods absorb intense levels of light and convert it to heat localized on the surfaces — a process far more efficient than heating the entire volume of water. And because it uses sunlight, the method is low-cost and sustainable. The same part of the nanorod also acts as an electron-transfer catalyst to promote destruction of micropollutants.

“It achieves various functions — in particular by using the solar radiation to produce highly localized heat,” Kim said. “This is the first demonstration of using that particular phenomena for pollutant destruction.”

Halas, Rice’s Stanley C. Moore Professor of Electrical and Computer Engineering and director of Rice’s Laboratory for Nanophotonics, played the key role of elucidating the complex mechanisms of how the photothermal and photocatalytic reactions occur on this unique nanoparticle.