Regarding Groundwater and Drinking Water Access through A Human Rights Lens: Self-Supply as A Norm 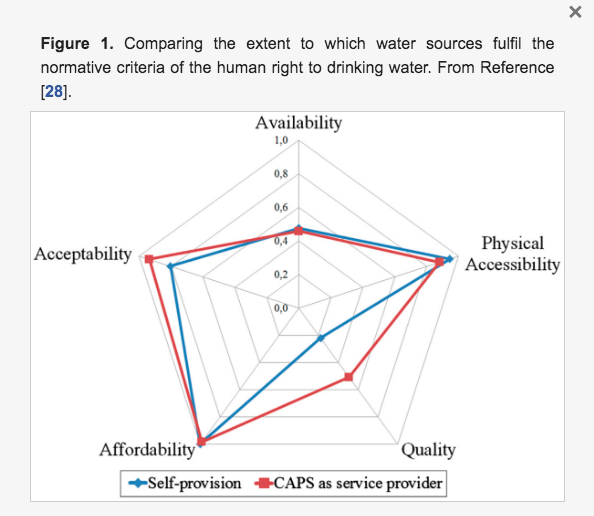 Regarding Groundwater and Drinking Water Access through A Human Rights Lens: Self-Supply as A Norm

* Author to whom correspondence should be addressed.

Globally, some 2.5 billion people depend solely on groundwater to satisfy their daily drinking water needs. The reliance on this resource and its centrality to realize the human right to ‘safe’ drinking water has increased manifold, but this is yet to be fully acknowledged globally or by governments and political leaders at the national level. This paper analyses the interface of international human rights law, as corresponding to the obligations and responsibilities of different actors, regarding groundwater resources planning, management and protection. Drawing on the literature, we discuss the State’s duties to respect, protect and fulfil this right especially in relation to the freedom of end-users to self-supply from groundwater sources; the training and regulation of non-State service providers including drillers and private vendors; and health and safety concerns. Interpreting the State’s duty to ‘fulfil’ through direct water service provision ‘as a last resort’, this paper suggests that self-provision is the original norm for enjoying the right to water. This has significant implications for the State’s role in raising awareness concerning point source protection and aquifer recharge for water resources management and in decisions concerning water allocation. By ignoring self-provision, which is primarily from groundwater, the State is not only missing a tremendous opportunity but is jeopardizing the water security of future generations.

Groundwater is central to human development [1], for a range of societal sectors and for environmental flows [2]. Its strategic importance for global water and food security will probably intensify under climate change as more frequent and intense climate extremes (e.g., droughts and floods) increase variability in precipitation, soil moisture and surface water availability [3]. The reliance on water from aquifers has increased manifold over the past half century, supported by ever cheaper and advanced drilling and pumping technology that enables access in situ and ’just in time’. The values for society—and not least from the perspective of public health—are tremendous, but vastly increased groundwater dependence also has consequences. In some regions, the understanding of the resource is very limited, particularly the quantities available, how much can be abstracted and how groundwater is replenished through recharge. A lack of data means that information on groundwater remains as hidden as the resource itself. Questions also remain about the behaviour and prediction of well-known groundwater pollutants and the interaction between land use categories and groundwater quality, while new concerns around emerging contaminants in drinking water bodies are on the increase [4].

Groundwater has been estimated to provide almost half of all drinking water worldwide with 2.5 billion people depending solely on this resource to satisfy their daily needs for water [5,6]. Thus, it is vital to comprehend and account for groundwater dependence and the quantity and quality utilized. These figures may well be an underestimation though, as official statistics tend to not capture all sources used at domestic level. What we do know is that nearly 85 percent of the Indian population relies on groundwater for drinking [7], and tubewells serve as the main source of drinking water in rural Bangladesh [8]. In growing sub-Saharan countries, including Burkina Faso, Central African Republic, Chad, Ethiopia, Nigeria, South Sudan, Uganda and Somalia, groundwater is the main drinking water source for between 70 and 90 percent of domestic water users [9,10,11,12]. In the USA, 38 percent of the population depends on groundwater for its drinking water supply—be it from either a public source or private well [13] with self-supply wells providing water to approximately 13 percent of the population [14]. In ten studied Southeast Asian and Pacific nations, 79 percent drink groundwater [15]. Besides domestic needs, groundwater is also key for irrigated agriculture and indirectly for food security, as well as for industrial purposes.

Groundwater for household use can be accessed in many ways. It can be drawn or pumped from a single well (i.e., scoop holes, dug wells or shallow or deep boreholes/tubewells) which are one’s own or belong to a community, a neighbour or an NGO. The borehole may even be connected to a ‘water ATM’ (an automated vending machine dispensing drinking water)—or the groundwater is delivered through kiosks, standpipes or informal vendors’ carts and tankers. It can be abstracted from well-fields or springs and provided as part of a public or private utility’s reticulated (piped, networked) water supply system. Nonetheless, individual groundwater-based water facilities and ‘services’ are oftentimes regarded as residuals that need to be eliminated by the continued expansion of piped water systems [11]. In some cases, groundwater is used only for other domestic purposes than drinking, because the water quality is/perceived as/sub-standard and adequate point of use-treatment methods are not employed by end-users [16]. Besides the technical aspects of accessing water, there are important legal and human rights distinctions to be made between groundwater that is provided by a public body; by a private (often referred to, and here used interchangeably with, ‘informal’) vendor or through public–private partnership arrangements; and such that is ‘self-supplied’.

Mainstream policy recommendations are yet to treat groundwater as the critical source for households’ dependence on water that it is. The importance of groundwater as a resource is not very prominent in the discussion on how the world is to ensure access to safe and affordable drinking water for all by 2030 or meet the Sustainable Development Goals (SDG) as a whole. It is furthermore telling that when the World Bank made a systematic mapping of an under-researched aspect of the ongoing global water crisis in its “Quality Unknown” study in 2019 [17], the very big data gaps with respect to groundwater forced the authors to exclude this resource altogether [18]. This absence of attention to groundwater is reflected also in documents, reports and normative statements from the United Nations (UN), with references only rarely found in reports. The planned UN World Water Development Report for 2022 [19] on groundwater is long overdue.

The international community employs human rights to protect the inherent dignity of every human being, and access to safe drinking water was formally recognized as a human right by the UN General Assembly [20] and the Human Rights Council [21] in 2010. This right contains fundamental freedoms and entitlements, conceptualized in accordance with a given frame for interpreting them. The devil is as always in the details and neither the particular content of the right nor the obligations of governments to respect, protect and fulfil have been discussed in relation to groundwater use and management nor are they adequate with respect to self-supply. Underpinning rights as concept is the central definition of them as correlating to duties. This understanding of rights as relational can be credited Wesley Hohfeld [22,23], in whose framework a right can, among other things, require duty-bearers to refrain from performing some action.

This paper sheds light on groundwater for domestic use, with emphasis on self-supply as practice. It analyses the human rights entitlement to be directly supplied with water, on the one hand, and corresponding State obligations and third-party responsibilities on the other. We examine central documents, including case law, and draw from empirical experience of self-supply. We also discuss the regulation of non-State service providers, including private vendors, as well as quantitative aspects of groundwater resource management and health and safety concerns.

Section 2 gives a brief background to the human rights to water in international human rights law. Section 3 explores the literature on the right to water in relation to groundwater, in particular the General Comment No. 15 and reports from the Special Rapporteur (an individual expert given a mandate by the Human Rights Council to investigate, monitor and recommend solutions to a specific human right, in this case the human right to water and sanitation, HRWS). In Section 4 we zoom in on quality aspects of ‘safe’ drinking water, motivated by how the human right to water is today steadfastly accompanied by this prefix. Section 5 discusses in depth the State obligation ‘to provide’ in relation to groundwater. It also offers perspectives on different actors’ involvement in realizing the right to water, particularly when linked to invisible and sometimes unpredictable groundwater resources. In the final section, we conclude that the State’s role as the duty-bearer to provide water is limited under international human rights law and that end-users are supposedly capable agents who can and must take charge of their water supply.