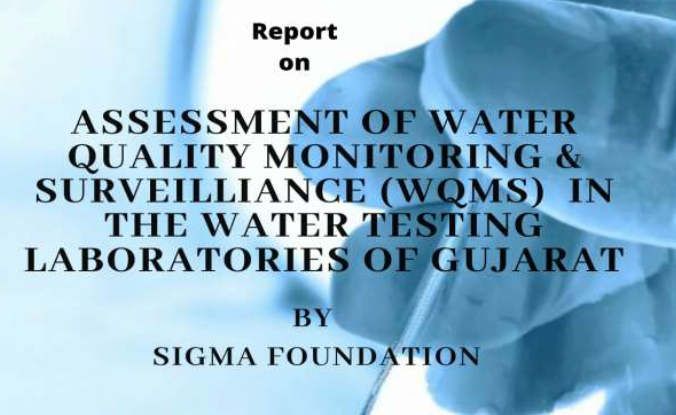 This study is based on Water quality Monitoring and its systamatic follow up at the WQMS Labs in Gujarat. As all we know that monitoring the Water Quality  Monitoring labs are the mandatory activity suggested by Jal Jeveen Mission (JJM) Government of India. This report has been approved by UNICEF Gujarat and Gujarat State Government.

1. The State of Gujarat faces several problems of chemical contaminations of water due

to presence of Fluoride, Nitrate etc. in water, Salinity and bacteriological contamination

due to presence of Coliform and E.coli. The water quality needs to be tested in a

systematic manner. However, safe water can only be guaranteed not merely through

surveillance system, which are distinct but closely related activities.

3. The State Government is in the process of improving the water testing labs but the

Mission’s norms are not known to the state. So, the Water Supply and Management

Organization (WASMO) of the State, desired to have an independent assessment of the

forward to extend support and partnered with SIGMA Foundation, a ‘not for profit’

organization working across the country for taking up the assessment.

4. It was decided, in consultation with WASMO, to select labs of each type, i.e., District

especially tribal and non-tribal. Functioning of the Central Lab at Gandhinagar was also

studied. The District and Taluka labs selected were the following: (i) Mehsana District

Quick View of Major Findings of the Study

measures, so that each laboratory achieves the target of minimum 3,000 water quality

tests per year as per Uniform Drinking Water Quality Monitoring Protocol. The study

formats looked into (i) laboratory operation team, (ii) system of sample collection and

availability of documents and records.

• For Central Lab or State Referral Laboratory: Though Central laboratory is

received in a routine manner other than special drive (pre and post monsoon).

Importantly, requisition of consumable was irregular and little communication was

observed from the HQ on policy and other aspects. Using Field Test Kit for

lab had the facility of using MPN technique. Testing of Fluoride through

Spectrophotometer was observed but the actual technique should be the Ion method.

level laboratory. Testing equipment were almost all in place but lack of calibration as

required was also found. The record keeping and documentation was well organized at

• For Districts Level Laboratory: Few samples were being received other than the special

drive at the district level labs. Importantly, the requisition of consumables was irregular

and no uniform system was observed during the lab visit. Lack of communication

samples for 3-5 days before testing in the lab is against the protocol. Using FTK for

bacteriological quality checking and using Spectrophotometer for Fluoride testing are

also to be changed. The calibration on a regular basis was absent but the record keeping

was well organized at district labs.

• For Taluka Level Laboratory: Water Quality Samples were the major constraint at the

except during pre-monsoon and post-monsoon seasons. Irregularity of consumables and

lack of uniformity were also common at Taluka Labs. Interaction with senior officials

for guidance was less frequent. Also, Taluka labs were not sending the samples to

of Gujarat were below the recommended norm. Water samples were tested moslty

during Pre and Post Monsoon period, which is only six around months. In the remaining

six months little samples were collected and tested. The Human Resources (HR) of the

laboratories (SRL, DLL and Taluka Lab) was found to be satisfactory but not as per

Uniform Drinking Water Quality Monitoring Protocol. Also, they were not being fully