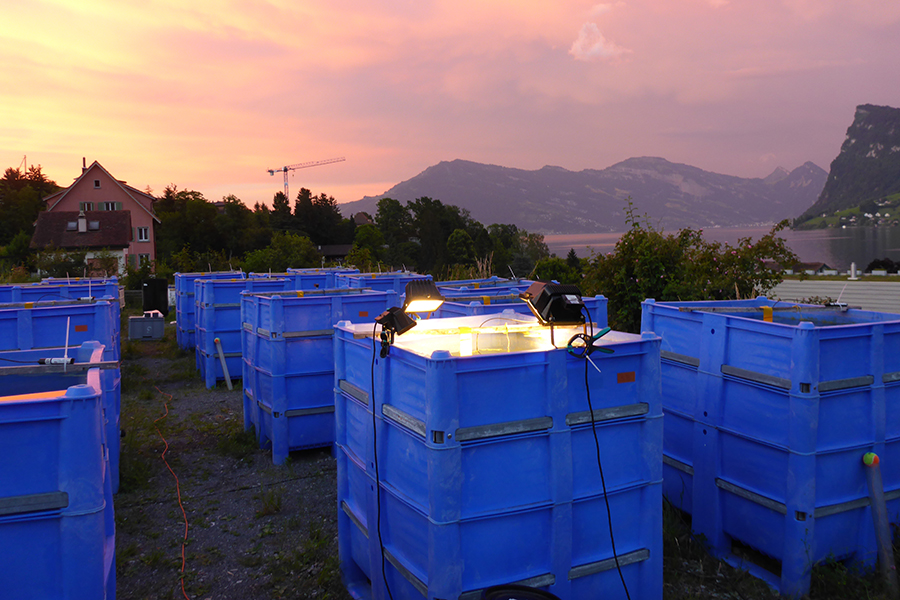 Research by an evolutionary biologist from Florida State University has shown parasites have important and far-reaching effects on predatory fish and the ecosystems they inhabit.

The experiment setup at the Swiss Federal Institute of Aquatic Science and Technology in Kastanienbaum, Switzerland (Image originally published on news.fsu.edu)

These findings, published this week in the journal Ecology, provide important evidence for the little-studied role of parasites in trophic cascades, which are powerful, indirect interactions that can affect entire ecosystems.

“A trophic cascade occurs when predators do something that affects everything below them in the food chain,” said lead author Jaime M. Anaya-Rojas, a postdoctoral researcher at Florida State. “Parasites, on the other hand, are everywhere and can be found at all trophic levels of an ecosystem. With this study, we show parasites are important players in the ecological theater and sometimes determine what predators can do. In so doing, they influence predators’ effects on their ecosystems.”

During the five-year study, researchers from the U.S., Switzerland, England and Portugal focused on a small, predatory species of fish known as the three-spined stickleback, which inhabits coastal waters and freshwater bodies throughout the Northern Hemisphere. The three-spined stickleback is a major research organism for evolutionary biologists seeking to understand genetic changes involved in environmental adaptation and the complexity of host-parasite interactions.

The stickleback acts as a keystone species in many ecosystems and host many kinds of parasites.

In the study, Anayas-Rojas and his colleagues found that if they reduced the parasite load in a top predator — the stickleback — they show improved health, which influences the greater ecological community.

“Likewise, when the stickleback are sicker, they may change their behavior, and that gets translated into a different set of changes in the structure of the community,” Anayas-Rojas said.

Working at the Swiss Federal Institute of Aquatic Science and Technology in Kastanienbaum, Switzerland, the research team conducted a large-scale, controlled experiment using 45 outdoor cattle tanks, each containing 1,000 liters (about 264 gallons) of lake water. Within those artificial ecosystems, scientists were able to manipulate fish population density and control for other factors, such as reducing the sticklebacks’ parasite load with medications.

“Our results show that if we want to fully understand the complexity of communities and ecosystems, we should also include parasites in the picture,” Anaya-Rojas said. “They are not just annoying little beings that drain our energy and make us sick; they are a key part of ecosystems, and their impacts can go far beyond their host, perhaps even making habitats and ecosystems more stable.”

A native of Colombia, Anaya-Rojas has been a postdoctoral researcher at FSU since 2017, working closely with Robert O. Lawton Distinguished Professor of Biological Science Joseph Travis. The two have collaborated on The Guppy Project , a consortium of scientists, postdocs and graduate students who regularly travel to streams in Trinidad to study the ecological and evolutionary consequences of guppy evolution in nature.

“Jaime’s research has shown how what appear to be small factors like parasite loads can get amplified through an ecosystem and affect species that don’t even interact directly with the parasite’s host,” Travis said. “In this case, the long reach of the parasites didn’t just change the numbers of individuals, it changed the composition of the community.”