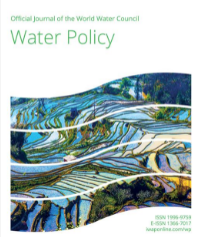 This paper proposes scenarios to achieve more crop per drop and irrigation for all in water-scarce irrigation systems, with a particular reference to India. It uses economic water productivity (EWP) and water cost curve for EWP as tools to reallocate irrigation consumptive water use (CWU) and identify economically viable cropping patterns. Assessed in the water-scarce Sina irrigation system in Maharashtra, India, the method shows that drought-tolerant annual crops such as fruits and/or fodder should be the preferred option in irrigated cropping patterns. Cropping patterns with orchard or fodder as permanent fixtures will provide sustainable income in low rainfall years. Orchards in combination with other crops will increase EWP and value of output in moderate to good rainfall years. Governments should create an enabling environment for conjunctive water use and allocation of CWU to achieve a gradual shift to high-value annual/perennial crops as permanent fixtures in cropping patterns.

Along with climate change, increasing population, changing lifestyles, and increasing sectoral water demand are expected to exacerbate the vulnerability to and risks of natural disasters (Scott  et al ., 2018; Rasul  et al ., 2019; Ray & Shaw, 2019; Shamsudduha & Panda, 2019). In South Asian countries, the agriculture sector uses about 80–90% of the water withdrawals and provides livelihoods for a large rural population. In India, agriculture's reliance on monsoon rainfall makes it highly vulnerable to climate variability and climate change. The projected implications of climate change for water and agriculture call for a much-needed focus on efficient water use in agriculture to build resilience and meet future water challenges (Mirza, 2011).

Efficiency and productivity of water use dominate the discourse on irrigation performance in general and canal irrigation systems in particular (Shah, 2013; Kumar, 2018). In India, low water-use efficiency (WUE) and water productivity (WP), and the widening gap between the irrigation potential created (IPC) and the irrigation potential utilized (IPU) are the major concerns in canal irrigation. Given the increasing incidence and magnitude of natural disasters (IPCC, 2014), more crop per drop or higher water productivity and access to irrigation are timelier solutions now than ever before to enhance resilience in the agriculture sector (Brauman  et al ., 2013; Kumar & van Dam, 2013). In India, the government's initiative for the agriculture sector, named Prime Minister's Krishi Sinchayee Yojana (PMKSY) (https://pmksy.gov.in), has twin goals: more crop per drop and ‘Har Kheth ko Pani’ or irrigation for all farms. How water-scarce canal irrigation systems can realize these two goals is the focus of this paper.

First, what do we mean by more crop per drop? The most commonly cited measure of this proposition is the quantity of production per unit of water use, i.e., physical water productivity (PWP), expressed in kg/m3 (Molden  et al ., 2003, 2010). The other popular measure is the value of production per unit of water use, i.e., economic water productivity (EWP), expressed in $/m3. However, with water scarcities and risks increasing, EWP also needs to consider the net value of output, i.e., profit per unit of water use (Fernández  et al ., 2020). The water use in the denominator of PWP and EWP can be total or irrigation water use. In irrigation systems, the water use measure frequently used is either irrigation supply, or irrigation, or full consumptive water use (CWU).

However, when water is plentiful and the opportunity cost of water use is low, WP has little role to play in water management. When water demand is high, water scarcities emerge, and the opportunity cost of water use is high, WP has a substantial role to play. In such cases, planning for interventions needs to shift focus, first to increasing PWP (the physical production of different crops per unit of water, kg/m3), and then to increasing EWP (the value of production per unit of water, $/m3) at the system level (Sharma  et al ., 2018; GOI, 2019). Ultimately, when the opportunity cost is too high, the economic productivity of water (value of production per value of water) will play a role, and water transfers from low-value to high-value production processes will emerge.

Many irrigation systems in India face increasing climatic risks. The Sina irrigation system in Maharashtra is a typical water-scarce irrigation system in India. It had sufficient water for irrigation through canals in just 3 years in the past decade (Amarasinghe  et al ., 2020). Inadequate monsoon rainfall restricts water releases to the canal command area (CCA) and reduces groundwater irrigation in the water influence zone (WIZ). However, there is potential for more crop per drop and irrigation for all, even in dry years through reallocation of irrigation CWU.

This paper assesses strategies for reallocation of CWU and thereby increasing EWP in the Sina irrigation system. It develops scenarios of water allocation and a water cost curve (WCC) to assess the trade-off. The baseline for scenario development is a year with good rainfall and reservoir storage. The WCC assesses the hydro-economic trade-off of increasing EWP through different cropping patterns. The scenario analysis considers EWP of profit per unit of irrigation CWU as an instrument for water reallocation.

In the next section on methodology and data, we present the approach to developing these scenarios and the WCC for an assessment of the reallocation of CWU and the relevant trade-offs. Next, we present the results of our assessment and discuss the impacts of CWU reallocation. In the final section, we discuss policy recommendations.