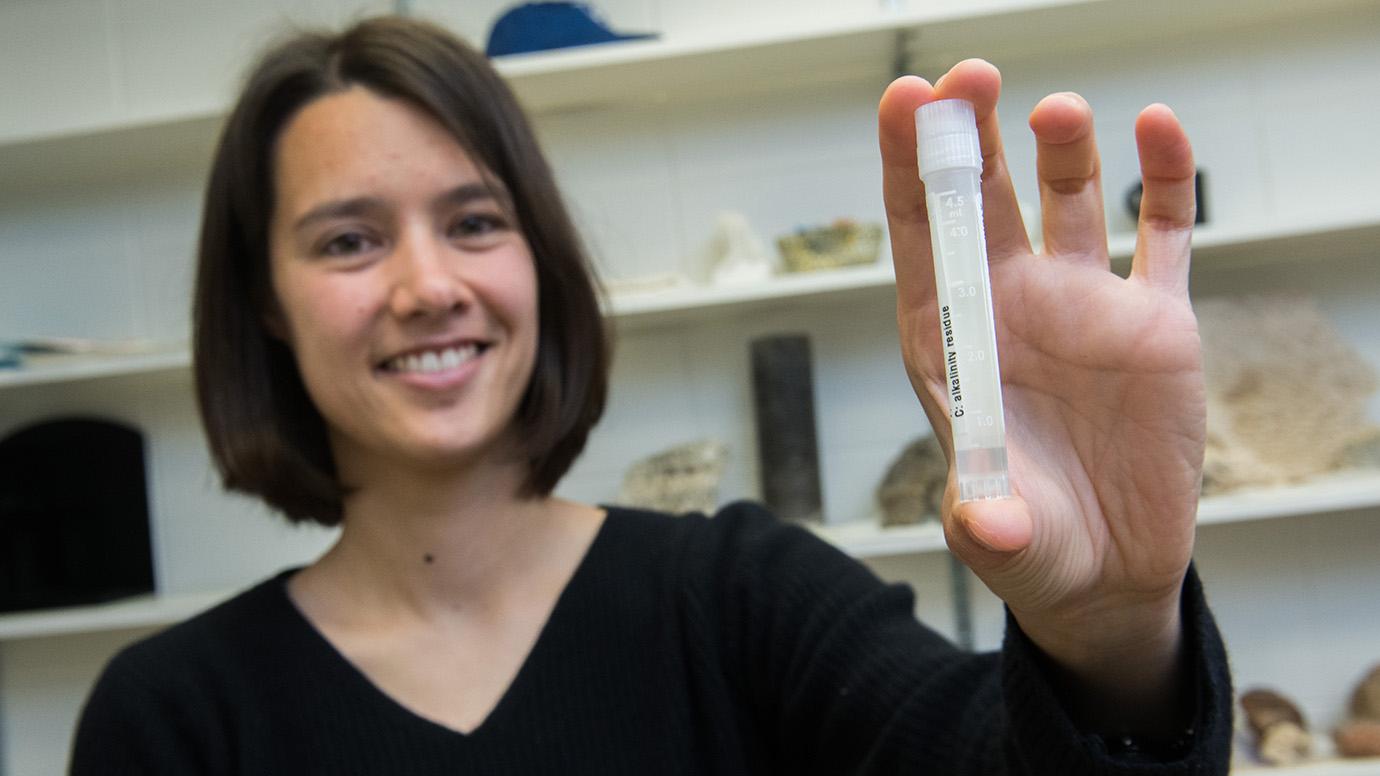 Drops locked inside rock offer clues to modeling Earth’s climate and ocean circulation, say researchers from the University of Chicago.

Twenty thousand years ago, in the thick of an Ice Age, Earth looked very different. Because water was locked up in glaciers hundreds of feet thick, which stretched down over Chicago and New York City, the ocean was smaller—shorelines extended hundreds of miles farther out, and the remaining water was saltier and colder.

Asst. Prof. Clara Blättler with a vial of seawater dating to the last Ice Age—about 20,000 years ago. (Photo by Jean Lachat, UC)

A University of Chicago scientist led a study that recently announced the discovery of the first-ever direct remnants of that ocean: pockets of seawater dating to the Ice Age, tucked inside rock formations in the middle of the Indian Ocean.

“Previously, all we had to go on to reconstruct seawater from the last Ice Age were indirect clues, like fossil corals and chemical signatures from sediments on the seafloor,” said Clara Blättler, an assistant professor of geophysical sciences at the University of Chicago, who studies Earth history using isotope geochemistry. “But from all indications, it looks pretty clear we now have an actual piece of this 20,000-year-old ocean.”

Blättler and the team made the discovery on a months-long scientific mission exploring the limestone deposits that form the Maldives, a set of tiny islands in the middle of the Indian Ocean. The ship, the JOIDES Resolution, is specifically built for ocean science and is equipped with a drill that can extract cores of rock over a mile long from up to three miles beneath the seafloor. Then scientists either vacuum out the water or use a hydraulic press to squeeze the water out of the sediments.

The scientists were actually studying those rocks to determine how sediments are formed in the area, which is influenced by the yearly Asian monsoon cycle. But when they extracted the water, they noticed their preliminary tests were coming back salty—much saltier than normal seawater. “That was the first indication we had something unusual on our hands,” Blättler said.

The scientists took the vials of water back to their labs and ran a rigorous battery of tests on the chemical elements and isotopes that made up the seawater. All of their data pointed to the same thing: The water was not from today’s ocean, but the last remnants of a previous era that had migrated slowly through the rock.

Scientists are interested in reconstructing the last Ice Age because the patterns that drove its circulation, climate and weather were very different from today’s—and understanding these patterns could shed light on how the planet’s climate will react in the future. “Any model you build of the climate has to be able to accurately predict the past,” Blättler said.

For example, she said, ocean circulation is a primary player in climate, and scientists have a lot of questions about how that looked during an Ice Age. “Since so much fresh water was pulled into glaciers, the oceans would have been significantly saltier—which is what we saw,” Blättler said. “The properties of the seawater we found in the Maldives suggests that salinity in the Southern Ocean may have been more important in driving circulation than it is today.

“It’s kind of a nice connection,” she said, “since Cesare Emiliani, who is widely regarded as the father of paleoceanography—reconstructing the ancient ocean—actually wrote his seminal paper on the subject here at the University of Chicago in 1955.”

Their readings from the water align with predictions based on other evidence—a nice confirmation, Blättler said. The findings may also suggest places to search for other such pockets of ancient water.

Other co-authors on the paper were from Princeton University and the University of Miami.