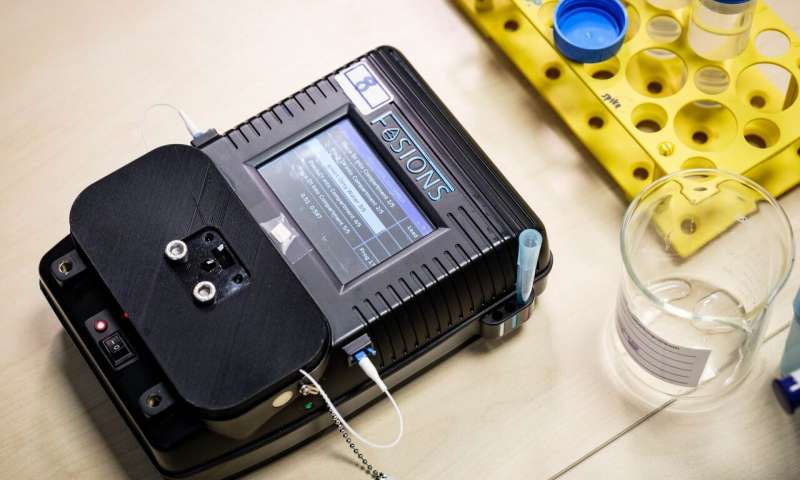 Scientists from Nanyang Technological University, Singapore (NTU Singapore) have developed a portable device, inspired by the ability of the human body, to detect trace levels of heavy metals in drinking water in just five minutes.

The NTU device works in the field and requires just a few drops of a water sample into a disposable sensor cartridge to detect heavy metals at parts-per-billion precision. Credit: Nanyang Technological University

The secret lies in an organic substance within the circulating human bloodstream, called a chelating agent, which can detect and bind to heavy metal ions. After binding, it prevents the heavy metal ions from interacting with other molecules and enzymes in the body, and marks it for excretion from the body.

Combining a chelating agent with an optical measurement system, Associate Professor Yong Ken-Tye and Professor Tjin Swee Chuan from the School of Electrical and Electronic Engineering developed a device that generates test results quickly without needing to bring samples back, making the device convenient for on-site water testing. It could also be integrated into appliances for domestic use, such as water filtration systems.

Drinking water quality is typically monitored via laboratory tests as heavy metals cannot be identified by colour, taste, or odour, unless present at high levels. Lab tests, while highly accurate, take at least a day to complete.

There are some portable devices on the market that can detect heavy metal contaminants quickly, but may require the additional step of mixing the water sample with a buffer solution before the test can be performed. The sensor for such kits also has to be used within 30 minutes after it is exposed to air, as the effectiveness of the sensor can be affected by air, heat, or humidity.

Other mobile alternatives include those that use metal electrodes such as mercury as a sensing probe, which could introduce heavy metal contaminants back into the environment, and test strips that change in colour when they come into contact with heavy metals but leads to results that rely on subjective readings of the strip.

The NTU invention reported in a paper published in the scientific journal ACS Sensors works in the field and requires just a few drops of a water sample into a disposable sensor cartridge to detect heavy metals at parts-per-billion precision.

This level of sensitivity is in line with the safety limit requirements in Singapore that falls within the World Health Organisation’s standards. For instance, the device can detect lead levels of 5 parts per billion, which is lower than the 10 parts per billion limit stipulated by the Environmental Public Health Act in Singapore.

The sensitivity of the sensor in the NTU handheld device is also not limited by exposure to air, and remains effective up to a temperature of 40°C.

Assoc Prof Yong Ken-Tye, holder of the NTU Provost’s Chair in Electrical and Electronic Engineering, said, “Our device is capable of conducting on-site water quality tests quickly and can detect up to 24 types of metal contaminants, which is double the capacity of other commercially available water sensors.

“Using a chelating agent in the device ensures that its sensor is as sensitive in detecting heavy metals as the body’s natural defence mechanism against metal intoxication.”

The device comprises an optical fibre sensor modified with a chelating agent, and a laser that shines through it. This sensor is connected to a processing unit that displays the results of the water quality test (See image below).

In a water sample contaminated by heavy metals, the metal ions will bind to the chelating agent on the optical fibre sensor. This induces a shift in the output light spectrum, from which the device’s processing unit then calculates the concentration of heavy metals in the sample. The process takes about five minutes.

Professor Tjin Swee Chuan, who is also NTU’s Associate Provost (Graduate Education & Lifelong Learning), said, “The device can easily be integrated into any existing in-line water treatment plant. While our product is competitive enough to penetrate the market, we are still working to enhance and expand our water sensor product line. For instance, we are exploring ways to translate this technology for domestic use, such as in domestic water filtration systems and electric water kettles.”

After filing two patents, the NTU team has now successfully incorporated a spin-off, Waterply. It is now working with other local companies to collect more data through their invention to improve the accuracy of the device.

Waterply is also collaborating with a state-owned company in China to develop next-generation water sensors that can tackle water pollution.