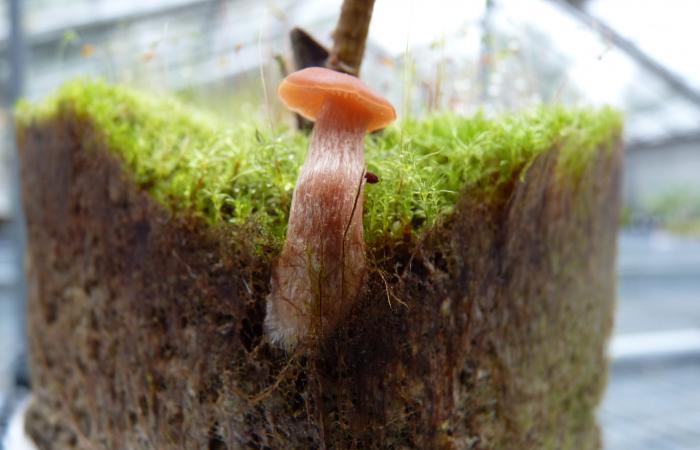 Understanding the relationship between plants and mycorrhizal fungi could lead to an array of benefits in agriculture and bioenergy.

The fungus Laccaria bicolor, in green, is shown colonizing the root of a natural host Populus trichocarpa. A better understanding of plant-fungi symbioses could lead to engineering plant-fungal associations and improve nitrogen and nutrition uptake along with plants’ resistance to drought and pathogens, according to an Oak Ridge National Laboratory-led research team. Credit: Jessy Labbe/Oak Ridge National Laboratory, U.S. Dept. of Energy and Kevin Cope/University of Wisconsin, Madison

A team of scientists led by the Department of Energy’s Oak Ridge National Laboratory have discovered the specific gene that controls an important symbiotic relationship between plants and soil fungi, and successfully facilitated the symbiosis in a plant that typically resists it.

The discovery could lead to the development of bioenergy and food crops that can withstand harsh growing conditions, resist pathogens and pests, require less chemical fertilizer and produce larger and more plentiful plants per acre.

Scientists in recent years have developed a deeper understanding of the complex relationship plants have with mycorrhizal fungi. When they are united, the fungi form a sheath around plant roots with remarkable benefits. The fungal structure extends far from the plant host, increasing nutrient uptake and even communicating with other plants to “warn” of spreading pathogens and pests. In return, plants feed carbon to the fungus, which encourages its growth.

These mycorrhizal symbioses are believed to have supported the ancient colonization of land by plants, enabling successful ecosystems such as vast forests and prairies. An estimated 80% of plant species have mycorrhizal fungi associated with their roots.

“If we can understand the molecular mechanism that controls the relationship between plants and beneficial fungi, then we can start using this symbiosis to acquire specific conditions in plants such as resistance to drought, pathogens, improving nitrogen and nutrition uptake and more,” said ORNL molecular geneticist Jessy Labbe. “The resulting plants would grow larger and need less water and fertilizer, for instance.”

Finding the genetic triggers in a plant that allow the symbiosis to occur has been one of the most challenging topics in the plant field. The discovery, described in Nature Plants, came after 10 years of research at ORNL and partner institutions exploring ways to produce better bioenergy feedstock crops such as Populus, or the poplar tree. The work was accomplished by improvements over the past decade in genomic sequencing, quantitative genetics and high-performance computing, combined with experimental biology.

The scientists were studying the symbiosis formed by certain species of Populus and the fungus Laccaria bicolor (L. bicolor). The team used supercomputing resources at the Oak Ridge Leadership Computing Facility, a DOE Office of Science user facility at ORNL, along with genome sequences produced at the DOE Joint Genome Institute, a DOE Office of Science user facility at Lawrence Berkeley National Laboratory, to narrow down the search to a particular receptor protein, PtLecRLK1. Once they had identified the likely candidate gene, the researchers took to the lab to validate their findings.

The researchers chose Arabidopsis, a plant that traditionally does not interact with the fungus L. bicolor, and even considers it a threat, for their experiments. They created an engineered version of the plant that expresses the PtLecRLK1 protein, and then inoculated the plants with the fungus. The fungus L. bicolor completely enveloped the plant’s root tips, forming a fungal sheath indicative of symbiote formation.

“We showed that we can convert a non-host into a host of this symbiont,” said ORNL quantitative geneticist Wellington Muchero. “If we can make Arabidopsis interact with this fungus, then we believe we can make other biofuel crops like switchgrass, or food crops like corn also interact and confer the exact same benefits. It opens up all sorts of opportunities in diverse plant systems. Surprisingly, one gene is all you need.”

Scientists from the University of Wisconsin-Madison, the Universite de Lorraine in France, and the HudsonAlpha Institute for Biotechnology in Alabama also contributed to the project. The work was supported by DOE’s Office of Science, DOE’s Center for Bioenergy Innovation (CBI) and its predecessor the BioEnergy Science Center (BESC). One of CBI’s key goals is to create sustainable biomass feedstock crops using plant genomics and engineering. Both BESC and CBI have developed experimental and computational approaches that accelerate the identification of gene function in plants.

“This is a remarkable achievement that could lead to the development of bioenergy crops with the ability to survive and thrive on marginal, non-agricultural lands,” said CBI director Jerry Tuskan. “We could target as much as 20-40 million acres of marginal land with hardy bioenergy crops that need less water, boosting the prospects for successful rural, biobased economies supplying sustainable alternatives for gasoline and industrial feedstocks.”

Future work includes continued analysis of the engineered symbiosis and to conduct similar experiments with switchgrass, rice and other plants.