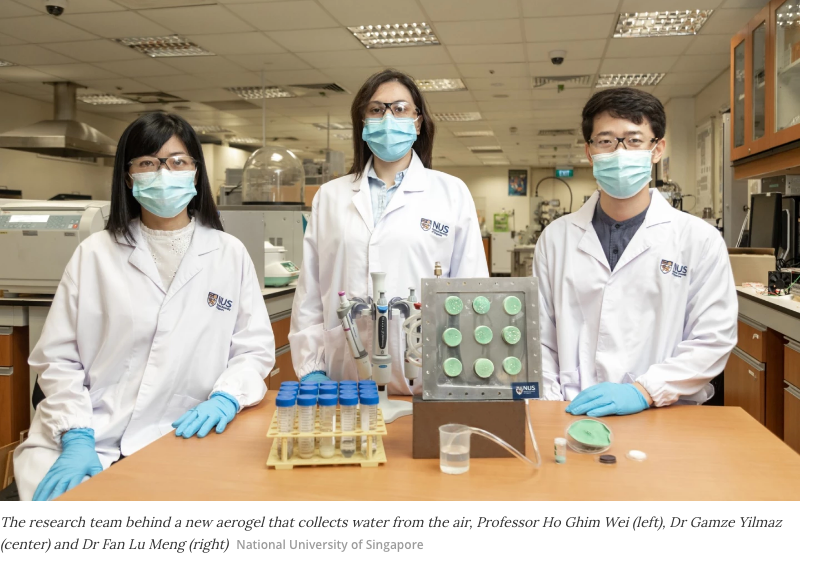 A team from the National University of Singapore (NUS) has put forward a promising example of this type of technology, demonstrating a spongey aerogel that turns airborne water molecules into drinkable liquid, without needing a power source or having any moving parts.

The notion of wringing water out of the atmosphere is an area of scientific research where we are seeing quite a lot of activity. These types of technologies may be sophisticated devices that act as solar-powered greenhouses that release trapped water vapor, or be as rudimentary as nets in the desert that collect moisture from the fog that sweeps through from the sea.

The material created by the NUS engineers also appears a relatively simple solution. The aerogel is made up of long snake-like polymers combined with what’s known as a metal-organic framework, porous structures that are highly valued in many fields of research for their incredibly high surface area.

The team's hybrid material offers just the right chemical structure to continuously and simultaneously attract and repel water. In practice, this means that the aerogel can autonomously collect water molecules from the air, condense them into a liquid and then release it, much like a sponge, although it doesn't need to be squeezed to release its collected cargo. Its performance is enhanced when exposed to sunlight, which promotes its water-repelling abilities and enables it to turn 95 percent of the vapor it absorbs into liquid water.

In laboratory testing, the team was able to demonstrate continuous operation of the material for 1,440 hours, with the water it produced meeting the World Health Organization’s standards for drinkable water. In humid conditions, the researchers report that 1 kg (2.2 lb) of the material can produce 17 liters (4.5 gal) of water per day, though the aerogel is said to weigh almost nothing, so you may need a lot of space to house a collector of that size.

The researchers point to the simplicity of the design, in that it needs no sunlight or electricity to function and involves no moving parts, as its advantages over other water harvesting devices, and they are now looking for commercial partners to ramp up development of the technology.

“Given that atmospheric water is continuously replenished by the global hydrological cycle, our invention offers a promising solution for achieving sustainable freshwater production in a variety of climatic conditions, at minimal energy cost,” says Professor Ho Ghim Wei, who led the research team.

The research was published in the journal  Science Advances.