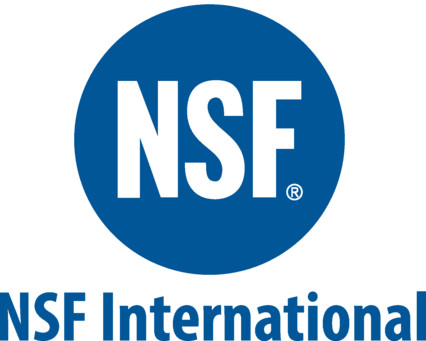 Treatment systems covered by the standard use ultraviolet light to inactivate or kill bacteria, viruses and cysts in microbiologically unsafe water (Class A systems) or to reduce the amount of non-disease-causing bacteria in disinfected drinking water (Class B systems).

“This is a significant update to the drinking water treatment standard. While non-disinfecting LEDs are found in everyday applications such as lighting fixtures and consumer electronics, this use of ultraviolet LED technology is very different. Lab testing shows that ultraviolet LED technology is effective at reducing bacteria and other types of microorganisms in drinking water,” said Jessica Evans, Director of Standards Development at NSF International. NSF is accredited by the American National Standards Institute (ANSI) to develop standards using its consensus-based process with a balanced group of stakeholders.

Originally developed in 1991, NSF/ANSI 55’s scope was limited to low-pressure ultraviolet (UV) radiation systems using low-pressure mercury bulbs, which was the only technology available in the marketplace at the time.

After considering several options, a task group recommended the approach of running a direct log-reduction test with an organism that would represent an entire class of organisms.

The task group concluded that the virus Q-beta is an acceptable surrogate to  Rotavirus  and the test method performs appropriately. This holds true at both ends of the UV wavelength range examined (254 nm to 285 nm). Testing with Q-beta directly is also a simpler, more consistent and less expensive protocol than having to conduct the collimated beam study required in the original protocol.

The existing protocol for current systems will remain in NSF/ANSI 55 for at least five years. Manufacturers will have the option to evaluate their product to the new test method or the older test method defined within the standard. For devices with wavelengths other than 254 nm, the new method using Q-beta would be required and would have the following criteria:

NSF/ANSI 55 was developed following the American National Standards Institute (ANSI) process designed to ensure openness, balance, consensus and due process for all stakeholders. The Drinking Water Treatment Units Joint Committee is comprised of stakeholders representing consumers, the water industry, and state and federal health and environmental agencies in the U.S. and Canada. The joint committee is comprised of 108 people (including 28 voting members, plus observers who offer input and expertise during the standard development process) and is facilitated by NSF International’s standards development group.

As the final step in the standards development process, NSF/ANSI 55 was ratified by NSF’s Council of Public Health Consultants, which includes representatives from the U.S. EPA and the Centers for Disease Control and Prevention (CDC).