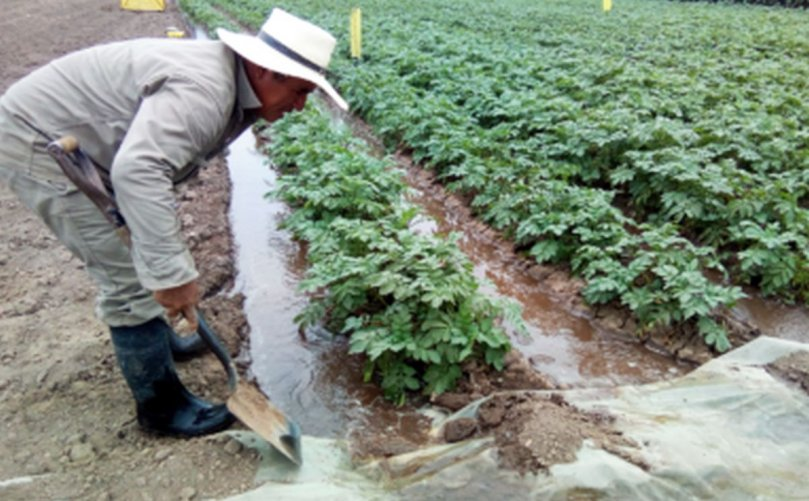 The International Potato Center (CIP) is exploring ways to improve irrigation. Recent research by scientists and students from CIP and the Universidad Nacional Agraria La Molina, in Peru, confirmed that images from infrared (a.k.a. thermographic) cameras can be used to detect water stress in crops, and thereby guide more efficient water use.

A team of researchers led by CIP scientist David Ramírez undertook field experiments at their headquarters, in the rain-deprived city of Lima, Peru, to determine how a combination of color and infrared images can be used to monitor water stress in potato plants.

Researchers took photos of a potato field over the course of the day and used a CIP-developed, open-access software called Thermal Image Processor (TIPCIP) to identify when the plants became so warm that they absolutely had to be watered.

By irrigating only when the plants reached that threshold, researchers were able to greatly reduce the amount of water used to irrigate them.

The smartphone app can help farmers optimize water use.

David Ramírez, a scientist at CIP :


“The goal was to determine the minimum amount of water a potato plant needs to produce a good harvest.”

“A combination of monitoring with infrared images and drip irrigation can allow farmers to reduce the water needed to grow potatoes by at least 1,600 cubic meters per hectare, as much as one half the amount of water used in traditional surface irrigation.”

The potato is naturally water-efficient, producing more calories per liter of water than most crops, and as climate change alters rainfall patterns, that characteristic becomes increasingly important for farmers.

A combination of optimal water management and drought-tolerant varieties could greatly enhance the potato’s water resilience and enable its cultivation in regions where little or no food is currently grown, or during dry months when farmland now lays fallow.

Ramírez explained that while infrared cameras can be mounted on drones to monitor water stress on larger farms, the cost of such equipment is prohibitive for small and medium-sized farmers.

He thus plans to test a new option – a plug-in device the transforms a smartphone into an infrared camera, and costs around USD 200.