Tap water for every household 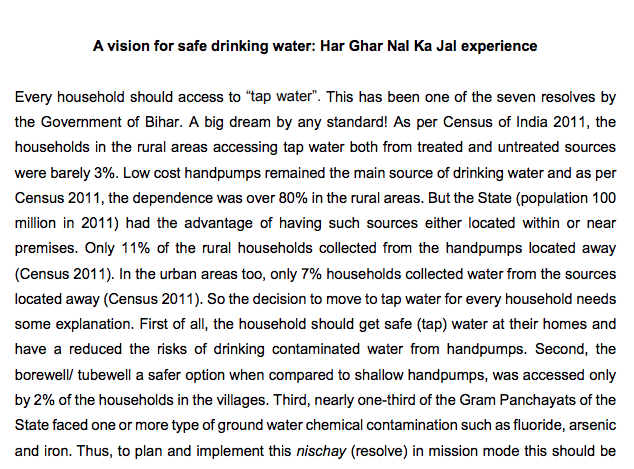 Every household must access to safe  drinking water facility. This is an aspiration and there could be different models.

Government of India aims to provide tap drinking water by 2024. Attached is a case study of tap water for every household planned by one of most populous state Bihar.

A vision for safe drinking water:

Har Ghar Nal Ka Jal experience Every household should access to “tap water”. This has been one of the seven resolves by the Government of Bihar. A big dream by any standard!

But the State (population 100 million in 2011) had the advantage of having such sources either located within or near premises. Only 11% of the rural households collected from the handpumps located away (Census 2011). In the urban areas too, only 7% households collected water from the sources located away (Census 2011). So the decision to move to tap water for every household needs some explanation.

First of all, the household should get safe (tap) water at their homes and have a reduced the risks of drinking contaminated water from handpumps.

Second, the borewell/ tubewell a safer option when compared to shallow handpumps, was accessed only by 2% of the households in the villages.

Third, nearly one-third of the Gram Panchayats of the State faced one or more type of ground water chemical contamination such as fluoride, arsenic and iron. Thus, to plan and implement this nischay (resolve) in mission mode this should be seen as an “unflinching endeavour” to provide clean drinking water in the homesi .

The scheme “Har Gar Nal Ka Jal” received the official approval in the year 2016. Its three components- the population living in the rural areas, quality affected rural habitations and the urban areas represent the implementation of State’s Good Governance programme 2015-20.

Public Health Engineering Department (PHED) of the State Government has the authority to plan and implement drinking water schemes. However, a key shift in the implementation plan under ‘Har Ghar Nal Ka Jal’ Scheme of the State had been the involvement of two more departments-The Panchayati Raj Department for the rural areas and The Urban Development and Housing Department for the urban areas. Now the role of PHED focused mainly on the Gram Panchayats that faced water quality problems. The second shift was involving the community in planning, implementation and operation & maintenance.

The Ward, identified by The Panchayati Raj Department that became the unit, unlike the rural habitations which were traditionally considered for designing water supply schemes. The arrangement worked in case of the installation of deep borewells, handpumps and other spot sources but now the focus had moved to micro and mini sized schemes.

The objective was to provide a single functional tap water connection to every household. Third, operation and maintenance (O&M) of the schemes became the responsibilities of the elected ward members. Typically the implementation in wards engage the local government functionaries in a series of training. Information awareness on O&M of the schemes, the development of water safety plans, water quality tests through laboratories, sanitary inspection of sources and other relevant issues are the part of the training at the local levels that runs like a campaign in a cluster of wards.

Progress till date Almost half of the total targeted wards in the rural areas were achieved by the Panchayati Raj Department. As per the report, a cumulative target to provide potable (safe drinking) water facilities to 58,612 rural wards, work was completed in 28,665 rural wards by the end of FY 2019-20. Similarly, as per the progress in Other than Water Quality Affected areas, PHED reached nearly to the half mark of the cumulative target that was 25,582 wards. But the progress in the water quality areas to address chemical contaminations were as low as 5% (1,405 out of 30,497 wards). In case of urban areas the achievement were 17% (512 out of 3,340 wards) of the cumulative target.

Challenges Ground water based mini and micro projects are comparatively less expensive but have their own challenges in management. Limiting to routine operation and maintenance issues only, mechanical problems like failure of motor have been provisioned with a spare water motor, in order to maintain unhindered supply. Again, the provisions for chlorination to keep away any bacterial contamination have been made.

But to achieve the resolve for every household, the schemes have a long way to go. Here are the two reasons 1) slow progress of the schemes in rural water quality affected areas and urban wards can delay in achieving the target set by the State Government.

2) the provision to achieve eight hours of daily supply of safe drinking water need support of routine maintenance, example the payment of operator’s salary, and infrastructure facilities like the laboratories to conduct water sample tests, trained professional and supplies of equipment. It been an experience that mini and micro-sized piped water supply projects usually have shorter lifespan, mainly because of inadequate support system.

As per ‘Jal Jeevan’ Mission dashboard, little over 12% household in the rural Bihar have now access to functional tap connections . We should expect the next round of Census of India opens up a rational basis for comparison.