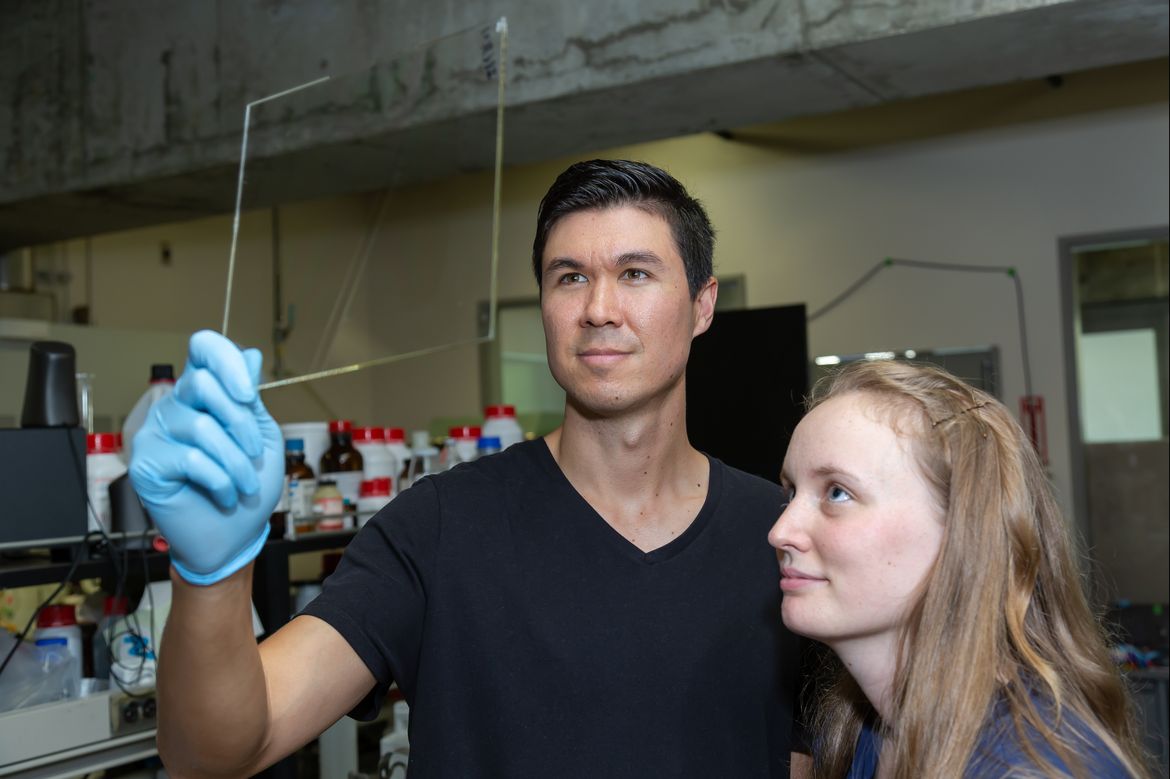 The approach could offer a way for manufacturers to produce more effective and energy-efficient membranes using high-performance plastics, metal-organic frameworks and carbon materials. To date, limitations in how filters are fabricated have prevented those materials from being viable in industrial production.

“There are a lot of materials out there that in the lab can do nice separations, but they’re not scalable,” said Richard Kaner , UCLA’s Dr. Myung Ki Hong Professor of Materials Innovation and the study’s senior author. “With this technique, we can take these materials, make thin films that are scalable, and make them useful.”

In addition to their potential for improving types of filtration that are performed using current technology, membranes produced using T-FLO could make possible an array of new forms of filtration, said Kaner, who also is a distinguished professor of chemistry and biochemistry, and of materials science and engineering, and a member of the California NanoSystems Institute at UCLA. For example, the technique might one day make it feasible to pull carbon dioxide out of industrial emissions — which would enable the carbon to be converted to fuel or other applications while also reducing pollution.

Filters like the ones used for desalination are called asymmetric membranes because of their two layers: a thin but dense “active” layer that rejects particles larger than a specific size, and a porous “support” layer that gives the membrane structure and allows it to resist the high pressures used in reverse osmosis and other filtering processes. The first asymmetric membrane for desalination was devised by UCLA engineers in the 1960s.

In the T-FLO technique, the active layer is cast as a liquid on a sheet of glass or metal and cured to make the active layer solid. Next, a support layer made of epoxy reinforced with fabric is added and the membrane is heated to solidify the epoxy.

The use of epoxy in the support layer is the innovation that distinguishes the T-FLO technique — it enables the active layer to be created first so that it can be treated with chemicals or high heat without damaging the support layer.

The membrane then is submerged in water to wash out the chemicals that induce pores in the epoxy and to loosen the membrane from the glass or metal sheet.

Finally, the membrane is peeled off of the plate with a blade — the “liftoff” that gives the method its name.

“Researchers around the world have demonstrated many new exciting materials that can separate salts, gases and organic materials more effectively than is done industrially,” said Brian McVerry, a UCLA postdoctoral scholar who invented the T-FLO process and is the study’s co-first author. “However, these materials are often made in relatively thick films that perform the separations too slowly or in small samples that are difficult to scale industrially.

“We have demonstrated a platform that we believe will enable researchers to use their new materials in a large, thin, asymmetric membrane configuration, testable in real-world applications.”

The researchers tested a membrane produced using T-FLO for removing salt from water, and it showed promise for solving one of the common problems in desalination, which is that microbes and other organic material can clog the membranes. Although adding chlorine to the water can kill the microbes, the chemical also causes most membranes to break down. In the study, the T-FLO membrane both rejected the salt and resisted the chlorine.

In other experiments, the new membrane was also able to remove organic materials from solvent waste and to separate greenhouse gases.

Mackenzie Anderson, a UCLA doctoral student, is co-first author of the study.

The research was supported by the U.S./China Clean Energy Research Center for Water-Energy Technologies and the National Science Foundation. The project is aligned with UCLA’s Sustainable LA Grand Challenge.

Among the many other devices developed by Kaner’s laboratory is a commercial membrane that separates oil from water and cleans up the debris left by fracking. Fracking is a technique that uses high-pressure mixes of water, sand or gravel and chemicals to extract gas and oil from shale rock.

Kaner is among the world’s most highly cited scientific researchers, and he was one of the 2019 recipients of the American Institute of Chemists’ Chemical Pioneer Award, which honors chemists and chemical engineers for contributions that advance the science of chemistry or the chemical profession.