Technology pulls drinking water from the air, 24 hours a day, with no energy input 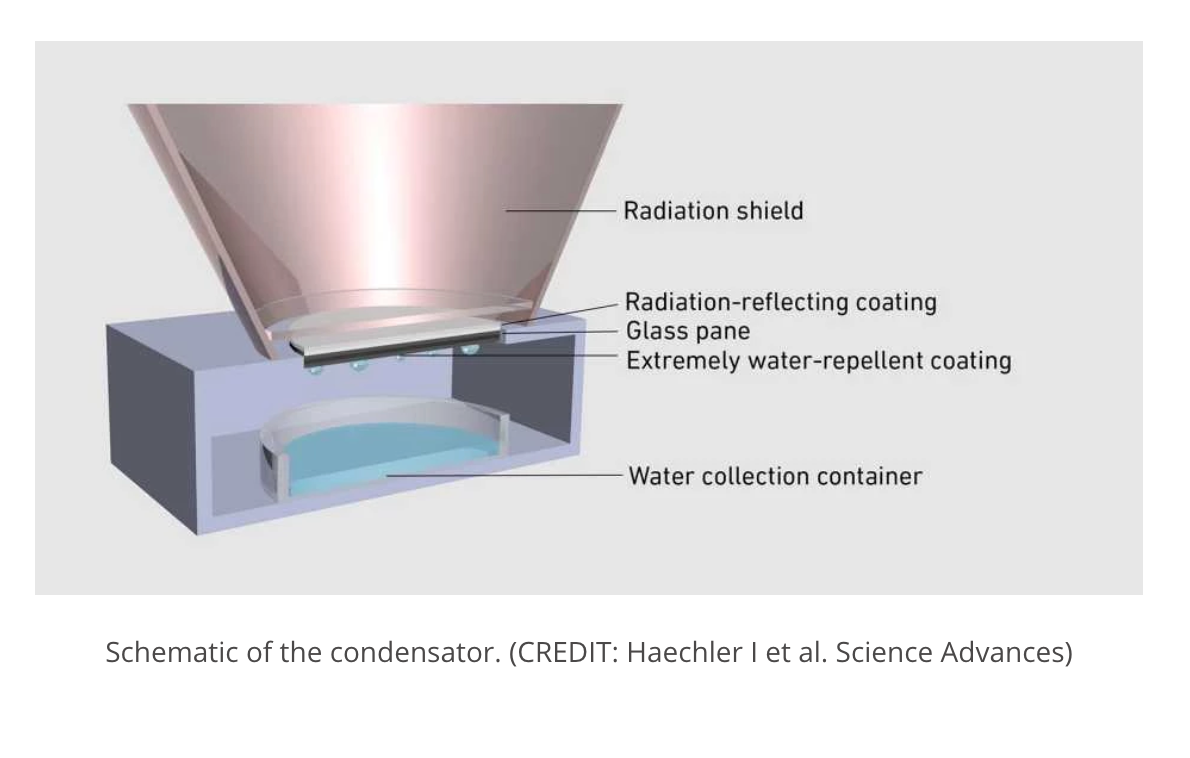 Self-cooling and protection from radiation

Researchers at ETH Zurich have now developed a technology that, for the first time, allows them to harvest water 24 hours around the clock, with no energy input, even under the blazing sun. The new device essentially consists of a specially coated glass pane, which both reflects solar radiation and also radiates away its own heat through the atmosphere to the outer space. It thus cools itself down to as much as 15 degrees Celsius (59 degrees Fahrenheit) below the ambient temperature. On the underside of this pane, water vapour from the air condenses into water. The process is the same as can be observed on poorly insulated windows in winter.

The scientists coated the glass with specifically designed polymer and silver layers. This special coating approach causes the pane to emit infrared radiation at a specific wavelength window to the outer space, with no absorption by the atmosphere nor reflection back onto the pane. Another key element of the device is a novel cone-shaped radiation shield. It largely deflects heat radiation from the atmosphere and shields the pane from incoming solar radiation, while allowing the device to radiate the aforementioned heat outward and thus to self-cool, fully passively.

Close to the theoretical optimum

As tests of the new device under real-world conditions on the roof of an ETH building in Zurich showed, the new technology can produce at least twice as much water per area per day as the best current passive technologies based on foils: the small pilot system with a pane diameter of 10 centimetres delivered 4.6 millilitres of water per day under real-world conditions. Larger devices with larger panes would produce more water accordingly.

The scientists were able to show that, under ideal conditions, they could harvest up to 0.53 decilitres (approximately 1.8 fluid ounces) of water per square metre of pane surface per hour. "This is close to the theoretical maximum value of 0.6 decilitres (2.03 ounces) per hour, which is physically impossible to exceed," says Iwan Hächler. He is a doctoral student in the group of Dimos Poulikakos, Professor of Thermodynamics at ETH Zurich.