The fate of Tonle Sap Lake is decided upriver 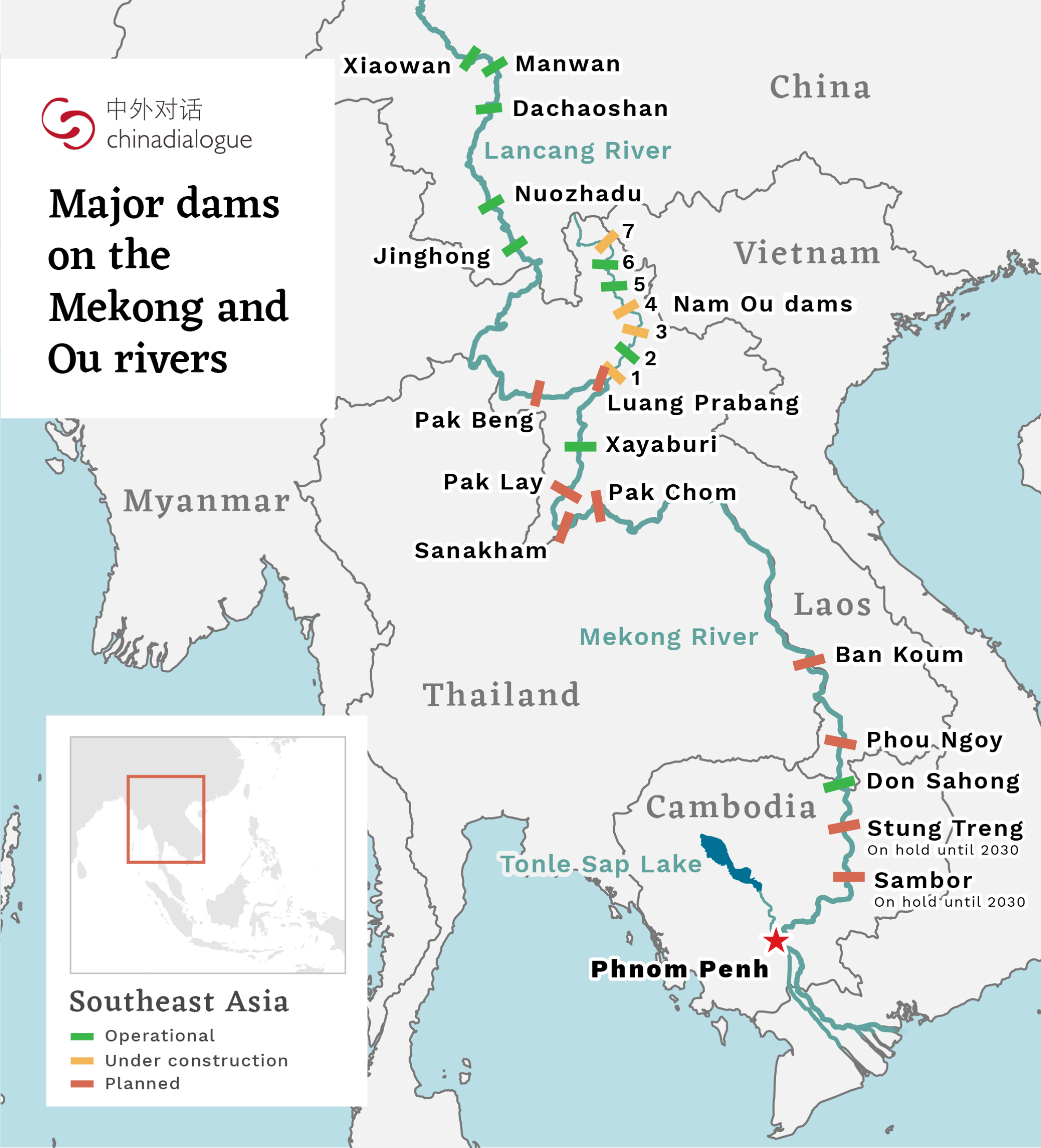 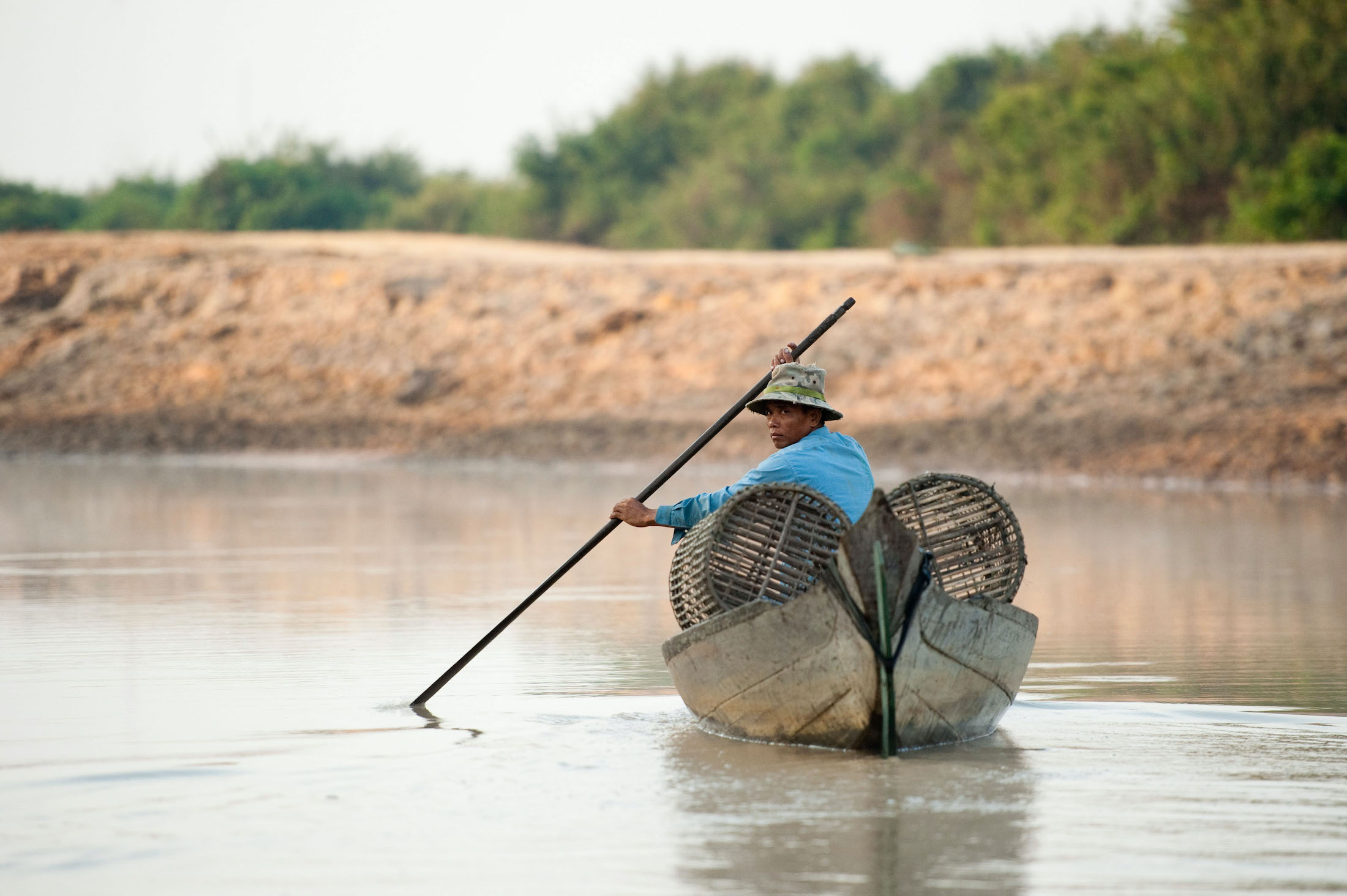 As the Tonle Sap floodplain empties into the Mekong this spring, the Cambodians who rely on these waters face bleak prospects, with fish catches reportedly 10 to 20% of previous years. Blame for the precipitous decline in the ecology has been put on the many hydropower projects upstream.

The Tonle Sap River – pronounced Ton-lay Sap – reverses flow when the Mekong floods in summer. This floods the Tonle Sap Lake, which balloons to five times its low-water size, creating the largest lake in Southeast Asia and supplying one of the most productive freshwater fisheries on Earth. 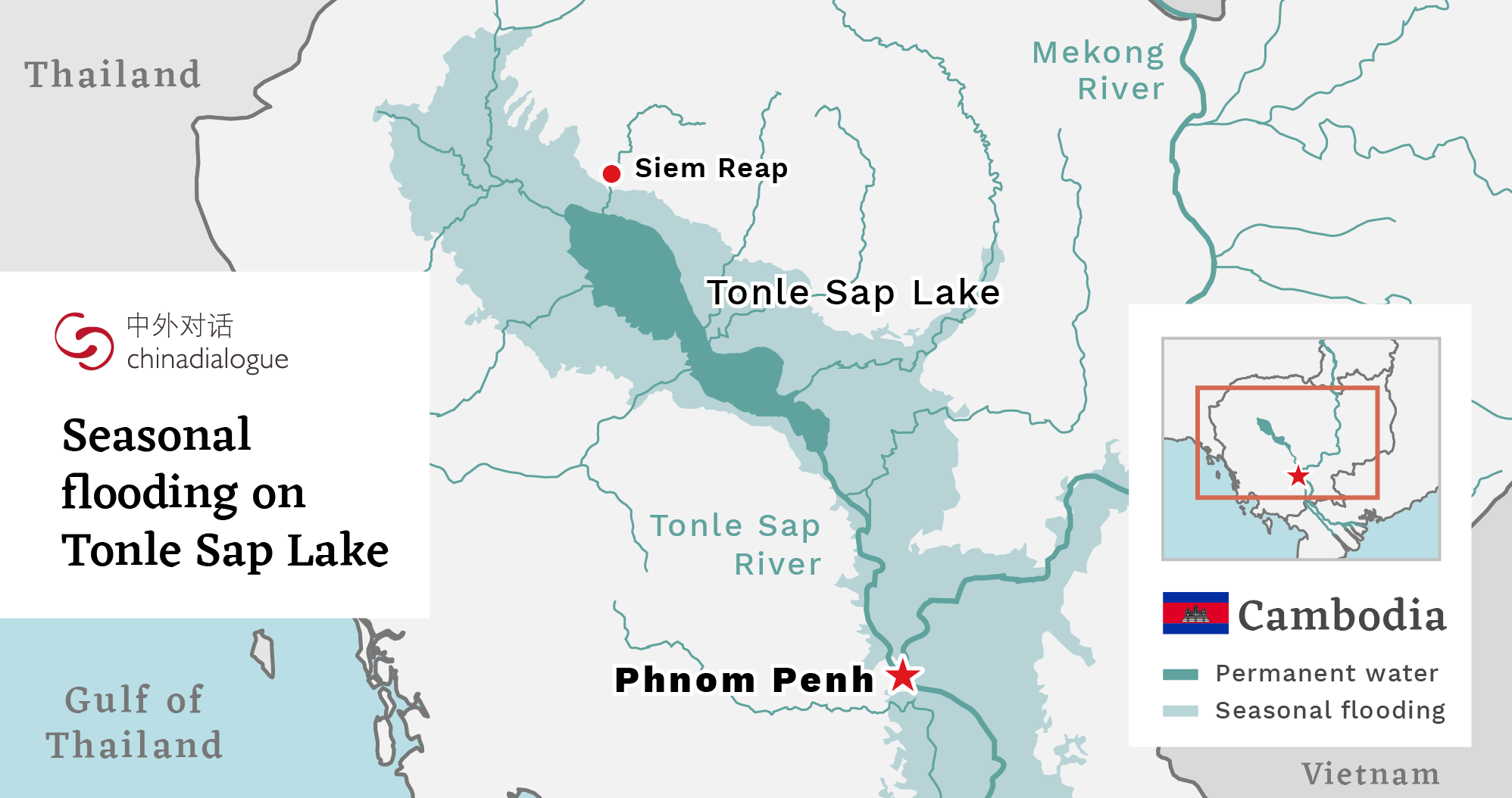 In 2019, a combination of climate change, El Niño and dams on the Mekong and its tributaries caused the Tonle Sap River to reverse in August rather than June and for only six weeks instead of the usual five to six months. The resulting shallow, warm, oxygen-starved waters devastated the fisheries.

Amid pressure from local and international environmental groups, Cambodia took the initiative in March to announce a ten-year moratorium on new dam projects in an effort to protect downstream areas like Tonle Sap. But the problems with Tonle Sap’s fisheries begin much further upstream with hydropower dams in China and the way those facilities manage the storage and release of water.

‘Death by a thousand cuts’

Taber Hand of Wetlands Work, an organisation that provides sustainable water treatment solutions, describes the damage to Tonle Sap as death by “a thousand cuts”. It started with unsustainable fishing in the 1990s and was followed by damming of most of the 27 tributaries into the lake for dry season irrigation.

More than 1,300 kilometres north of the lake, China began damming the Lancang – its section of the Mekong – in 1986 with the Manwan Dam. In the following decades, China built 11 more mega-dams on the Lancang which comprises more than half of the sediment crucial to the Mekong’s ecology. The northernmost of the dams is Yunnan’s 990-megawatt Wunonglong Dam high in the Himalayas of the Diqing Tibetan Autonomous Prefecture, which was completed in 2019. They continue down to Jinghong near the lush forests of Xishuangbanna. More dams are planned even closer to the Thai border at Ganlanba and Mengsong. 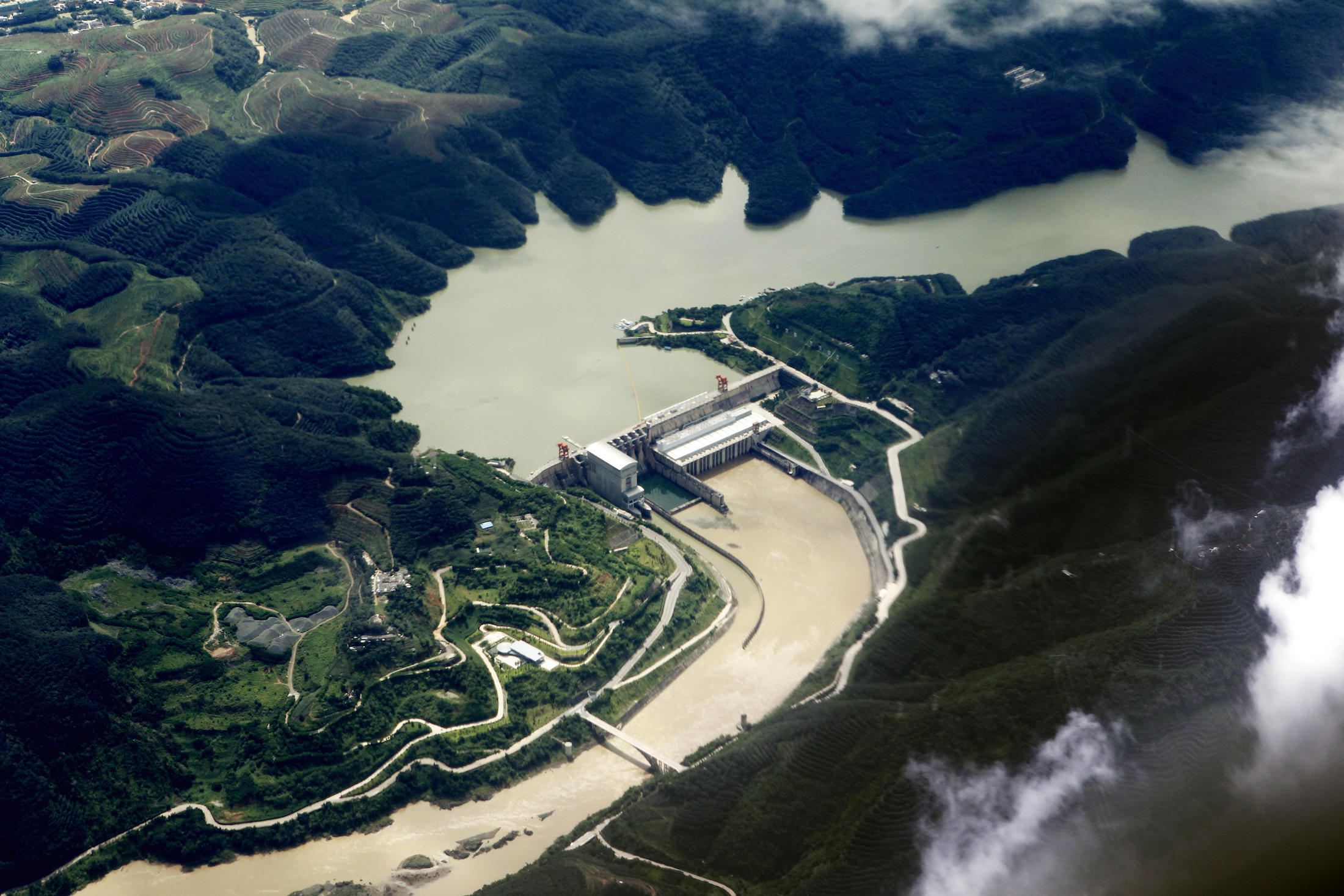 Using satellite imagery and river height gauges, an April study from Eyes on Earth, a water resources monitor, gave credence to suspicions that Lancang water policies were partly responsible for the record droughts experienced throughout the Mekong region in 2019.

“The satellite data does not lie and there was plenty of water in the Tibetan Plateau, even as countries like Cambodia and Thailand were under extreme duress,” Alan Basist, who co-wrote the report for Eyes on Earth, told The New York Times. “There was just a huge volume of water that was being held back in China.”

According to the report, during the 2019 drought – which saw the Mekong at century-low levels and the late reversal of Tonle Sap River – China’s portion of the Upper Mekong received uncommonly high levels of rain but the resulting flow was stopped by the Lancang dams.

The report, which collected data from 1992 to 2019, states the algorithm’s “wetness index” could be used to simulate natural flow conditions via cooperation among the dams on the Mekong mainstream. The increased dams on the Mekong mean unprecedented control over the river’s flow, but at present few governance mechanisms between China and lower Mekong nations provide relevant, timely solutions.

Even if natural flow conditions for the Mekong could be properly simulated, it wouldn’t address the loss of sediment and changes to fish migration patterns that are crucial to the ecology of places like Tonle Sap Lake. Combined with the shorter monsoon season and a longer dry season because of climate change, Tonle Sap’s ecosystem – from the giant Mekong catfish to the spot-billed pelicans – has strained.

Laos and Cambodia have also been keen to use hydropower to meet their growing power needs. Cambodia in particular, which relies on hydropower for 48% of its domestic power production, saw massive power outages in 2019. Don Sahong Dam near the Laos-Cambodia border is the nearest Mekong mainstream dam to Tonle Sap, constructed by Sinohydro and at the insistence of Laos. It started producing power in early 2020.

“It’s not all in China’s control. China has 100% control of dams within Yunnan, yet they may not have 100% control of dams in the lower Mekong,” Taber Hand says. When asked what could be done to help Tonle Sap’s fisheries, Hand responded, “Whoever owns or controls the Don Sahong Dam in Laos would have to agree to take it out.” 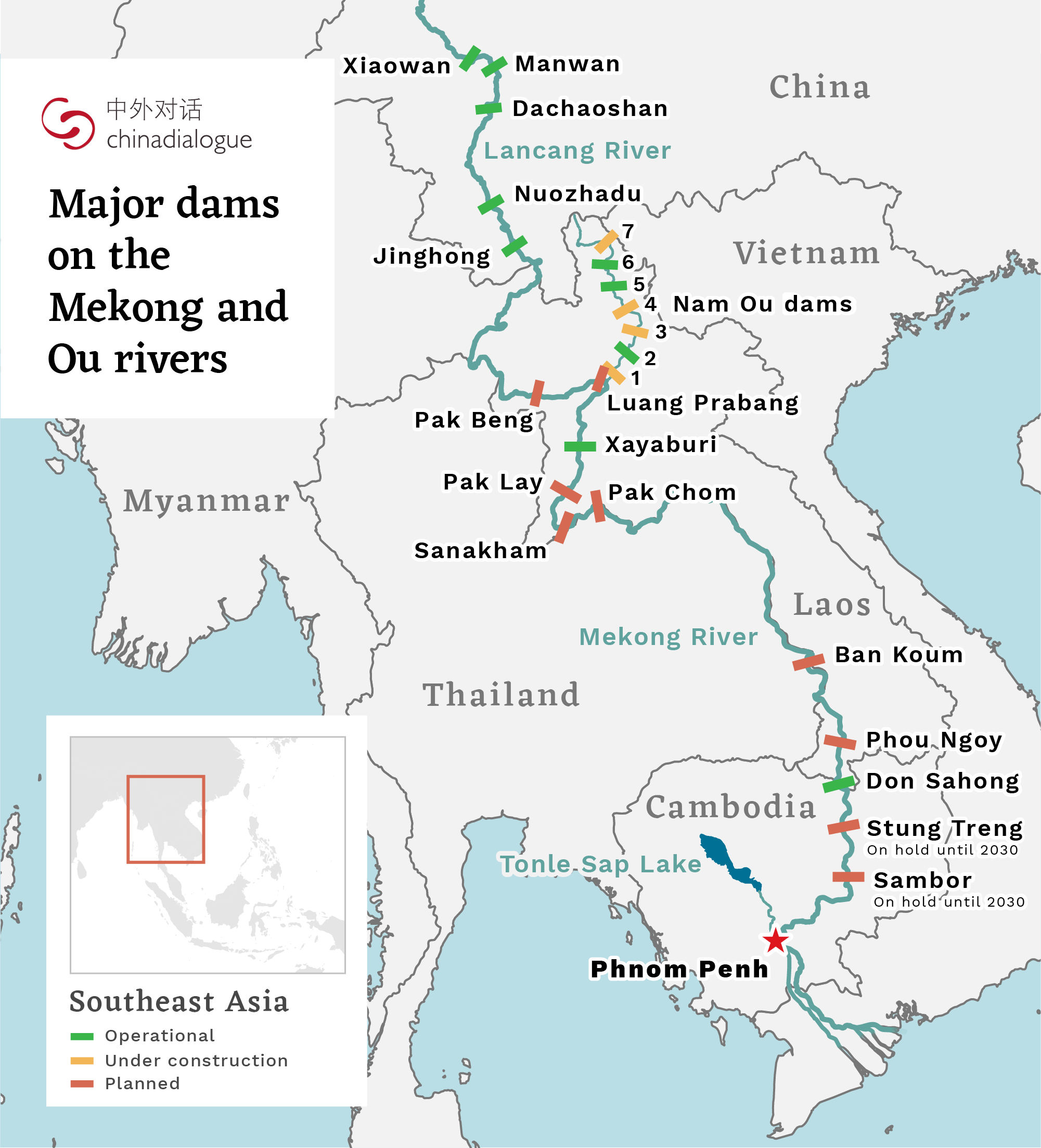