The Importance of Algal Monitoring in Finfish Aquaculture 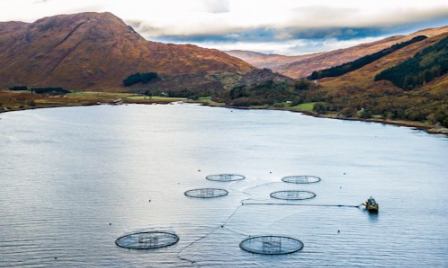 An algal bloom is believed to have killed thousands of Atlantic salmon at a finfish aquaculture site in Scotland, last week. Warmer water temperatures over recent weeks are suspected to have been the cause of the bloom in Loch Fyne, reports the BBC.

This is a story we hear time and time again in the news with regard to salmon farming. Algal blooms are a phenomenon caused by increases in water temperature and nutrient availability, either through anthropogenic inputs or natural environmental fluctuation. However, it is not always necessarily a local event as blooms are regularly transported by ocean currents and wind.

Algal blooms can cause problems for fish producers in a number of ways. The most prominent issue in the news is that of Harmful Algal Blooms, blooms of algal species that produce toxins that directly affect the fish, such as Karenia mikimotoi.

However, it is not only the harmful algae that are a problem. Chain-forming, spiny diatoms, such as Chaetoceros , can actually block and damage the gills of fish, reducing their ability to cope with oxygen stress. In certain areas such as Scotland, where Amoebic Gill Disease (AGD) can be a problem, algal blooms can exacerbate the issue. As algal blooms respire through the night, oxygen levels can become severely depleted, leading to suffocation.

So, what is being done to minimise the impact of algal blooms in finfish culture? Normally, depending on the location and regulatory body, water samples are required every 1-2 weeks to assess levels of toxic algae in the water. Other initiatives are also in place, such as remote sensing using satellite data to give an early warning of the onset of an algal bloom. Early warning of algal blooms are crucial to farm operators as it allows them to employ management practices to minimise the effect of algal blooms. For example, if a bloom is suspected, operators can increase the aeration in the farm to help avoid suffocation or can cease feeding to allow the fish to ‘settle’ further down in the water column and minimise contact with the algae at the surface.

Although these initiatives are certain to help in the early detection of algal blooms and the identification of toxic species, they still have their limitations. Diurnal variation in algal populations will be poorly understood from weekly sampling and an algal bloom could easily be missed through this routine. Additionally, satellite measurements rely on clear skies and measurements can be intermittent.

Continuous, in-situ algal monitoring is therefore crucial to understanding diurnal, seasonal and environmental variability at culture sites and could significantly contribute to the early detection of algal blooms. Coupled with local hydrographic models, sensors such as the TriLux from Chelsea Technologies can be placed in strategic areas to continuously monitor for any incoming blooms, allowing operators to employ management practices to minimise the risk to their livestock. In addition to this, long-term, continuous data-sets could be used to improve current understanding and models of the biology at these sites.

The Chelsea TriLux is a three-channel fluorometer for algal monitoring with a choice of chlorophyll a, phycocyanin, phycoerythrin and turbidity measurements. In-situ species identification can be incredibly tricky, but sensors installed on-site would be able to detect any rise in algal pigments and could prompt samples to be taken and species identified either by trained personnel or other means of technology.

With the apparent increase in algal bloom incidence and severity, possibly due to rising water temperatures and increase anthropogenic inputs, the need for improved forecasting and mitigation of algal blooms is more relevant than ever. With a rising global population and the increased demand for protein from developing countries, solving these issues will be crucial to ensuring future global food security.