The US Clean Water Act on its 50th birthday 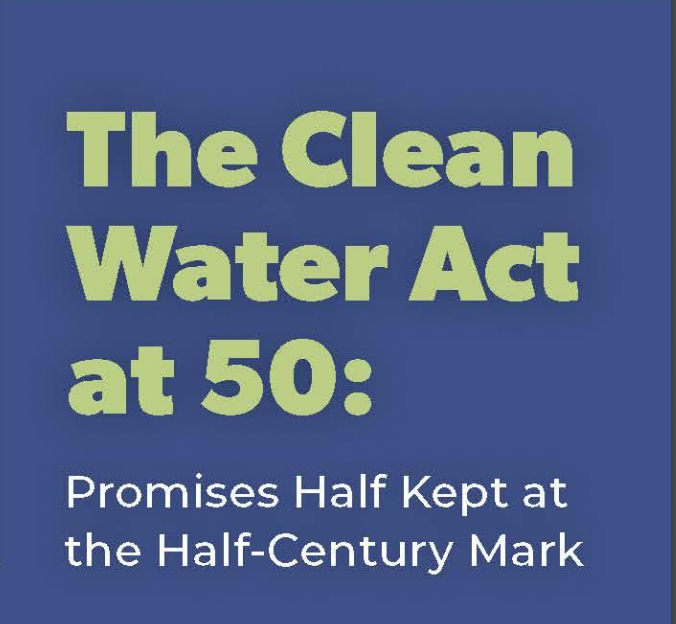 Ninety-three percent of Iowa's 4,921 miles of assessed waterways are impaired for swimming and recreation

DES MOINES, IA -- A half century after the passage of the landmark federal Clean Water Act, and almost four decades after the law’s deadline for all waters across the U.S. to be “fishable and swimmable,” 50 percent of assessed river and stream miles – 703,417 miles nationally -- are so polluted they are classified as “impaired,” according to a new report by the Environmental Integrity Project (EIP).

Agriculture is the main driver of water pollution in Iowa. More than 30 million acres of the state, or over 85 percent, is farmland. The Hawkeye State is the leading pork-producing state in the nation, with the state’s 23 million pigs producing as much feces as 83 million people.

“The Clean Water Act is landmark legislation that has addressed industrial pollution in our nation’s waterways,” Alicia Vasto, the Water Program Associate Director for the Iowa Environmental Council, said. “However, agricultural states like Iowa suffer from the loophole that almost entirely exempts the agricultural industry from oversight. This has led to agriculture becoming the number one polluter of our nation’s waterbodies.”

“The Clean Water Act should be celebrated on its 50th birthday for making America’s waterways significantly cleaner,” said Eric Schaeffer, Executive Director of the Environmental Integrity Project (EIP) and former Director of Civil Enforcement at EPA. “However, we need more funding, stronger enforcement, and better control of farm runoff to clean up waters that are still polluted after half a century. Let’s give EPA and states the tools they need to finish the job – we owe that much to our children and to future generations.”

EIP’s report uses state data across the U.S. to also show that 55 percent of lake acres that have been studied and 25 percent of assessed bays and estuaries are impaired -- meaning they cannot be used safely for one or more public uses, such as swimming, fishing, or as sources of drinking water. 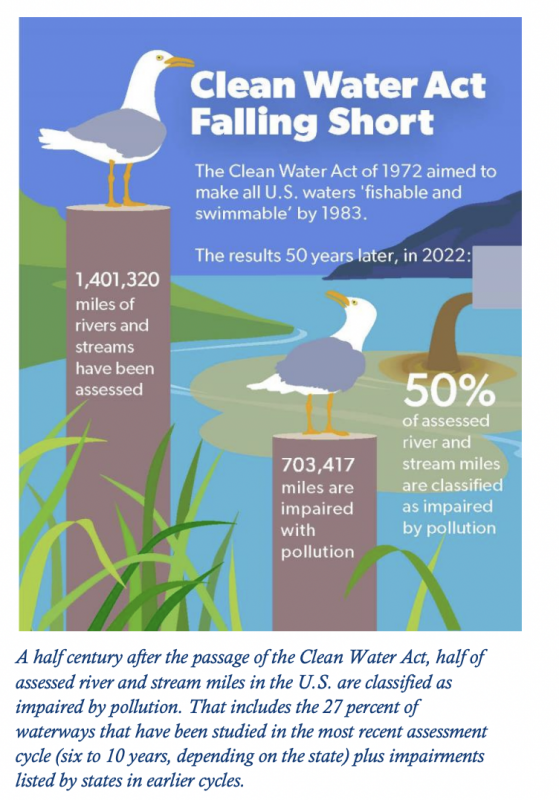 Executive Summary This year will mark the 50th anniversary of the federal Clean Water Act of 1972. The law was a crowning achievement of the environmental movement, inspired in part by flames on the Cuyahoga River in Ohio, shame over sewage in the reeking Hudson, and rage over record-breaking fish kills in Lake Thonotosassa, Florida.

The Act directed more than $1 trillion in investments into wastewater treatment plants and drove substantial improvements in water quality, especially in its first three decades.

But the improvements slowed over time, and the landmark law, a half-century later, remains far from its ambitious goals of producing “fishable, swimmable” waters across the U.S. by 1983 and the complete elimination of pollution into America’s navigable waters by 1985.

The Clean Water Act requires states to submit periodic reports on the condition of their rivers, streams, lakes, and estuaries to the U.S. Environmental Protection Agency.

Based on the latest of those reports, about half of the river and stream miles and lake acres that have been studied across the U.S. are so polluted they are classified as “impaired.” That means they are too polluted to meet standards for swimming and recreation, aquatic life, fish consumption, or as drinking water sources. The same is true for a quarter of assessed bay and estuary square miles. These figures do not include many waterways where conditions remain unknown because they have not been examined recently. For example, about 73 percent of river and stream miles have not been studied in the most recent assessment cycle (six to 10 years, depending on the state.) A number of obstacles account for the shortfall in meeting the goals of the Clean Water Act, including limitations in the law itself.

A half century after the passage of the Clean Water Act, half of assessed river and stream miles in the U.S. are classified as impaired by pollution. That includes the 27 percent of waterways that have been studied in the most recent assessment cycle (six to 10 years, depending on the state) plus impairments listed by states in earlier cycles.