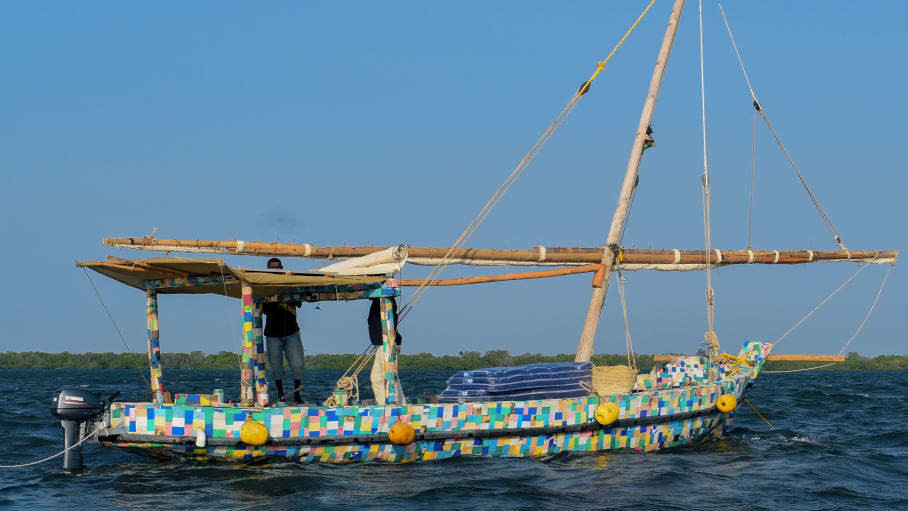 The Flipflopi boat is made of 10 tonnes of discarded plastic, including 30,000 flip-flops. Image: CNN

Last year, the recycled Flipflopi boat sailed from Kenya to Tanzania to raise awareness of plastic pollution in the world’s oceans.

It is made from 10 tonnes of discarded plastic, including 30,000 flip-flops.

Now it will visit Kenya, Tanzania and Uganda to campaign for a ban on single-use plastic.

There are around 51 trillion microscopic pieces of plastic in the sea, according to Surfers Against Sewage.

What’s nine metres long, made from recycled plastic rubbish, and sails the waters of East Africa highlighting the need to dispose of plastic waste responsibly?

The Flipflopi, a traditional single-masted sailing boat (or dhow) made – less traditionally – from more than 10 tonnes of plastic and more than 30,000 flip-flops.

From seashore to lakeside

Launched in 2018 from the island of Lamu in Kenya, the Flipflopi has taken part in the UN Environment Programme Clean Seas initiative and has sailed from Kenya to Tanzania, a voyage of 500 kilometres, to help spread the message.

Now the dhow is getting ready for its second major excursion: the ‘upstream expedition’ will see the Flipflopi crew set sail along inland waterways. Coinciding with World Cleanup Day on 19 September, the boat will be relocated to the Kenyan city of Kisumu on the shores of Lake Victoria, the second-largest freshwater lake in the world.

From there, the Flipflopi will set sail on a four-week journey in early 2021, circumnavigating the lake, stopping off at the three countries that border it – Kenya, Tanzania and Uganda.

What is the World Economic Forum doing about plastic pollution?

More than 90% of plastic is never recycled, and a whopping 8 million metric tons of plastic waste are dumped into the oceans annually. At this rate, there will be more plastic than fish in the world’s oceans by 2050.

It aims to show how businesses, communities and governments can redesign the global “take-make-dispose” economy as a circular one in which products and materials are redesigned, recovered and reused to reduce environmental impacts.

Plastic has revolutionized many aspects of daily life. Its use in clinical settings allows for sterile implements and medicines to be safely packaged and transported. And when used to wrap fresh food, it can reduce damage and prolong shelf-life.

But single-use plastic, discarded and not properly disposed of, has become a significant pollution problem. There are currently around 51 trillion microscopic pieces of plastic in the world’s oceans, according to the pressure group, Surfers Against Sewage.

In 2014, over 5 trillion pieces of plastic were estimated to be polluting the world’s oceans. Image: Our World in Data

Many African nations have already started phasing out the use of some plastic items, particularly bags. But others argue it’s a problem best tackled at source, with the producers of plastics being held to account.

The upstream campaign aims “to change mindsets about plastic pollution and the urgent need to preserve our environments”. It will also raise awareness of a petition calling on East African countries to implement a ban on all single-use plastics.