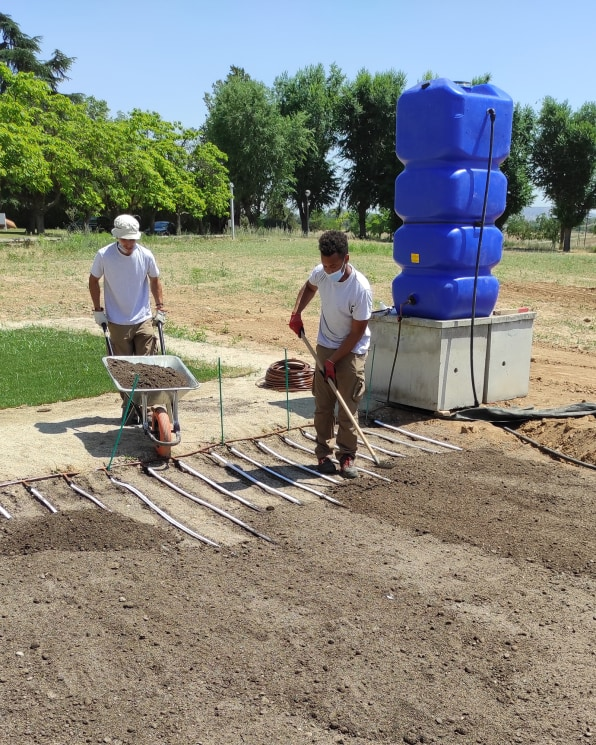 On farms in some drought-stricken areas, some farmers now use drones to fly over fields so they can better see exactly when to water crops. But a technology called GrowStream is even more precise: The irrigation system communicates directly with plants.

When plants get thirsty, they release a particular chemical into the surrounding soil. The technology, from a company called Responsive Drip Irrigation, uses tubes that are embedded with a pore-filled polymer that can sense those chemicals. “When the plants give off the chemicals, micropores start releasing the water,” says Jan Gould, founder of Responsive Drip Irrigation. “So the water starts free-flowing, and the plants can slowly drink what they need.” When the plants have enough water, they stop emitting the chemical, and the pores close, turning the tubes into a tiny underground stream until the plants need irrigation again. The system can also be used to deliver fertilizer or soil amendments directly to the roots of plants.

The technology, originally developed by a chemistry professor, is now in use in places like Abu Dhabi, where farmers are growing local vegetables in the desert. It saves substantially more water than drip irrigation, another type of system that emits water out of small tubes. It can also help beyond farms: In Los Angeles, the company is currently working with the local water utility to test using it on urban landscaping. “If you tear out all the turf and tear out the plants, you create another set of issues —creating a heat island in the city with too much concrete and hardscapes,” says Gould. “Plants are important in the environment. So what they were looking to do is find out ways to keep some green, but to use less water to do it.” In side-by-side tests with a drip irrigation system in the L.A. pilot, the newer technology used 45% to 50% less water

The biggest challenge for the company now is convincing farmers to pay to shift from irrigation systems that they may have used for decades. It might be especially challenging in a place like California’s Central Valley, where many farmers work together in a system in which the extra water used in “flood” irrigation on one farm flows back into a river or aquifer for the next farmer to use. Right now, the company is working in 14 countries, in locations ranging from smallholder farms in Zimbabwe to residential lawns in Utah. “Wherever there’s an issue with water scarcity and food security, we want to be there,” Gould says.