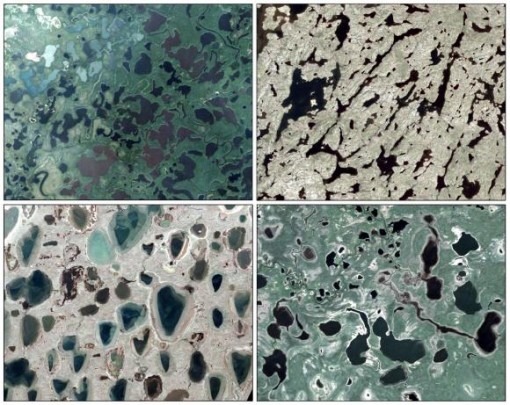 In a finding that has implications for how scientists calculate natural greenhouse gas emissions, a new study finds that water levels in small lakes across northern Canada and Alaska vary during the summer much more than was assumed.

Using an army of small satellites, researchers have shown that water levels in small lakes across northern Canada and Alaska are far more variable during the summer than previously thought. The findings, published in Geophysical Research Letters, could have implications for how scientists calculate the natural greenhouse gas emissions from these northern lakes. 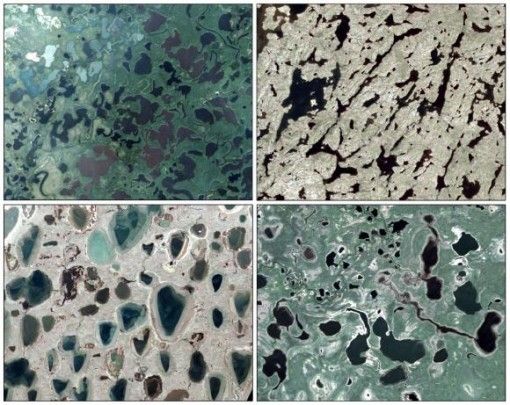 The study used images taken by a network of more than 150 CubeSats — small satellites about the size of shoeboxes — which made nearly daily observations of more than 85,000 small North American lakes during the summer of 2017. The images enabled the researchers to see how the lakes changed over time. They found small but significant shoreline changes in individual lakes that added up to hundreds of square kilometers of lake area change across the study region.

“There’s been a lot of research on climate-driven changes in lake area, but it’s mainly focused on long-term changes,” said Sarah Cooley, a Ph.D. student at Brown University and the study’s lead author. “This is the first time that anyone has looked at fine-scale, short-term changes, and we found that there’s much more variability within a season than expected.”

The study area captures a substantial swath of Arctic tundra and boreal forest, a biome that circles the Earth’s northern hemisphere in a band from about 50 to 70 degrees north latitude. The region is home to critical forest and tundra ecosystems as well as the planet’s highest density of lakes, so understanding its hydrology is scientifically important. One reason for that is that boreal lakes are a significant source of natural greenhouse gas emissions. Their sediments contain tons of organic carbon, which washes in from the surrounding landscape. Some of that carbon then decomposes and it emitted into the atmosphere in the form of carbon dioxide and methane greenhouse gases.

This new finding of substantial summer shoreline fluctuation has implications for how scientists calculate these emissions, the researchers say. That’s because shoreline areas where water ebbs and flows from season to season are known hotspots for greenhouse gas production and emission. But estimates of lake emissions generally assume shorelines to be stable within each season. The finding of surprising within-season shoreline fluctuation, the researchers say, suggests that current emissions models from boreal lakes may be underestimated.

“A shoreline that’s fluctuating is going to emit more carbon than a stable shoreline,” Cooley said. “These short-term fluctuations, which no one had ever mapped before, suggest these lakes are potentially emitting more gas than people thought.”

Another finding that surprised the research team was the large overall importance of shoreline fluctuations on the ancient Canadian Shield, a rocky, wet landscape in central Canada where millions of small lakes cover 20 percent of the landscape.

“Previous studies assumed lakes in this area to be relatively stable,” said Laurence C. Smith, a co-author of the study and project leader for NASA’s Arctic-Boreal Vulnerability Experiment, which helped fund the study. “To our surprise, the high-resolution, high-frequency imaging afforded by CubeSats revealed that small shoreline fluctuations in this lake-rich area sum to impressively large numbers.”

In all, the study explored four sub-areas of the North American Arctic and sub-Arctic and found the little-studied Canadian Shield to be most dynamic of all, with about 1.4 percent of its landscape seasonally inundated by small fluctuations in lake levels.

Another takeaway from the study, Cooley says, is that it shows the power of CubeSats to acquire data that larger satellites can’t gather.

“What I’m most excited about from a science perspective is the ability to make use of this new CubeSat imagery,” Cooley said. “We couldn’t have made these observations without the CubeSats, and here we show that it’s possible to extract valuable scientific information from those images.”

Large space agency satellites festooned with sensitive scientific instruments can gather all sorts of information, but simply don’t make enough overhead passes to catch changes that occur over short periods of time. And the satellites that do pass over on a daily basis lack the camera resolution to make fine-scale observations of lake area.

The CubeSats, recently launched by a company called Planet, offered a potential solution. The company operates more than 150 satellites, which orbit the Earth in an arrangement that enables them to image Earth’s entire landmass each day as the planet rotates beneath them. And while the tiny satellites lack sophisticated scientific equipment, they do have high-powered cameras capable of capturing images with 3-meter resolution.

But the CubeSat data present some unique challenges, Cooley says. For example, the location data from CubeSats tend not to be as precise as those from space agency satellites. And the CubeSat images lack filters that make them easier to analyze. NASA or European Space Agency (ESA) satellite data are filtered to eliminate images taken on cloudy days or other low-quality images.

So Cooley had to design her own system to compensate for those issues. For the study, she trained a machine learning algorithm to spot anomalous data patterns and throw them away. For example, instances in which a lake suddenly disappears in a day only to return to view a few days later are most likely due to cloud cover or glitchy observations, not an actual lake disappearance. The algorithm could flag such instances and remove them from the data.

Using that algorithm, Cooley and her colleagues were able to sift through more 25 terabytes of CubeSat data. Cooley says she expects more interesting earth science findings to come from CubeSats in the coming years.

“I see this as a beginning of a new period in remote sensing, in that suddenly all sorts of earth observations that may not have been possible before will become possible with these small, simple satellites,” Cooley said.

The research was funded by the NASA Terrestrial Ecology Program Arctic-Boreal Vulnerability Experiment and a National Science Foundation graduate fellowship to Sarah Cooley. Other coauthors on the paper were Jonathan Ryan, Lincoln Pitcher and Tamlin Pavelsky.

Source: Institute at Brown for Environment and Society