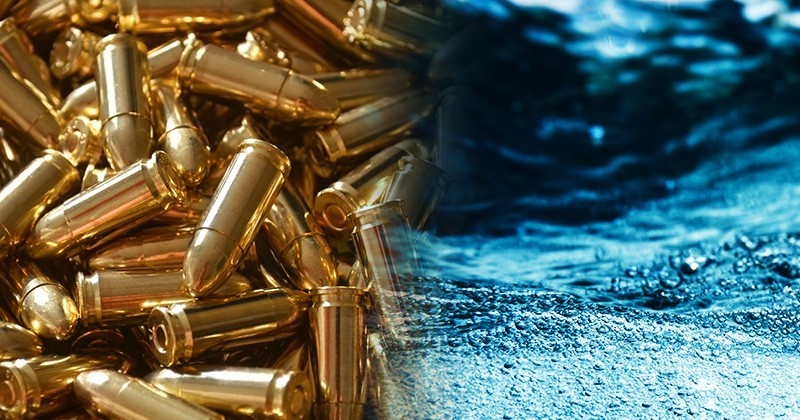 Through a grant from the U.S. Department of Defense, UD professors Pei Chiu and Daniel Cha are working with Brian Hubbard, an environmental, safety and occupational health officer with the U.S. Army, to break down explosives in wastewater.

An activated carbon filter — found in many household filtration systems—can purify your drinking water, but it’s no match for wastewater that contains military-grade explosives. To clean wastewater from munitions processing and demilitarization, a pair of University of Delaware environmental engineering professors and a UD engineering alumnus are teaming up to test a novel technology using iron nanoparticles.

Through a grant from the U.S. Department of Defense (DOD), professors Pei Chiu and Daniel Cha are working with Brian Hubbard, an environmental, safety and occupational health officer with the U.S. Army, to break down explosives in wastewater. The three-year grant, which began in 2019, comes from DOD’s Environmental Security Technology Certification Program (ESTCP). Hubbard, who received a bachelor’s degree and master’s degree in environmental engineering from UD, is the principal investigator, and Cha and Chiu are collaborators on the project. Several students, including undergraduate environmental engineering student Aidan Meese, are also participating in the project.

Old-school explosive compounds such as TNT detonate easily and can go off accidentally in the presence of vibrations or sudden temperature increases. The sensitivity of these munitions poses risks for people who handle them, so today, the military is producing insensitive munitions that are more difficult to set off. Insensitive munitions are safer for users, though are more water soluble than their historical counterparts. These materials dissolve easily in water used in the manufacturing and related processes and can exist in water at much higher concentrations.

“The current treatment methods, such as activated carbon adsorption, are not very effective at removing these highly soluble munitions compounds,” said Chiu. (Adsorption is the adhesion in an extremely thin layer of molecules — such as gases, liquids or dissolved substances — to the surfaces of solid bodies or liquids with which they are in contact.) “Traditional treatment technologies just do not work as well as they did for the munitions of the past.”

An inexpensive, effective water purification technology could benefit the environment and the military. “Processes such as manufacturing often generate wastewater, but what if that water could be treated and reused?” said Chiu. “Army operations could save water and money and reduce risks at the same time.”

What’s more, activated carbon does not destroy munitions compounds. It adsorbs them, leaving a second source of waste, and potential liability, to deal with.

After using iron nanoparticles to destroy the munitions compounds in the wastewater, the team adds hydrogen peroxide to oxidize the residues to harmless byproducts.

This is the beauty of the technology. The same iron is used three times for three different purposes. First, the nano zero-valent iron destroys munitions compounds instantly by donating electrons and becomes di-valent iron. Di-valent iron activates hydrogen peroxide to oxidize the compounds, and in this step, di-valent iron becomes tri-valent iron. Tri-valent iron, which is commonly used in water treatment, can remove particles and residues and polish the treated wastewater for potential discharge or reuse.

“With our technology, we are actually destroying the pollution,” said Cha.

Early experimental results are promising and ongoing and will elucidate optimal conditions for field testing. Field-scale pilot testing will begin in spring 2020.

“It’s an ongoing process,” said Chiu. “As we learn more about the chemistry, we will be able to come up with better and more efficient conditions to treat this wastewater.”

The project will also include a cost analysis. “We anticipate that this process will be much cheaper than activated carbon,” said Chiu.

The team suspects that their technology could be versatile, too, with applicability for treatment of industrial wastewater from industries other than the military—such as agrichemicals and consumer product manufacturing.

The team submitted a provisional patent disclosure in 2019.