Turbidity I Wastewater treatment - How to reduce turbidity 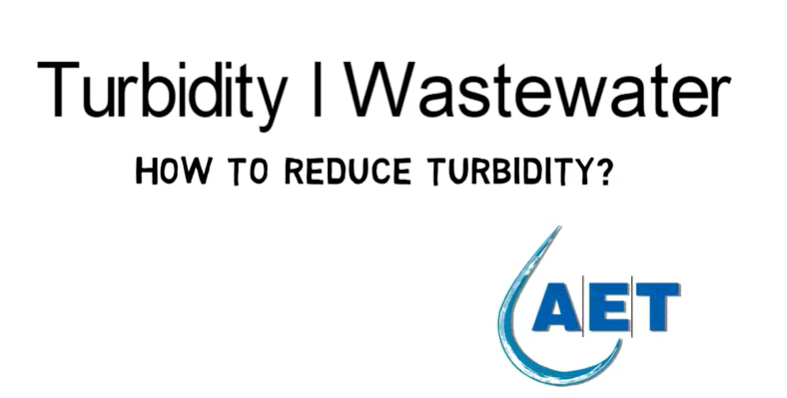 Turbidty in wastewater treatment describes the clarity or haziness of a wastewater sample. The level of cloudiness or the presence of suspended particles in the wastewater sample is usually measured in FTU. FTU stands for Formazin Turbidity Unit. Samples with less than 20 FTU are very clear whereas samples with 500FTU and more become completely opaque.

One common method to measure wastewater turbidity is called Nephelometry which uses scattered light. ISO 7027 and E-P-A 180.1 allow only infra-red 860nm or white light 500nm as light sources for the test.
When the light source hits the wastewater sample, suspended particles will reflect the incoming light. BREAK
Depending on the shape, density and size of the particles the light will be scattered in different directions. Smaller particles tend to reflect light into perpendicular direction whereas bigger particles scatter light in more directions.

Sensors around the wastewater sample can measure how much light was reflected and in which direction it was scattered. This allows to determine the sample turbidity but it also provides information on amount of total suspended solids and particle sizing.

Turbidity in wastewater is caused when small particles mix with the water stream and stay in suspension due to the motion of the water (colloids). Suspended particles in river water are for example soil, biological solids, or decaying organic matter. Suspensions are different from emulsions where two liquids are combined that usually don’t mix which each other like fat and water.

Different technologies are available to reduce turbidity in water but most commonly used is sedimentation. As the particles are relatively large they will settle down to the bottom over time as long as there is no or very little motion in the water. To prevent motion or turbulences water is therefore stored in a settling tank for several hours.
To improve the settling process further inclined plate settlers or tube settlers can be used. Inclined plate settlers or tube settlers consist of inclined settling planes which reduce the settling path and therefore the settling time of particles. Additionally, flocculation can be used to increase the sizing of particles and there settling velocity.
If particles are too small to be removed by sedimentation more complex and expensive technologies like ultra-filtration, reverse osmosis or centrifuges might be an alternative.