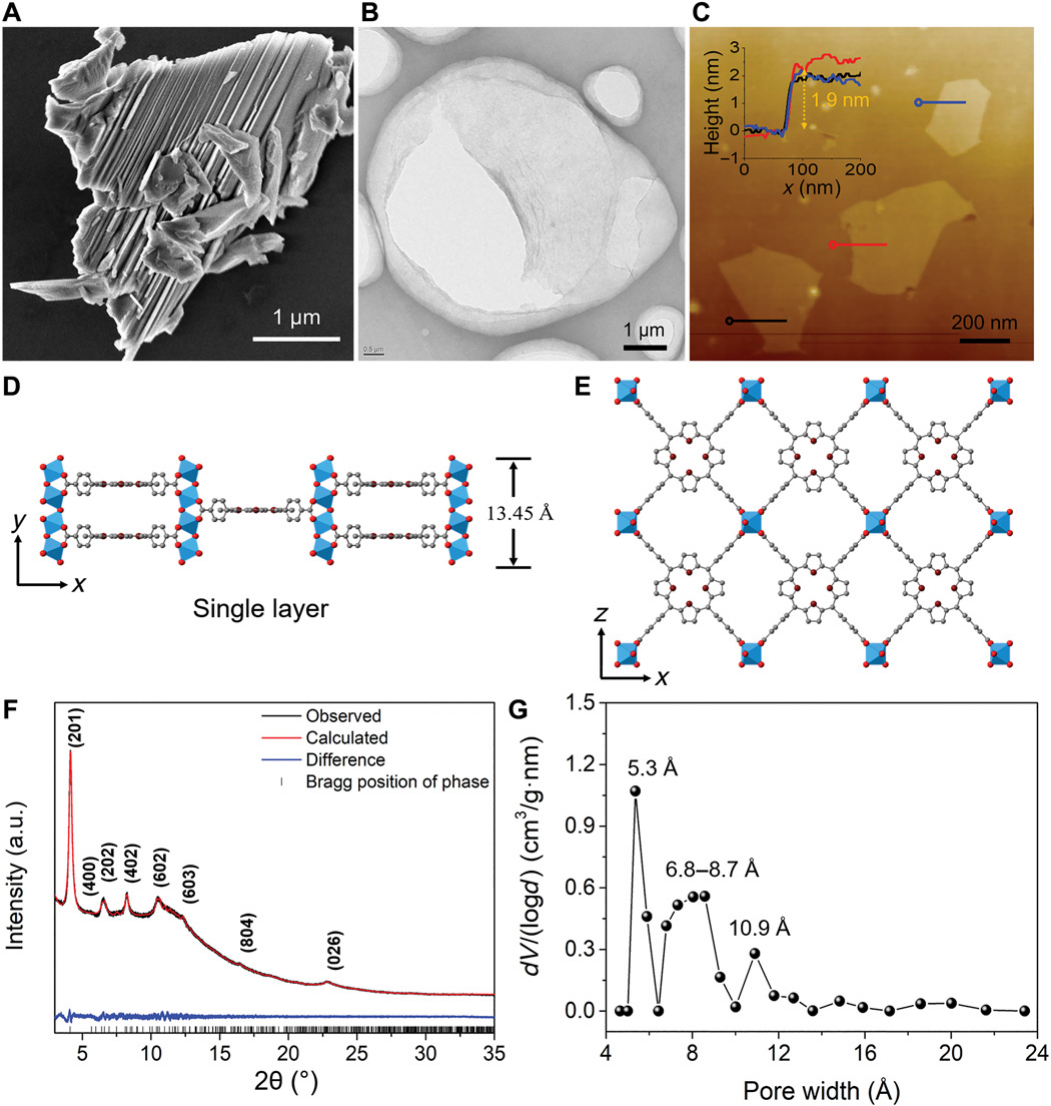 Ion separation with energy-efficient and environment-friendly membranes is essential in water environmental fields, e.g., wastewater recycling and seawater and brackish water desalination ( 1 ). Polymers are, by far, the most widespread membrane materials, largely owing to their easy processability and low cost ( 2 ). However, traditional polymeric membranes for ion separation from water are usually with a dense-selective layer, leading to the insurmountable permeability-selectivity trade-off, governed by the solution-diffusion model ( 3 ). In contrast, nanoporous membranes where nanopores act as the sieving role may overcome the limitation ( 4 ,  5 ). In this regard, recent advances in nanoporous membranes, such as porous polymers, nanotube, zeolite, and aquaporin-based membranes, have witnessed substantial progress ( 6 – 8 ). The advancements collectively recognized the potential of nanoporous membranes in enhancing ion sieving capacity if the separation channels are properly designed. Nevertheless, most nanoporous membranes are usually thick at micrometer scale and are formed by discrete channels, hampering membrane permeability ( 9 ,  10 ). Recently, two-dimensional (2D) materials, such as graphene oxide (GO), reduced GO, MoS2, etc., have recently emerged as building blocks for membrane synthesis ( 11 – 13 ). These 2D nanosheets have constructed a new class of membranes with an ultrathin thickness, in which the interlayer space between adjacent nanosheets acts as selective nanochannels for ion sieving ( 14 ). Despite the thin architecture and special transport channels of these 2D laminar membranes, there are still deficiencies in separation performance, such as high transport tortuosity and insecure/improper interlayer distance ( 15 ,  16 ).

Metal-organic frameworks (MOFs) are a scientifically compelling and evolving class of highly porous materials ( 17 ). Thus, MOFs are expected to be one of the most promising materials for separation membranes ( 18 ,  19 ). In particular, the use of 2D MOF nanosheet-based membranes for gas separation holds the promise of making a breakthrough in achieving a simultaneous increase of both permeability and selectivity ( 20 ). However, it remains a daunting challenge to fabricate ultrathin MOF membranes (less than 100 nm) for water-related processing, since most reported MOF membranes are typically thick because of 3D crystal constitution and suffer from insufficient hydrolytic stability ( 21 ,  22 ).

Here, we report the preparation of water-stable monolayer aluminum tetra-(4-carboxyphenyl)porphyrin framework (termed Al-MOF) nanosheets and demonstrate their excellence as building materials for membranes in ion separation from water. Exfoliated Al-MOF nanosheets exhibit a long-term structural robustness in aqueous environment and can form a laminar membrane via a facile vacuum filtration on porous substrates. The resulting 2D Al-MOF laminar membrane exhibits an extremely low permeability to tested ions (~3.3 × 10−6 mol m−2hour−1 bar−1) but achieves water fluxes of up to 2.2 mol m−2 hour−1 bar−1. Overall, the 2D MOF membranes outperform the most reported 2D laminar membranes on the water/ion selectivity. In addition, the interlayer distance in the Al-MOF laminar membrane is self-locked via parallel π-π interactions, leading to a steady performance for more than 750 hours.

Bulk-type Al-MOF crystals were obtained through a modified solvent-thermal method ( 23 ). The corresponding scanning electron microscopy (SEM) and atomic force microscopy (AFM) images (Fig. 1A and fig. S1, A and B) show a layered crystalline structure. Considering the weak interlayer bonding in the [0k0] direction of the bulk-type Al-MOF crystals, a facile sonication approach was used to successfully exfoliate them into 2D nanosheets (Method section and fig. S1C). Impressively, the convenient exfoliation route can reach a high nanosheet yield of approximately 90% (fig. S1D). The 2D ultrathin morphology of exfoliated Al-MOF nanosheets is revealed by transmission electron microscopy (TEM) images (Fig. 1B and fig. S2A). More than 80% of the Al-MOF nanosheets have a lateral size between 200 nm and 2 μm (fig. S2B). After the exfoliation, the Al-MOF nanosheet suspension shows an excellent dispersibility, and the colloidal solution can be reserved for more than 2 months (fig. S2C). The thickness of Al-MOF nanosheets was measured by AFM to be around 1.9 nm (Fig. 1C), which is close to the theoretical height (~1.35 nm) of a monolayer Al-MOF nanosheet (Fig. 1D).