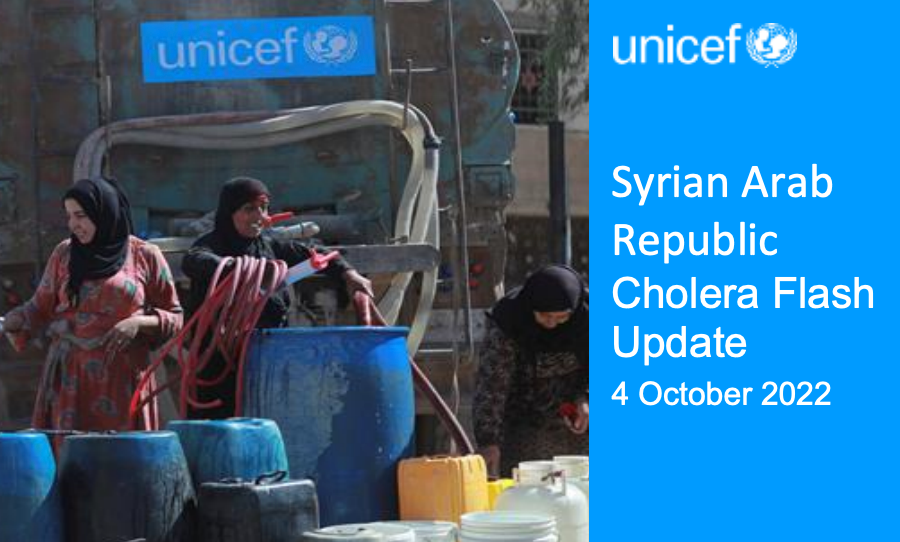 On 10 September 2022, a cholera outbreak was declared in Syria. By 30 September, surveillance data showed a total of 10,039 suspected cases reported in 13 of the 14 governorates of Syria. Approximately 22 suspected cases have been reported from overcrowded IDP camps and sites.

While the detected outbreak is currently concentrated in the four northern governorates – close to 98 per cent of cases are reported from Deir-ez-Zor, Aleppo, Ar-Raqqa and Al-Hasakeh – cholera is also rapidly spreading in other governorates, especially in light of the large and high-risk internally displaced population and Syria’s severe water crisis. With the large-scale destruction of the water and sanitation infrastructure, a result of more than a decade of conflict and ongoing economic crisis, challenging power supply and prolonged drought, across Syria, 47 per cent per cent of the population rely on alternative and often unsafe water sources to meet or complement their water needs and at least 70 per cent of the discharged sewage is untreated which present major risks for disease outbreaks, including cholera. An estimated two thirds of water treatment plants, half of pumping stations, one third of water towers, one quarter of sewage treatment plants and one sixth of wells have been damaged during the conflict. The situation in IDP camps is particularly critical. While there is a need to support an urgent emergency response to the ongoing cholera outbreak, longer term investments to restore the country’s water and sanitation system are required to prevent repeated outbreaks in the future.

To keep children and communities safe, UNICEF continues to invest in preventive measures and efforts to implement a rapid response at scale to curb the spread of the disease and limit its negative impacts. UNICEF is actively coordinating the response, including key roles in the Incident Management task force teams in Amman for WoS (Whole of Syria), and in Damascus and Gaziantep. UNICEF leads the pillars for water, sanitation, and hygiene (WASH) and risk communication and community engagement (RCCE), extensively contributes to the case management pillar and coleads the Operations, Supply, Logistic pillar.

Overall, UNICEF is working closely with WHO and other partners on the ground and seeks to reach 690,000 people with its WASH response over the coming three months. UNICEF's overall health response aims to provide critical services and respond to an estimated 161,000 cholera cases, including 40,000 expected severe cases. UNICEF’s risk RCCE interventions aim to reach 345,000 people with cholera prevention and response messages including through engaging communities on dialogue on stopping the spread of acute watery diarrhoea (AWD) in the most affected areas. Cholera response and response planning is being undertaken for all areas of Syria, including NW Syria, NE Syria and access for Ras al Ain/Tel Abiad.