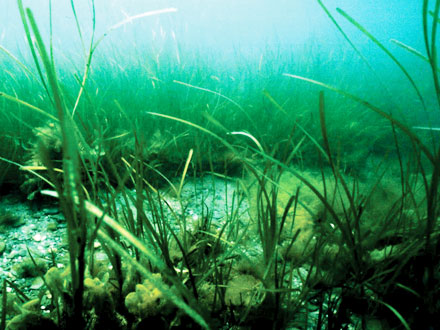 Soils all over the Earth’s surface are rigorously tested and managed. But what about soils that are down in the murky depths? Although not traditional soils, underwater soils have value and function. Some scientists are working to get them the recognition and research they deserve.

One of these scientists is Mark Stolt from the University of Rhode Island . He and his team are working to sample and map underwater soils.

“Considering that nearly half of the United States population lives within coastal counties, these soils impact many of their lives relative to commercial, recreational, and transportation activities,” he explains. “Soil maps provide a mechanism to manage these areas and make fundamental use and management decisions that affect people every day. Unlike land, you can’t put a price on underwater soils.”

Underwater soils are affected by human activities such as dredging, aquaculture, and restoration, all of which affects water quality. In dredging, layers of the underwater soil are removed to make room—for example, to allow the bottom of a ship to pass. That soil has to go somewhere. If put on land the effects can be unknown.

Aquaculture, raising aquatic plants (for example, nori) or animals (such as oysters), makes use of underwater habitats. In traditional agriculture, farmers are typically concerned about the state of their soil. However, underwater soil is poorly understood. What makes a good or bad soil for aquaculture is uncertain.

The underwater soils also face some threats from land activity, adds Stolt. For example, if too much fertilizer is put on a field it can run off into nearby bodies of water. This encourages algae growth. When that algae dies and decomposes, the water—and underwater soils—lose the oxygen fish and plants need.

Describing soils on a boat can be tricky. The crew collected two meters of this soil from a submerged cove, and is hard at work describing colors, textures, and more. White spots deep in the core on the right reveal an ancient oyster reef. Photo credit Barret Wessel.  Source: Agronomy

“These soils are the foundation and structure of a myriad of habitats and ecosystems,” Stolt says. “For example, submerged aquatic vegetation are rooted plants that derive much of their nutrients from underwater soils. They trap sediment and minimize coastal erosion. They are a huge sink for carbon dioxide that is eventually stored in the soils, and like other plants, they add oxygen. Not to mention provide habitats for the animals that live in them. Their importance goes on and on.”

By taking measures of the soils, researchers are able to add data to the National Cooperative Soil Survey maps. These provide uniform and rigorous assessments for soil and are used throughout the country. Stolt says soil scientists need to develop faster and better ways to create these maps.

Stolt and his team have been able to add new classifications of underwater soils. These classifications lay out the properties of the soil and provide information on how it was formed, and how it can be used and managed.

“There is still lots and lots to learn about underwater soils, but some of our experiences suggest these soils are quite resilient,” Stolt says. “For example, we tested whether long-term high-production oyster aquaculture (up to 20 years) would have a negative effect on the underwater soil. Although there were some negative effects, the soils essentially remained the same in this particular area.”

Taking a soil core from underwater soil is a bit trickier than soil that’s on the surface. Scientists have to utilize boats and plunge the sampling equipment through water and down into the soil. Photo credit Mark Stol t.   Source: Agronomy

Stolt and his team continue to map underwater soils to help define and understand their value.

“I am interested in the application of soils information toward solving environmental issues and problems,” he says. “I live in the Ocean State. We are surrounded by estuaries. I want to see them correctly managed and protected for everyone.”

Stolt presented his research at the International Meeting of the Soil Science Society of America, Jan. 6-9, in San Diego. Studies from this work were funded by NOAA, Rhode Island Sea Grant, NIFA, and USDA-NRCS.