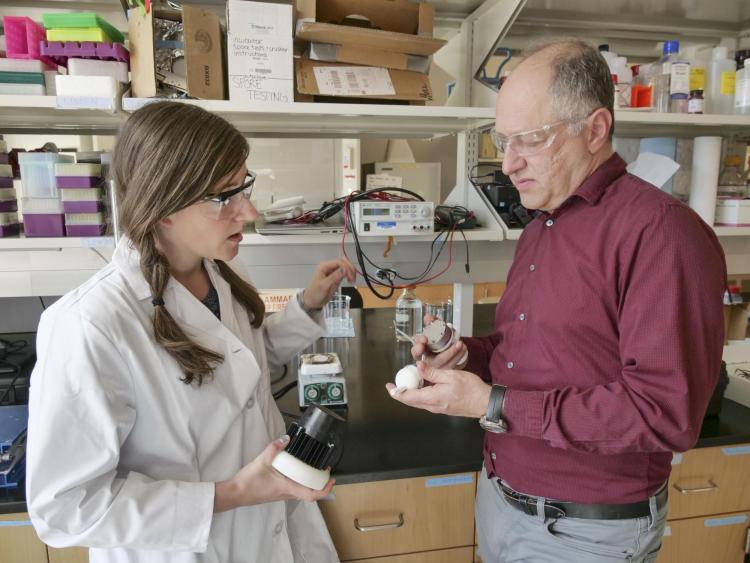 “UV has been around for decades, and is used in municipal and industrial water treatment around the world, but its potential for further innovation and application has been slowed due to the use of hazardous, bulky mercury vapor lamps,” Linden said. “But we’re interested in new UV sources with unique architectures that will allow us to advance this promising technology.”

In recent years, Linden and his colleagues have focused research on UV light emitting diodes, which are smaller (millimeters wide), nimbler and more durable. UV LEDs can be rigged in parallel, with multiple-emitting wavelength diodes to allow for a range of streamlined applications.

Another benefit: The UV LEDs are “instant-on” and don’t require any warm-up time before they start zapping contaminants, allowing users to save money by only running the devices when they need to. Water pulled from a well, for example, would be drinkable immediately after a quick UV treatment without the off-putting taste of chlorine.

Linden and his students recently completed a first-of-its-kind year-long study in Jamestown, Colorado, comparing UV LED disinfection to the town’s established chlorine treatment. They found that for a town of around 500 people without a large water plant, the UV technology provided equally effective disinfection capabilities without the added chemicals. The new technology only cost a few dollars a month in electricity and can run directly off solar power.

“Small-scale, rural systems are a natural place to start with this,” Linden said. “They have the majority of health violations because they typically don’t have engineers and dedicated water treatment staff. They might be relying on a system that’s not always operating correctly. So we feel this tech is a great solution because it can be operated remotely, autonomously and powered by solar to reduce energy draw.

In the coming years, next steps could involve integrating UV LEDs directly into infrastructure. Linden envisions faucets with the diodes built right in to the taps, activating instantly when you turn on the water. His lab group has started looking at ways to build diodes into pipes to create a system-wide network of disinfectant points, mitigating biofilm growth in high-risk settings like hospitals.

“We really feel like this technology is sustainable and poised to revolutionize this field,” Linden said. “We want to work directly with more water managers to think about these improvements, try new things and ultimate bridge the research to the practical applications.”

Nationwide, momentum around the issue is building. This fall, the U.S. Department of Energy announced the creation of the $100 million Energy-Water Desalination Hub, an interdisciplinary partnership that will focus on early-stage research and development for energy-efficient and cost-competitive water treatment. The effort will be led by the National Alliance for Water Innovation, of which CU Boulder is a founding academic partner.