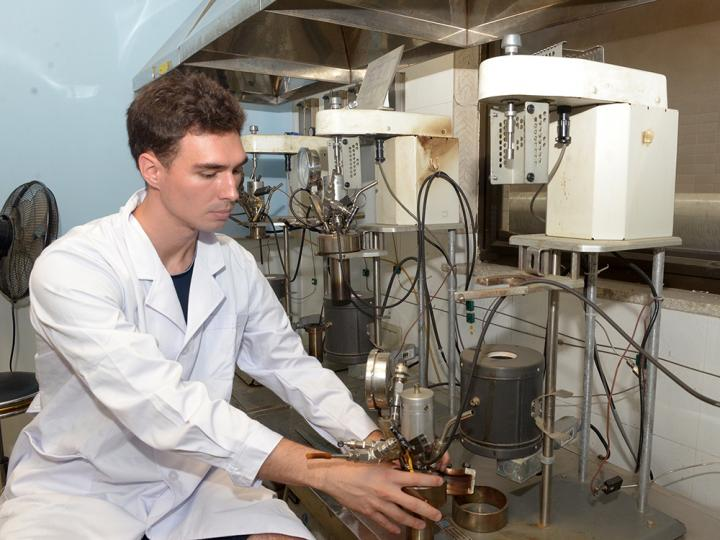 UNIVERSITY OF ILLINOIS COLLEGE OF AGRICULTURAL, CONSUMER AND ENVIRONMENTAL SCIENCES 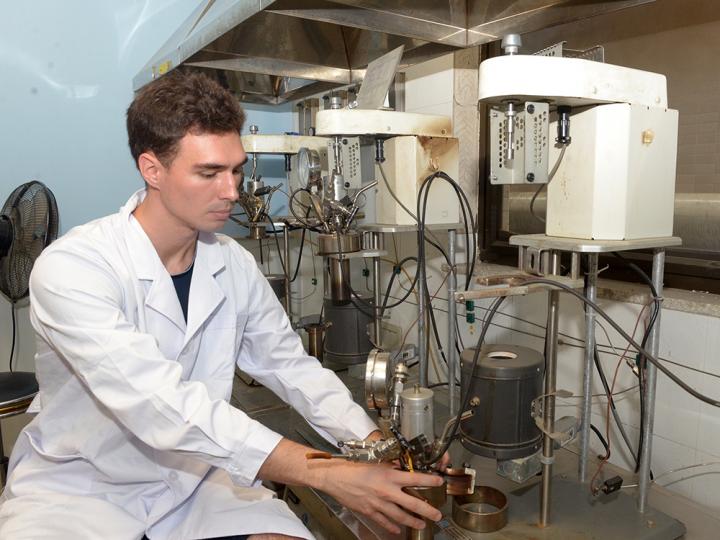 IMAGE:  JAMISON WATSON, DOCTORAL STUDENT IN AGRICULTURAL AND BIOLOGICAL ENGINEERING AT THE UNIVERSITY OF ILLINOIS, PREPARES A HYDROTHERMAL LIQUEFACTION BATCH REACTOR FOR THE CONVERSION OF ALGAE INTO BIOCRUDE OIL AND WASTEWATER. view more

URBANA, Ill. ¬- Oil produced from biomass can provide a sustainable alternative to fossil fuels. But technological challenges make it difficult to scale up production and make it economically viable.

One technology known as hydrothermal liquefaction (HTL) allows for production of biocrude oil from wet biomass such as algae, food waste, or animal manure. This process sidesteps costly drying procedures; however, it creates a wastewater byproduct that is considered an environmental hazard.

A new study from the University of Illinois discusses methods to manage this wastewater, providing a possible path to commercially viable production.

Jamison Watson, doctoral student in the Department of Agricultural and Biological Engineering at U of I, says the study provides a comprehensive overview of current wastewater treatment methods that can help producers and researchers going forward.

HTL techniques are still in the exploratory phase. But as oil becomes more expensive and more scarce, Watson predicts that will change.

"People haven't really started to address engineering challenges like upscaling to a large facility. We just think we're ahead of our time," he says.

Watson explains the study is a result of a collaboration among researchers working with different aspects of the technologies. Some of that work happens in the research lab of Yuanhui Zhang, professor of agricultural and biological engineering at Illinois. Zhang is Watson's advisor, and co-author of the paper.

"We work on producing oil from biomass such as food waste and algae through HTL. One of the byproducts of this process is the post-HTL wastewater (PHW), also called aqueous phase," Watson says. "We saw this big issue: what can we do with the wastewater? We have no way of managing it; we can't just dilute it; we can't just release it into the environment."

The study provides a detailed analysis of currently available methodologies, and it describes six different approaches to treating PHW. Those include separation of chemicals, cultivation of biomass, anaerobic fermentation, bioelectrochemical systems, hydrothermal gasification, and recycling of PHW as a solvent or reactant for HTL.

Some of the potential applications created through these approaches include extraction of chemicals and gases, production of electricity or hydrogen, or purifying the liquid so it is clean enough to water crops or even use as drinking water, Watson says.

For each of the six methods, Watson and his collaborators describe the technology, discuss the benefits and challenges, and assess future potential, as well as feasibility of upscaling to commercial application.

"We want to learn which technologies show the most promise," Watson says. "So when this thermochemical technology really hits its stride in the next 10 to 20 years, people will have an idea of how we can valorize the wastewater byproduct to highlight the potential of this oil production technology."

Hydrothermal liquefaction (HTL) is a thermochemical conversion technology that shows promising commercial potential for the production of biocrude oil from wet biomass. However, the inevitable production of the hydrothermal liquefaction aqueous phase (HTL-AP) acts as a double-edged sword: it is considered a waste stream that without additional treatment clouds the future scale-up prospects of HTL technology; on the other hand, it also offers potential as an untapped nutrient and energy resource that could be valorized. As more researchers turn to liquefaction as a means of producing renewable fuel, there is a growing need to better understand HTL-AP from a variety of vantage points. Specifically, the HTL-AP chemical composition, conversion pathways, energy valorization potential, and the interconnection of HTL-AP conversion with biofuel production technology are particularly worthy of investigation. This paper extensively reviews the impact of HTL conditions and the feedstock composition on the energy and elemental distribution of process outputs with specific emphasis on the HTL-AP. Moreover, this paper also compares and contrasts the current state of value-added products separation along with biological (biomass cultivation, anaerobic fermentation, and bioelectrochemical systems) and thermochemical (gasification and HTL) pathways to valorize HTL-AP. Furthermore, life cycle analysis (LCA) and techno-economic assessments (TEA) are performed to appraise the environmental sustainability and economic implications of these different valorization techniques. Finally, perspectives and challenges are presented and the integration approaches of HTL-AP valorization pathways with HTL and biorefining are explored.