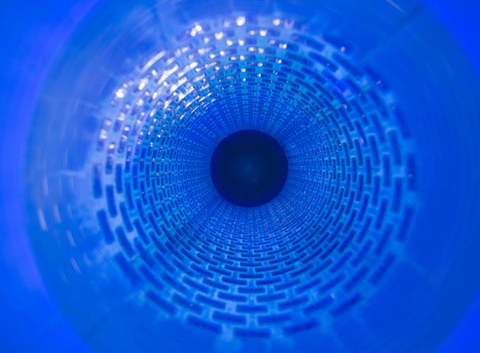 UV lamp sterilization using mercury has been used in water purification facilities for the past several decades, and despite the restrictions on mercury products by the Minamata Convention, it was difficult to replace the sterilization performance, so it was subject to special permission. However, Violeds uses LEDs as a UV source, so it does not use mercury and reduces the amount of chemicals used for sterilization, thereby reducing the occurrence of environmental problems. In addition, an energy-efficient operation is possible through easy automatic control according to water usage thereby reducing operating costs compared to facilities using existing UV lamps. In particular, the expected effect is large in facilities such as water purification plants that need to be operated for a long time.

Typhon's BIO-310 UV LED Reactor, installed in the Cumbria water purification plant in the UK with Violeds applied, has an optimal design for the arrangement and operation of UV LEDs, and can process 30,000 cubic meters of water per day. BIO-310 was selected as a winner in the water supply field at Aquatech Amsterdam 2021, the largest water treatment exhibition in Europe and the most influential one in the world.

According to a Typhon official, the UV application market is around USD 950 million out of the USD 400 billion water treatment market per year. UV technology can protect water from Cryptosporidium, which is difficult to sterilize with chlorine, so it is expected to be expanded to water purification plants around the world in the coming few years when the improvements in efficiency of the UV LEDs and cost decrease will make even more attractive the return on investment. Within the next 2 years, we see the tipping point where LED power/efficiency development changes the scenario from ‘Why use LED’ to ‘Why not use LED’.

Oliver Schafer, EVP Seoul Viosys & Seoul Semiconductor Sales Division, underlines: “In order to prevent water quality accidents due to occurrence of algae and larvae in tap water every year, our proprietary Violeds technology provides fundamental advantages compared to legacy mercury lamp usage and the resulting environmental damage effects. Our research team is spurring R&D of Violeds technology so that you can trust and drink it in an environmentally friendly way.”

In 2013, Typhon’s founders, Dr. Matthew Simpson and Peter McNulty were working together on an off-grid municipal scale water project in Nigeria. The need for a sustainable and simplistic solution inspired them to investigate the possibility of using Mercury Free high flow LED ultraviolet (UV) water treatment equipment. None existed, and no existing UV water treatment equipment supplier would build one for them. In 2014, Typhon Treatment Systems was formed to create it. We now deliver a UV LED solution that is 100% mercury-free, reduces maintenance, and dramatically reduces ancillary infrastructure (Glass/Mercury traps).

At this time we focus on two main applications leveraging UVC LEDs: