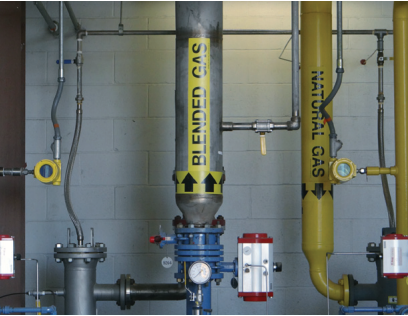 The Rahway Valley Sewerage Authority (RVSA), which operates a large wastewater treatment plant in New Jersey, embarked on a green co-generation waste-to-energy project to power a portion of its operations. The plant performs primary, secondary, tertiary and sludge treatment processes in serving over 250,000 residential customers and 3000 industrial and commercial customers in a 40-plus square mile region. A maximum peak flow of 105 million-gallons-per-day (MGD) can be processed daily.

The RVSA’s management team became interested in pursuing the gas-to-energy power co-generation system for both environmental and cost reasons. This progressive treatment facility installed four large 1.5 MW cogeneration power production engines, which would be fueled in part by the site’s production of digester gas and generate on-site power for the facility. These large gas reciprocating engines are well suited to co-gen waste-to-energy power applications.

They have generally high electrical efficiency rates with relatively low environmental impact. A number of manufacturers design gas reciprocating engines especially for use in wastewater treatment and landfill plants. By providing energy directly from the load source for use in the plant, there is very little energy loss due to transportation and distribution. To sustain the BTU levels required by the engines in the event that digester gas production was too low, the engines also were to be powered by natural gas.

The blended waste gas and natural gas system was necessary because the plant didn’t always produce enough waste gas to operate at least two of the four co-gen engines at 70 percent of the load needed for plant operations. The co-gen energy was in part designated to help power a new ultraviolet (UV) disinfection system. This system was installed to help meet environmental regulations requiring effluent treatment before the water was to be discharged from the plant. UV disinfection systems require continuous power in order to disinfect wastewater effectively during the treatment cycle.

UV disinfection utilizes short wavelength UV-C ultraviolet light to kill microorganisms in wastewater effluent prior to discharge back into the water system. It attacks bacteria, viruses, molds and other pathogens. It is frequently used in conjunction with other disinfection technologies to ensure effectiveness. UV lamps for water treatment are typically mercury-vapor lamps that produce UV radiation at 200 to 254 nm, depending on the type of lamp. The lamps never touch the water, but are instead housed in glass sleeves inside the water chamber or mounted externally. As water flows through the chamber, the water is exposed to the UV rays that are absorbed by the suspended solids in the flow stream.