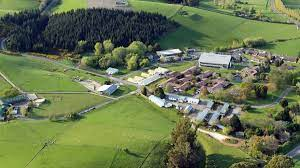 It is a data stream with a difference.

For the past two years, Dr Muirhead has been working on a project to get sensors to measure the levels of nitrogen, sediment, E.coli and phosphorus in waterways.

Two sensor systems had been installed in waterways on the research farm, which runs mostly deer, near Mosgiel.

The aim was to get the sensor technology to send a stable stream of data to cloud storage so it could viewed on a data dashboard by a user, such as a farmer wanting a better understanding of any effect a certain farming practice was having on a waterway.

The project was part of the $5million New Zealand Bioeconomy in the Digital Age programme, designed to harness the power of digital technologies to enable the transformation of food systems in New Zealand.

Another project in the programme focuses on virtual fencing technology.

AgResearch had been trialling the virtual fencing on Landcorp farm Waipori Station, which surrounds Lake Mahinerangi.

For the trial, half a herd of Angus cattle were equipped with solar-powered collars, which track location through GPS.

Farmers can draw sensitive areas on a virtual map where they did not want the cattle to go, such as waterways.

When the animals move near the forbidden zones, they were dissuaded with a buzzing noise, which gradually became louder.

If this did not work, the animal received a single electric pulse to the back of its neck.

The hope was to have approval to install sensors in a waterway on the station by Christmas, to run simultaneously with the virtual fencing project.

The sensor project would verify if the virtual fencing was improving water quality, as hoped.

The two technologies could be used to show the effect on a waterway if livestock were allowed access to it for a short time to drink.

The data could be valuable for farmers, as it was expensive to fence waterways in remote high country stations and provide an alternative water supply for livestock.

Price was a major consideration when choosing water sensor technology so farmers could afford to install it.

A challenge for the project was a lack of cellphone coverage in some areas, as it was the cheapest option for transmitting the data to the cloud.

The traditional method of collecting water quality data was manually by regional councils, typically once a month, to identify long-term trends for decision-making.

If the new technology allowed water quality to be measured much more frequently, better decisions could be made.

Dr Muirhead spoke about his project at a future farming expo in Otautau in June, the event was run by the Aparima Community Environment, an umbrella organisation of six catchment groups, Lower Aparima, Mid Aparima, Orepuki, Pourakino, Upper Aparima and Waimatuku.

About 200 farmers attended the expo and many were keen to use the technology to improve water quality.