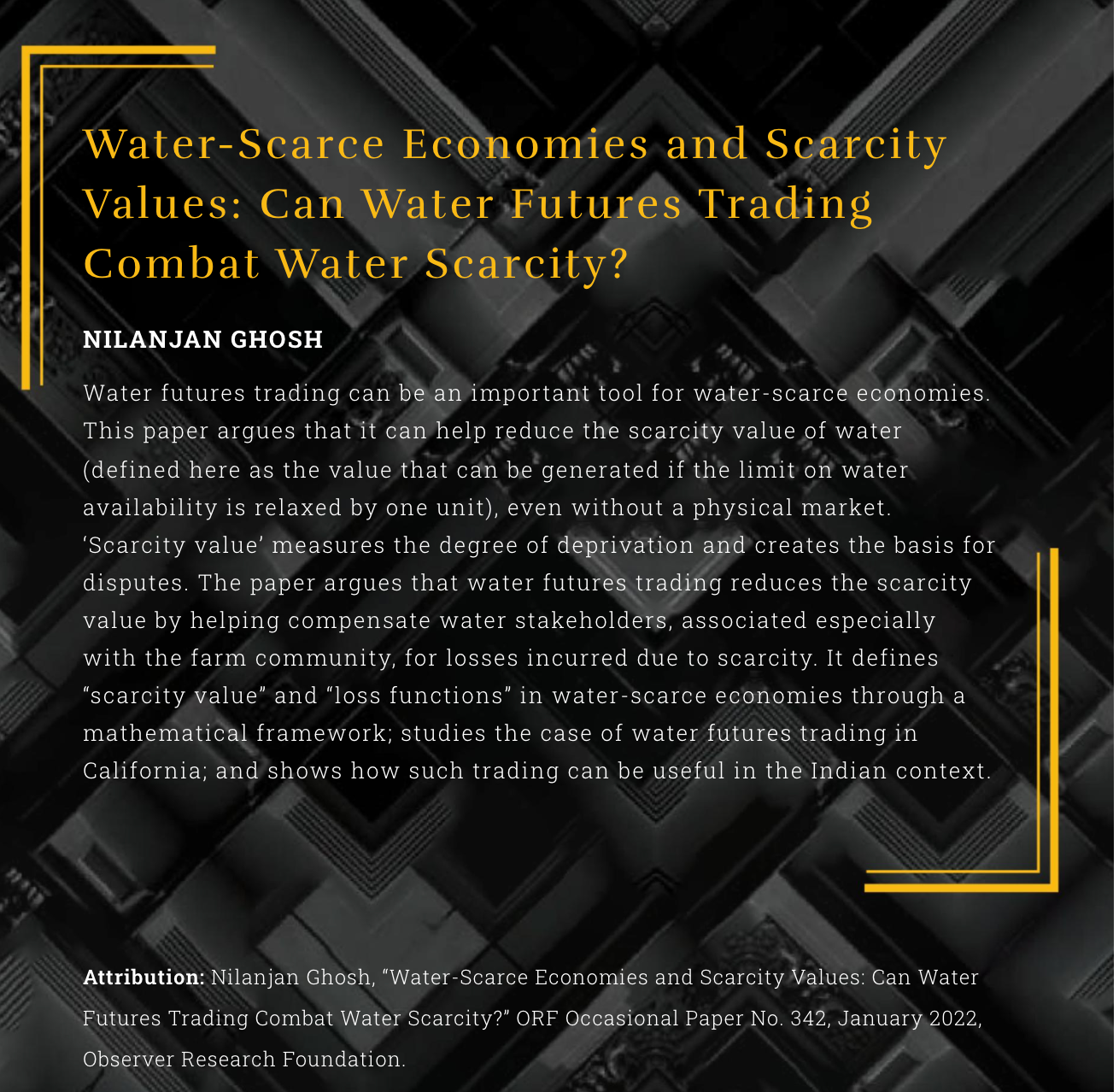 1. Introduction
Global water scarcity is on the rise, and approximately two-thirds of the world’s population experience severe shortage at least once a year; by 2050, estimates say, nearly six billion people will suffer from clean-water scarcity.[1] The challenges are in both supply and demand: natural flows are reduced during dry months in many parts of the world, due to extensive supply-side engineering interventions that have fragmented river systems; pollution levels in water have increased due to anthropogenic activities, including industrial effluents and unsustainable agriculture; and rapid population and economic growth have increased the demand for water. Water use has grown at more than twice the rate of the human population over the last century, especially due to resource-intensive agriculture in the developing and underdeveloped world, with the sector now accounting for 70 percent of global freshwater use.[2] The forces of global warming and climate change, too, have exacerbated the global water crisis by causing a shift in ecohydrological cycles, resulting in spatial and temporal variabilities in precipitation and temperatures.

The Malthusian creed associates conflicts over natural resources with their relative or absolute scarcity.[3] The Food and Agriculture Organization (FAO) classifies water scarcity into two classes: physical water scarcity and economic water scarcity.[4] The former is the lack of physical availability of water to meet various demands, while the latter is generally a characteristic of arid regions. Additionally, overallocation and overdevelopment for supply augmentation through structural engineering can fragment water systems and create artificial scarcity in semi-arid or non-arid regions as well.[5] Physical water scarcity manifests as severe environmental degradation and increasing occurrence of conflicts, and it arises primarily due to either a shortage in the quantity of usable water (i.e. drinking water and water used for other purposes) or an extreme spatial disparity in water distribution—i.e. certain regions endowed with greater amounts of water (e.g. western Europe, US east) than other regions (e.g. sub-Saharan Africa). In a temporal context, there are three additional notions of scarcity, the first of which is related to annual fluctuations in water availability where the physical availability of water in a particular region diminishes during seasons of low precipitation. The second notion is concerned with population growth, where enhanced economic activities lead to diminishing per capita availability of water over time. This situation is exacerbated by rapid urbanisation and industrialisation. Thus, the demand for water is likely to increase further in the near future, intensifying the existing problems. The third is related to climate change, which can cause problems by shifting the precipitation regime.

Economic water scarcity, meanwhile, is a result of lack of access to water rather than diminished physical availability. This is often due to a lack of investment in water infrastructure or inadequate infrastructure development, resulting in economic agents being deprived of water for economic use (e.g. agriculture, industry, households); high susceptibility to seasonal, annual and long-term fluctuations to the physical availability of water; and inequitable distribution of water even when infrastructure exists.[6]

In contrast to the Malthusian creed of scarcity propounded by the FAO, the paradigm of Integrated Water Resources Management (IWRM) recognises the ecosystem as a critical stakeholder in the water-demand matrix. To combat economic and physical scarcities, the erection of supply augmentative structures (e.g. dams, barrages, diversion channels) emerged as the dominant paradigm, with more water diverted to the water-scarce zones from the water-rich zones, through interventions in the natural hydrological flows.[7],[8] However, despite the initial short-term successes, over time, it became evident that the new and emerging challenges of the future could not be resolved by addressing scarcity alone. A strategy focused exclusively on increasing interventions into the hydrological cycle came to be regarded as counter-productive because of the adverse impacts on the basin ecosystem. Consequently, policy documents as well as actions in the developed world, began to focus on holistic approaches to managing water and governing river basins, triggered in particular by ecological concerns.[9]

Successive dam decommissioning is testimony to this shift in paradigm, which renders higher priority to projects that meet basic and unmet human and ecosystem needs for water.[10] Thus, in the IWRM paradigm, the conflict between economic demands and ecosystem demands for water are duly acknowledged. In that sense, “scarcity” is not merely a human economic issue but can be a characteristic of the ecological sector, especially when supply-augmentation plans for meeting unbridled human demands can fragment river systems; impact the integrity of the basin ecosystem; and cause irreparable ecosystem destruction, affecting the provision of ecosystem services in the long run.

The biggest withdrawals of water from the natural ecosystem occur in the agriculture sector, primarily for irrigation. According to the World Bank, while agriculture accounts for an estimated 70 percent of total freshwater withdrawals globally, water withdrawals in the arid and the semi-arid regions account for more than 90 percent of total consumption.[11] In many cases, therefore, water conflicts are not always a function of the physical scarcity of water but are a temporal coincidence of demand, based on the scarcity value of the resource.[12] A mathematical model by Ghosh and Bandyopadhyay[13] reproduced in this paper delineates the scarcity value of water as the marginal value loss due to the scarcity of water. The magnitude of the loss is a metric of the degree of deprivation and creates the basis for water conflicts.

The rest of the paper presents the theoretical setting through a static mathematical framework of scarcity value of water, and the loss function associated with scarcity; discusses the benefits of water futures trading; explores how the NASDAQ Veles California Water Index futures contract can help the farm community amidst a long-running drought; and outlines the problems specific to India and how water futures trading can help address the increasing water-availability risks.