Water where you need it - MIT Technology review 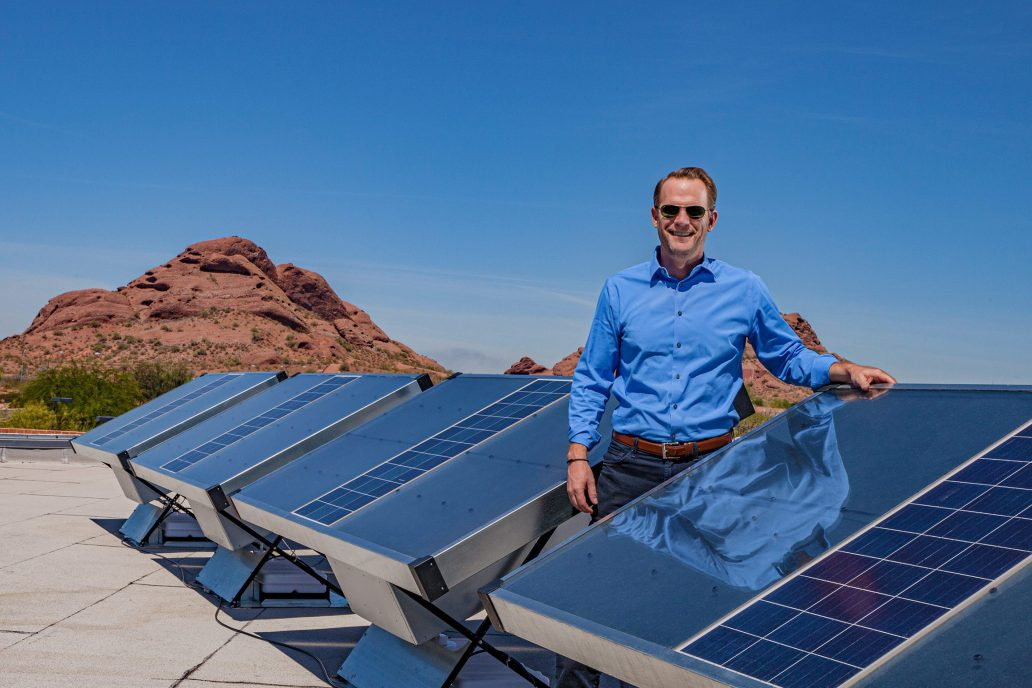 Cody Friesen, PhD ’04, invented panels that harvest water from the air—even in arid Arizona. And that’s after he’d figured out how to make rechargeable high-energy batteries that are cheap and eco-friendly.

In 2018, Cody Friesen, PhD ’04, trekked through the bush in Kenya’s Rift Valley to comprehend the perils the girls of the Samburu Girls Foundation faced when they went out to gather water.

Every day, girls living at the rescue organization had to walk two miles—often past men who see them as property—to the nearest water in a land where the past decade had been marked by blistering droughts.

There, on the muddy banks of a river riddled with cholera, Friesen saw the tracks of hyenas and men, reminders of what might await any girl who lingered.

The scene also stood as a reminder that an estimated 2.2 billion people worldwide lack safe drinking water, including these vulnerable Kenyan girls 200 miles north of Nairobi.

Friesen eliminated that daily trek to the river by installing an array of 40 devices resembling solar panels on the foundation’s grounds. He designed the device, which he calls the Source Hydropanel, to pull water out of air, powered only by solar energy. It solved the water safety crisis at the Kenyan girls’ refuge—and Friesen says his device can do the same for people around the globe who lack access to clean drinking water. 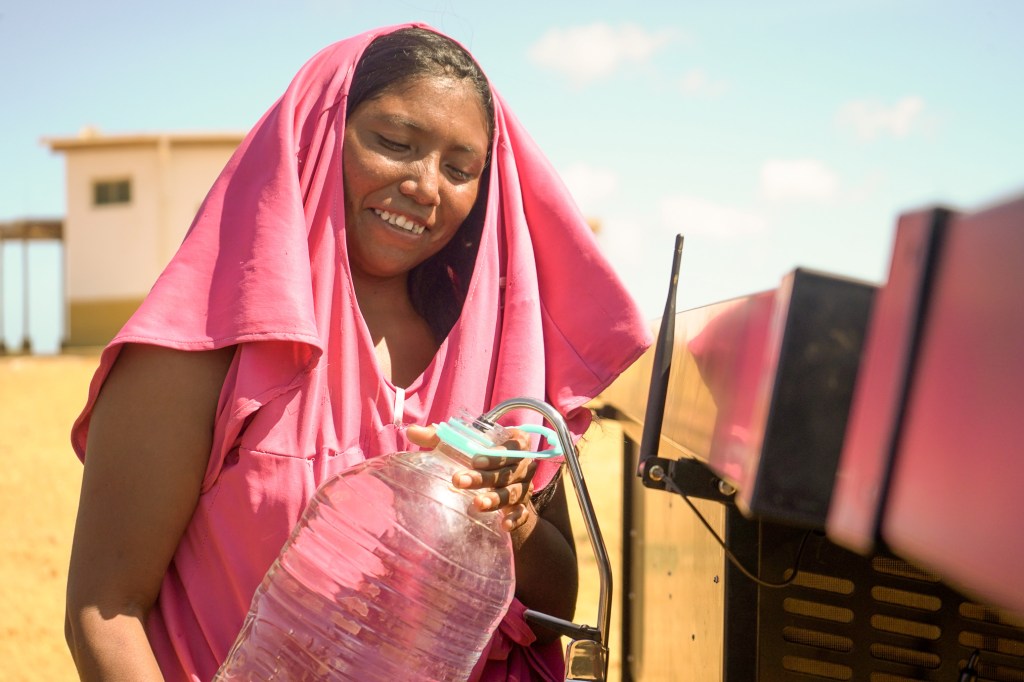 Residents of Bahia Hondita on the La Guajira peninsula in Colombia now get water from an array of Source hydropanels instead of relying on brackish water from a local borehole.

Friesen first got interested in water growing up in what were then relatively rural suburbs southeast of Phoenix. “As a kid hiking in the desert, we were always hiking to a body of water like a creek or a spring,” he says. “From an early age, appreciating the importance and significance of water was just a part of my life.”  He’d also always been curious about how things worked, the kind of kid who tore apart the new toy car on Christmas morning and had it reassembled by lunchtime. So as a teen  chancing upon stands of cottonwoods and natural springs on hikes, he’d not only ponder the value of water but also think about the infrastructure that got it from the Colorado River to metro Phoenix. He figured there was a better alternative to the existing solution: damming one of North America’s mightiest rivers and pumping its water hundreds of miles.

When he started at Arizona State University as an undergraduate, he gravitated to materials science, which he calls a “trifecta of physics, chemistry, and mechanical engineering.” His doctoral research at MIT focused on the properties of thin metallic films and the quantum mechanics of catalysis related to fuel cells. Upon earning his PhD in 2004, he returned to ASU, joining the materials science faculty at the Ira A. Fulton Schools of Engineering.

In his new lab at ASU, he turned his attention to building a better battery. Within three years, Friesen had created a rechargeable zinc-air battery and founded a startup called Fluidic Energy to commercialize it. He followed that with his water-from-air hydropanel and in 2014 launched his second venture, Zero Mass Water, to refine, manufacture, and distribute it.

Friesen describes similar origins and paths of discovery for each. In both cases, he started by trying to understand and then reframe big-picture problems. He then looked for ways to address them using materials that were best suited to the particular chemical and physical challenges at issue. It’s an approach he says was instilled at MIT, where people focus on tough challenges and “are constantly thinking about how to hack together new solutions,” he says.

The zinc-air battery had its genesis when Friesen looked at the periodic table and asked what the cheapest possible battery would be. That led him to think about oxygen in the air as the cathode and zinc metal as the anode. Zinc-air batteries had been around for about 100 years, but nobody knew how to recharge them. They discharge the energy stored in the zinc by exposing it to the air’s oxygen, creating zinc oxide and releasing electrons. But recharging the battery causes spiky crystals, or dendrites, of zinc to build up on the surface of the anode, making it impossible to recharge it more than a few times. To get around the dendrite problem, Friesen created a layered nickel scaffold with an array of holes in various sizes; the layers are characterized by different electrical properties. Zinc is plated to the scaffold, which then functions as a porous anode, and a mix of potassium hydroxide and liquid-based ionic additives serves as an electrolyte. When the electrolyte passes through the anode during charging and discharging, this mixture works with the pores and the layered structure to prevent dendrites from forming and building up. As a result, the batteries can be recharged repeatedly and are designed to last more than 10 years.

The device ticked all the boxes. It was built with cheap, nontoxic, and abundantly available raw materials. And it could store more energy than a lithium-ion battery at a much lower cost—potentially for as little as $10 per kilowatt-hour at scale.

Friesen’s batteries could maintain power for 12 hours or more during extended blackouts. In areas without access to the grid, they could be charged by solar panels and used to provide power. The invention prompted MIT Technology Review to include him on the 2009 TR35 list recognizing outstanding innovators under 35.

In 2018, Fluidic Energy was bought by surgeon and medical entrepreneur Patrick Soon-Shiong and became NantEnergy. The company says it has supplied power to 200,000 people in rural Africa and cites a demonstration project in Madagascar, where three-quarters of the population has no electricity. Although it laid off half its workforce last fall, NantEnergy reported installing 3,000 systems in nine countries last year and says that all told, it has provided backup power during more than a million hours ofextended blackouts.

As the zinc-air battery was moving from lab to market, Friesen was already working on his next big challenge. Since 2010 he had wanted to develop a device that could produce clean water where it’s needed—and use only freely available resources and renewable energy to do so.

He realized that there is lots of moisture in the air. The challenge was how to extract and deliver it efficiently. By 2014, Friesen was fine-tuning a working prototype in his ASU lab in Tempe.

Today, the Source hydropanel looks like a thick solar panel measuring eight feet by four feet by five inches atop a base with a reservoir; all told it’s about three feet tall and weighs about 300 pounds. The device uses solar-powered fans to draw air inside, where water vapor is adsorbed onto a proprietary hygroscopic material—a desiccant that Friesen engineered at the nanoscale to maximize its ability to attract water without compromising its ability to release the water that collects on its surface. Heat captured by the device’s solar thermal panels increases the vapor pressure of the water, causing the hygroscopic material to release it. This raises the specific humidity of the water vapor inside the device, elevating the dew point above the ambient temperature so there’s no need to chill the vapor to get it to condense—even in arid environments. Friesen calls this process “passive condensation.” From there, the water pools in a 30-liter tank at the base of the device. New water is repeatedly drawn into and released from the hygroscopic materials many times per day.

The hygroscopic material effectively attracts only water molecules, so the combined processes of adsorption and passive condensation consistently deliver water of high purity. In theory, even water harvested from polluted air is pure, says Friesen, who adds that all the company’s measurements to date confirm that. The water in the tank is regularly treated with ozone to prevent the growth of microbes, and before it reaches a dispenser, it passes through calcium and magnesium cartridges to improve its taste.

Solar-powered sensors help optimize the hydropanel’s performance by measuring the ambient air temperature, solar intensity, and relative humidity, feeding that data into an algorithm that dynamically controls the rate at which fans draw air into the device. Solar-powered wireless transmitters also send live data to a cloud database, making it possible for Zero Mass Water to monitor all installed panels. The company’s network operations center can usually resolve functional issues with over-the-air commands and programming; if a maintenance issue is detected, the center can loop in local partners to address it.