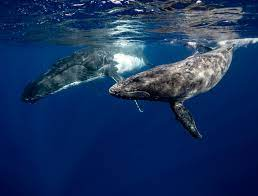 Filter-feeding whales are consuming millions of particles of microplastic pollution a day, according to a study, making them the largest consumers of plastic waste on the planet.

The central estimate for blue whales was 10m pieces a day, meaning more than 1bn pieces could be ingested over a three- to four-month feeding season. The weight of plastic consumed over the season was estimated at between 230kg and 4 tonnes.

In highly polluted areas, or if plastic pollution continues to rise in the future, the whales could be eating 150m pieces a day, the researchers warned. The data was collected in the coastal waters of California, but the scientists said other parts of the world were more polluted.

The research is the first to estimate microplastic consumption for blue, fin and humpback whales, which are baleen whales and use filters to catch their prey. It found that virtually all the microplastics consumed are in the krill and fish the whales eat, rather than in the water. The plastic particles are similar in size to the food the smaller organisms eat.

The whales could be harmed by the microplastics and the toxic chemicals they carry, and previous work has found plastic-derived contaminants have been identified in their blubber. The mammals are still recovering from the whaling trade and face other human-caused impacts such as noise and ship strikes.

“What we found was surprising – really high numbers of daily plastic ingestion,” said Dr Shirel Kahane-Rapport, at California State University, Fullerton, who led the study. “We imagine that it will have some sort of impact but we don’t know the exact health effects. This is the first step to figuring that out.”

There are far more polluted ocean basins in the world than the coast of California, Kahane-Rapport said, including the North Sea, the Mediterranean and waters in south-east Asia. “Whales feeding in those areas certainly might be at greater risk than off the coast here in the western US,” said Dr Matthew Savoca, at Stanford University, who was part of the team that conducted the study.

“It’s a sad story about whales, but also it’s a story about us,” Savoca said, as human diets are also affected. “Whether it’s cod or salmon or other fish, they are eating those same fish that the humpback whales are eating.”

Huge amounts of plastic waste are dumped in the environment and microplastics have polluted the entire planet, from the summit of Mount Everest to the deepest oceans. At least 1,500 wild species have been reported to ingest plastic. People consume the tiny particles via food and water as well as breathing them in. Microplastics were revealed to be present in human blood in March.

The research, published in the journal Nature Communications, combines a series of measurements to estimate the whales’ microplastic consumption. Tags on 191 blue, fin and humpback whales recorded more than 36,000 feeding lunges by the whales and airborne drones were used to measure how much water each lunge captured.

The density of the prey in the water was evaluated using acoustic devices and the microplastic in the prey was estimated using previous research and measurements of plastic pollution in the water column. The scientists found baleen whales mainly fed at depths of 50–250 metres, which is also where the most microplastics are found.

Humpback whales, which are smaller than blue whales, were estimated to swallow up to 4m microplastics a day when feeding on krill and 200,000 particles when feeding on fish, such as anchovies.

The researchers think their estimates are conservative, as plastic pollution will have increased since the data was collected and they made conservative estimates of how much plastic the prey species of krill and fish consume.