Will Florida be lost forever to the climate crisis? 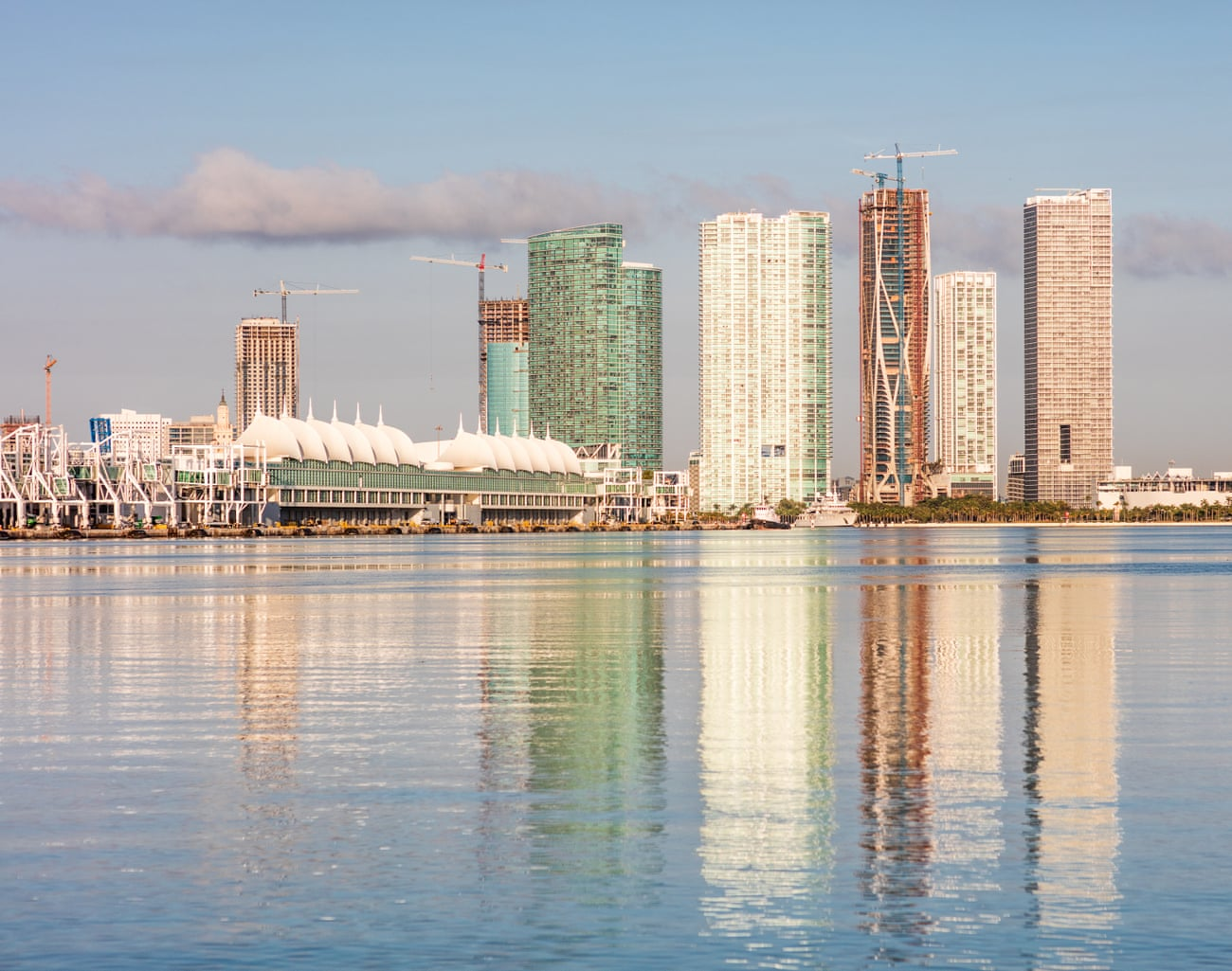 From sea level rise to habitat loss, the effects of the climate crisis are on the verge of making south Florida uninhabitable 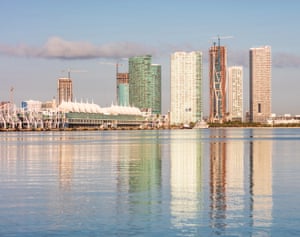 View of Miami from the water. Photograph: Anastasia Samoylova

Few places on the planet are more at risk from the climate crisis than south Florida, where more than 8 million residents are affected by the convergence of almost every modern environmental challenge – from rising seas to contaminated drinking water, more frequent and powerful hurricanes, coastal erosion, flooding and vanishing wildlife and habitat.

If scientists are right, the lower third of the state will be underwater by the end of the century. Yet despite this grim outlook, scientists, politicians, environment groups and others are tackling the challenges head on.

Below are some of the biggest threats posed by the climate crisis to south Florida today, along with solutions under consideration. Some of these solutions will have a lasting impact on the fight. Others, in many cases, are only delaying the inevitable. But in every situation, doing something is preferable to doing nothing at all.

The threat:  By any estimation, Florida is drowning. In some scenarios, sea levels will rise up to 31in by 2060, a devastating prediction for a region that already deals regularly with tidal flooding and where an estimated 120,000 properties on or near the water are at risk. The pace of the rise is also hastening, scientists say – it took 31 years for the waters around Miami to rise by six inches, while the next six inches will take only 15 more. At such a rate, many of Miami Beach’s landmarks, the world famous South Beach, and the picturesque art deco hotels of Ocean Drive, will be lost within three decades, according to some studies. 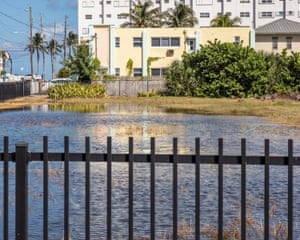 Possible solutions:  Dozens of municipalities, the four counties of south-east Florida, and partner groups such as the Nature Conservancy have combined their efforts through the south-east regional action climate plan to tackle the crisis. In Miami Beach, dubbed the “ground zero” of sea rise, a multifaceted and costly Rising Above program is already under way. It includes elevating roads, building new sea walls and installing new and higher capacity pumps and drainage systems to alleviate flooding. In the Florida Keys, the approach will probably tilt more towards managed retreat: abandoning areas too expensive to maintain and focusing on measures with a better cost-benefit ratio. Parts of the Keys are going to simply disappear, some within two decades.

The cost : The participating counties and municipalities are contributing to a $4bn statewide spend, including Miami Beach’s $400m Forever Bond, a $1bn stormwater plan and $250m of improvements to Broward county’s sewage systems to protect against flooding and seawater seepage. In the Keys, many consider the estimated $60m a mile cost of raising roads too expensive.

The threat:  Saltwater from sea level rise is seeping further inland through Florida’s porous limestone bedrock and contaminating underground freshwater supplies, notably in the Biscayne aquifer, the 4,000-sq mile shallow limestone basin that provides drinking water to millions in southern Florida. Years of over-pumping and toxic runoff from farming and the sugar industry in central Florida and the Everglades have worsened the situation. The Florida department of environmental protection warned in March that “existing sources of water will not adequately meet the reasonable beneficial needs for the next 20 years”. A rising water table, meanwhile, has exacerbated problems with south Florida’s ageing sewage systems. Since December, millions of gallons of toxic, raw sewage have spilled on to Fort Lauderdale’s streets from a series of pipe failures. 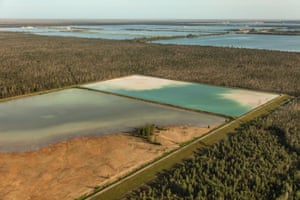 The Biscayne aquifer square lake between the Everglades and Miami. Photograph: Anastasia Samoylova

Possible solutions:  A comprehensive 30-year Everglades restoration plan was authorized by Congress in 2000 to “restore, preserve and protect” the south Florida ecosystem by improving water flows to help flush the salinity, and a 78bn-gallon Everglades agricultural area reservoir (EAA), a key component of the congressional plan, is earmarked for land once leased by big sugar. The restoration plan, however, has stalled amid funding wrangles, and the storage reservoir plan delayed several times.

The cost:  The Everglades restoration plan was originally priced at $7.8bn, rose to $10.5bn, and has since ballooned to $16.4bn. Donald Trump’s proposed 2021 federal budget includes $250m for Everglades restoration. The estimated $1.8bn cost of the reservoir will be split between federal and state budgets.

The threat:  Florida’s native flora and fauna are being devastated by climate change, with the Florida Natural Areas Inventory warning that a quarter of the 1,200 species it tracks is set to lose more than half their existing habitat, and the state’s beloved manatees and Key deer are at risk of extinction. Warmer and more acidic seas reduce other species’ food stocks and exacerbate the deadly red-tide algal blooms that have killed incalculable numbers of fish, turtles, dolphins and other marine life. Bleaching and stony coral tissue disease linked to the climate crisis threaten to hasten the demise of the Great Florida Reef, the only living coral reef in the continental US. Encroaching saltwater has turned Big Pine Key, a crucial deer habitat, into a ghost forest. 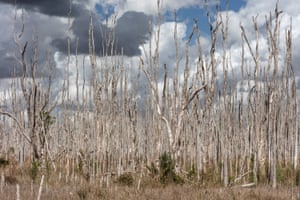 A ghost forest by the Everglades. Photograph: Anastasia Samoylova

Possible solutions:  The diverse range of challenges requires a piecemeal approach. A state and federally funded “Noah’s ark” is collecting and preserving coral chunks at venues including Nova Southeastern University as disease research continues. A new state taskforce of marine scientists and biologists is tackling the blue-green algae outbreaks that have choked Florida’s inland waterways. As for the Key deer, of which fewer than 1,000 remain, volunteers leave clean drinking water to replace salt-contaminated watering holes as herds retreat to higher ground. A longer-term debate is under way on the merits and ethics of relocating the species to other areas of Florida or the US .

The cost:  Florida is spending $4m in the current financial year for expanded water quality analytics related to “nutrient over-enrichment” and $3m annually for the next five years on Red Tide research. A 20-year project backed by the National Oceanic and Atmospheric Administration to restore 3m sq feet of the Great Florida Reef is estimated at $100m. Such projects can only scratch the surface of the incalculable investment that will be needed to save the states species and their habitats.

The threat:  Tourist brochures showcase miles of golden, sandy beaches in South Florida, but the reality is somewhat different. The Florida department of environmental protection deems the entire coastline from Miami to Cape Canaveral “critically eroded”, the result of sea level rise, historically high tides and especially storm surges from a succession of powerful hurricanes. In south-eastern Florida’s Palm Beach, Broward, Miami-Dade and Monroe counties, authorities are waging a continuous war on sand loss, eager to maintain their picture-perfect image and protect two of their biggest sources of income, tourism dollars and lucrative property taxes from waterfront homes and businesses. 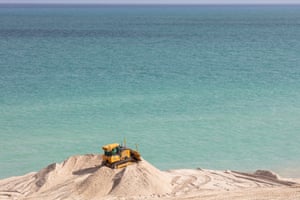 Federally funded imported sand is used as one of mitigation measures against the climate crisis. Photograph: Anastasia Samoylova

Possible solutions:  With the other option abandoning beaches to the elements, city and county commissions have little choice but costly replenishment projects with sand replacement and jetty construction. Federal law prohibits the importation of cheaper foreign sand, so the municipalities must source a more expensive alternative from US markets, often creating friction with residents who don’t want to part with their sand. Supplementary to sand replenishment, the Nature Conservancy is a partner in a number of nature-based coastal defense projects from West Palm Beach to Miami.

The cost:  Authorities usually match federal funding for replenishment projects. An $8m project restored almost 125,000 cubic yards to three Broward county beaches last winter, and $55m will be spent on a 400,000-sq yd restoration on three others beginning in the fall. The region’s showpiece, Miami Beach, benefited from 61,000 cubic yards of new sand this year at a cost of $16m. Statewide, Florida spends an average $50m annually on beach erosion.

FULL ARTICLE AND SOUE THE GUARDIAN