A Tale of an Unequal City: Delhi’s Waters Through the Eyes of Women Working as Domestic Workers 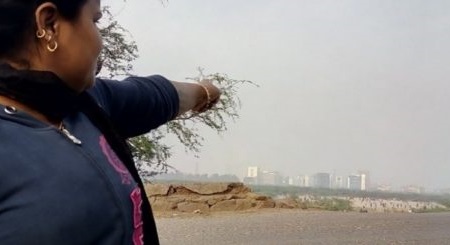 This blog post is a collaboration between Anjali – Rachana – Rajni – Sharda – Sonia – Tatiana.

In Delhi, as in various cities of India and the Global South, many middle and upper-class households depend on female domestic workers who frequently work for low wages and without social security benefits. Domestic workers are engaged in house chores, like cleaning, washing, and cooking. As such, these women are in constant contact with clean water and proper sanitation facilities in their workplaces. However, when they return home, in informal or unprivileged settlements, they often lack affordable and quality water services.

With this in our minds, we intended to analyse the routine strategies of domestic workers when they access sanitation and dispose of wastewater in Delhi. We chose the Photovoice methodology, a visual research technique that provides participants with cameras, so that they can document their experiences. A number of information meetings with women working as domestic workers were held during November 2016. Finally, four women – Rajni, Anjali, Sonia, and Sharda – living in the Madanpur Khadar settlement in the banks of River Yamuna, agreed to collaborate in the research. Through their pictures and stories we document everyday inequalities in access to water and sanitation (and the ways in which these inequalities are contested).

When we are home

Delhi’s local government claims to have extended water infrastructures to 217 unauthorised settlements in 2016 and has promised to extend the water network to every household in the city by December 2017. However, pictures taken (and stories told) by the research participants give testimony of a different reality. Residents of the Madanpur Khadar area are highly dependent on ground water sources for daily cleaning needs and women and girls are primarily responsible for collecting and storing safe drinking water from government installed water points (kiosks) or water tankers.  In what concerns sanitation and waste waters, Rajni, Anjali, Sonia, and Sharda, explained that there aren’t any sewer lines in the area and that most of the families use community toilet complexes (CTCs). There are 8 CTCs in the area (with a total of 94 seats for women, 24 seats for children, and 114 seats for men).  These toilet complexes are managed by a community member who sits at the entrance to charge each user, for the cleanliness and maintenance of the facilities. Participants complain about the daily family fee, as they are the ones covering the household fees. Sharda describes the burden she feels:

“Not only do I have to worry about buying drinking water, I also need to care for our morning necessities. I must come up with Rs. 2/ per family member so that they can all use the community toilet as soon as they wake up. There are 4 or 5 community toilets in the area .We try to use the nearest one first and look for another one only if there is a long queue. The truth is that we need to control (our bladder and bowel) as much as we can”.

Community toilets are often not so clean despite the service charges that community members pay per use. Rajni complains about the community toilets’ “broken doors, broken taps, water leakages, and specially the seats full of menstruation clothes”. 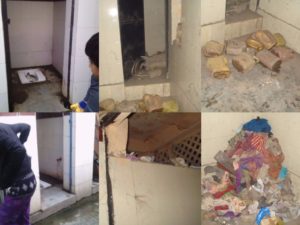 Participants also complain about water cuts in the community toilet during the summer months. These cuts force them to find extra water for the household (“we need to carry water bottles with us, not to drink but to flush the toilet. It is really a very stressing situation to manage: to find water for each member of the family”). Also, they criticize the arbitrary opening hours of the community toilets. Rajni explains that, since community toilets open at 5 a.m. and close around 22 p.m., they get used to manage their body accordingly: “we eat less at night but in case of emergency or illness we have no other option than to use our houses’ premises or nalis (temporary drainage systems)”.

Sharda, in turn, sustains that there are also safety concerns as gangs, involved in drugs, alcohol, and gambling activities, have emerged in the area.

Sharda: “We do not feel safe when we walk to use community toilets. Men stare at us and make lewd comments. You can always find drunk men all around the community toilets playing  jua  (gambling). I sometimes feel so scared for my daughters when I go for work leaving them alone at home”

Anjali: “Yes, my friend was harassed by men when she went to use the community toilet as she reacted to the lewd comments made by a guy that had been following her since long. Nobody came forward to help her”

Sharda: “Whenever my young daughter goes to the community toilets, she looks for a friend to accompany her as she feels insecure and I always have a fear for her in my mind while I’m at work”

Rajani: “The jungle (forested area near the settlement) is dangerous for women as they have been rape cases reported and not much has been done to improve the situation. We fear while walking around this area in the evening as many men can be seen drinking in the premises”.

Some households have chosen to build their toilets at home by installing septic tank pits. They then need to pay septic tankers to empty the pits twice or thrice in a year. Anjali describes her household’s situation: “We have a septic tank pit, tankers they charge Rs 500 for each cleaning of our pit”. 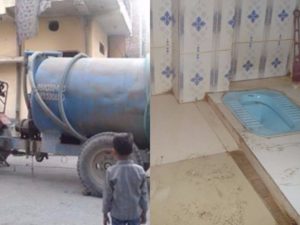 Participants also documented the disposal of untreated sewerage into the Yamuna, their closest river and the largest tributary of the Ganga. Sharda explains: “I have seen septic tankers empting human excreta in the Yamuna when I go to my workplace (…) I have also observed the vegetable sellers washing their vegetables with this water, at the same place, before bringing them for sale at our local market”. 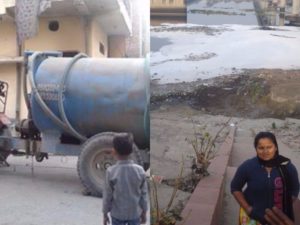 In what concerns drainage, participants explain how, the lack of proper infrastructures makes the streets very filthy as wastewater flows everywhere. Sonia, for example, describes her block as “very dirty and full of insects, mosquitoes”. She clarifies that although the community has installed temporary drainage channels they sometimes overflow. “I can show you faecal matters everywhere flowing through the temporary  nalis  (drainage channels) as people use the premises as latrines during night. The situation gets worst during  monsoon  (rainy season)” she explains. Although the South Delhi Municipal Corporation is formally responsible for solid waste collection in the settlements,  waste pickers  (informal waste collectors), can be seen in the area. Anjali narrates how, even if they respect the official bins, these seldom get emptied and this in turn creates opportunities for waste pickers:

“People throw garbage anywhere in the area. Even if we try and throw our garbage at designated points, it just remains there and nobody comes to clean the place or empty the bins for a month or so. Only waste pickers collect this stuff as they live here, they are our neighbours. It gets bad during the rainy season when streets get filthy and smelly. You can see mosquitoes, animals and flies all around in the area”. 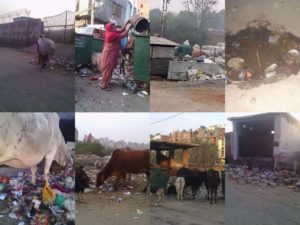 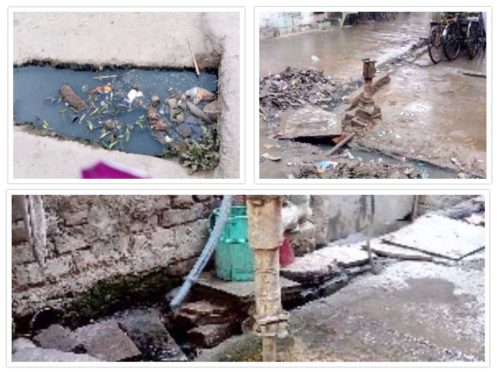 “There are overflowing nalis and dirty streets everywhere” (Pictures by Sonia)

When we are at work 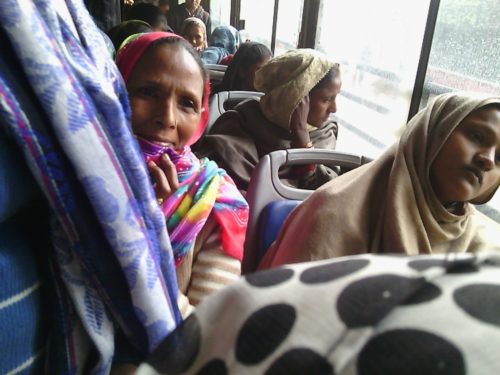 Participants travel about two hours daily to reach their work places and they do not receive any money for commuting from one place to another. Their montlhy salaries go from Rs 1,500 to 5,000 (USD 22 – 76), depending on the number of chores they perform. All participants, Rajni, Anjali, Sonia, and Sharda sustain that since they come from rural areas, and they were born in lower castes (in the Hindu traditional caste system) they usually find work as cleaners. Unlike cooks and baby-sitters, cleaners have no stability and earn less money. At the workplace they can take water from a servant’s hydrant but they are not allowed to open the refrigerator where the family’s water is stored.

“We handle all dusting, sweeping and mopping tasks. We water the plants, wash and iron the clothes, and clean the bathtubs and the toilet seats” they explain. They clarify that there are other domestic workers who perform other tasks such as baby-sitting, and cooking. Although they must clean the household’s toilets, including the seats, they are not allowed to use them. “They have fully equipped bathrooms but we will lose the job if they catch us using the same facilities” they explain. 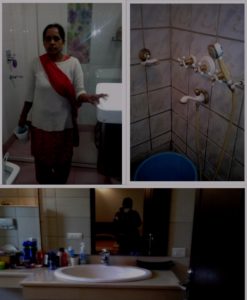 “ They have fully equipped bathrooms”  (Picture: collaboration among participants)

“It is a good thing that here is a separate bathroom which can be used by us. It is not as clean or fully equipped as theirs but it has piped water supply” the participants explain. They are allowed to use a separate toilet (Servant toilet) usually on a separate part of the house (besides the kitchen) or outside of the building. This toilet can be flushed and is communal (for all servants, men and women). 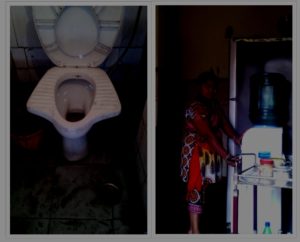 This collaboration between Rachana and Tatiana, two southern women working as scholars and four southern women working as domestic workers, left a trail of reflection and of deeply contradictory images. These images laid bare the routines of domestic workers in access to water and sanitation in two set ups: their households in Delhi’s informal settlements and their work places in buildings and gated communities of the formal city. Pictures taken by Rajni, Anjali, Sonia, and Sharda display the disparities in water distribution in the city. These disparities are not only about clean water distribution, but also about dirty waters – sewerage, rain water, and grey water – running through some streets and being drained out of others. Currently, participants use multiple strategies and routines in order to stay in the city. Domestic workers’ everyday lives include a commute that takes them from places of water scarcity and poor sanitation to places with water abundance (and then back). In their own households they experience long queues to access toilets and water from tankers, in their workplace they can access a servant’s toilet in which they can flush.

One of our conclusions is related to the geographies of inequality. We contend with anthropologist Arjun Appadurai, that inequality in many Southern cities is not only a matter of horizontal geography in which some communities have water infrastructure and some don’t, but rather it is a matter of helical geography. That is, it entails a circular movement, one that follows a helix or spiral staircase. A movement of “servants”, drivers, cleaners, and domestic workers of various kinds that don’t have access to infrastructure but spend their days dancing between the formal wealthy city and the infrastructure free city (where they try to live).

Featured image:  “Looking at their city from my city”  (Picture: collaboration between participants)