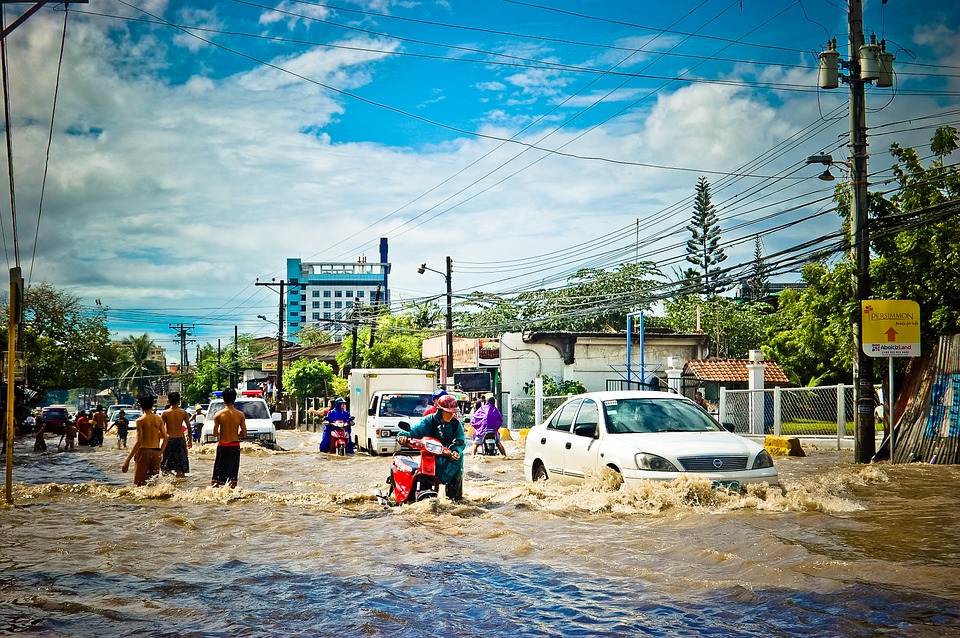 Today is the comment deadline for the ‘Public Assistance deductible,’ a concept that can help protect communities and ensure federal taxpayer dollars are spent wisely. The Union of Concerned Scientists is filing comments supportive of this idea, with some important recommendations for improvements.

What is the Public Assistance program?

Federal taxpayers pay for at least 75 percent of the eligible costs, and state and local entities pay the rest. According to FEMA, on average, the Public Assistance program has provided approximately $4.6 billion in grants each year over the past decade.

Ideally, program funds would be invested in ways that ensure communities build back in a stronger, more resilient way. But in practice this is not always the case.

After disasters, there is often a strong impetus to build back the same way, right where things were before—which may not be the best long-term choice. For example, in many places sea level rise is worsening risks of coastal flooding. Storm surges, riding on higher sea levels, will be able to reach further and higher inland causing greater damage. Post-disaster recovery efforts need to take into account scientific data and projections of sea level rise, and not perpetuate risky rebuilding in harm’s way.

Under FEMA’s proposed design for this deductible, states would first have to meet a minimum threshold of expenditures on post-disaster recovery before FEMA would provide federal assistance through the PA program. The state-specific deductibles would be calculated using a formula that starts with a common annual national base deductible equivalent to the median average amount of Public Assistance received across all 50 states in the past 17 years. This would then be adjusted by taking into account a state’s fiscal capacity and its disaster risk relative to other states.

The truly innovative part of the proposal would be that FEMA would allow states to buy down their deductible through credits earned for state-wide measures that would help build resilience and lower the costs of future disasters.

FEMA’s framework would include $3 in deductible credit for every $1 in state spending on qualifying mitigation activities. These could include protective building codes, measures to safeguard or enhance wetlands and other nature-based flood protections, flood risk management standards (that require building at least 2-3 feet above base flood elevation), and state investments in mapping, tools, and enhanced hazard mitigation plans to help identify and reduce disaster risks.

For further details on FEMA’s PA deductible framework, including the calculation of the state-specific deductibles and credits, see the Supplemental Advanced Notice of Proposed Rulemaking (SANPRM).

UCS supports the concept of a well-designed deductible for the PA program. We believe this could be an effective way of addressing a number of priorities for reform of federal disaster funding previously identified by the Government Accountability Office, Congress, and by the Department of Homeland Security’s Office of the Inspector General.

FEMA has been urged to find ways to reduce the costs of federal disasters. Rather than use blunt, inequitable methods that just transfer costs from the federal government to state, local, and tribal governments, we are encouraged that FEMA is exploring ways to help lower the costs of disasters through hazard mitigation measures. The PA deductible program would give states an incentive (through the crediting mechanism) to take pre-disaster protective actions to make communities more resilient to disasters.

With careful attention to the details of such a proposal, this type of concept could help advance community resilience and ensure that taxpayer dollars are wisely invested.

Goals of a Public Assistance Deductible

Studies show that investments in pre-disaster risk reduction measures have a payback of at least 4 to 1 and estimates of the benefits of investments in flood mitigation are higher at 5 to 1. Studies from the Wharton School at the University of Pennsylvania and Swiss Re indicate that higher design standards have a far higher payback than 4 to 1. Yet our nation continues to under-invest in sensible pre-disaster hazard mitigation measures, even as more lives are lost and the costs of weather and climate disasters grow.

In our comments, we have urged FEMA to ensure that the PA deductible program:

A science-based, equitable approach to building resilience to disasters will go a long way toward protecting people, property and the functions of our natural ecosystems, while ensuring the best use of taxpayer dollars. UCS has developed a set of principles that can help inform this type of approach, Toward Climate Resilience: A Framework and Principles for Science-Based Adaptation.

A step toward building climate resilience

The PA deductible concept is an important step toward making our nation more resilient to disasters. We’ll be looking for expeditious action from FEMA to take our and other public comments into account and move this forward toward a rulemaking process.

Congress and the Trump administration also need to act on multiple fronts to help communities facing the impacts of climate change and other disasters. One thing they definitely  shouldn’t   do is make harmful cuts to FEMA’s budget. 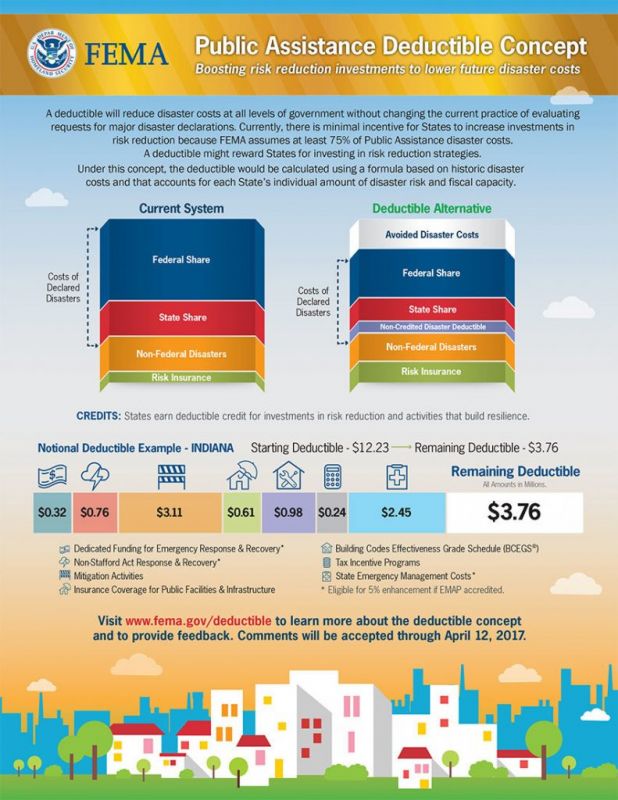 Image: The Public Assistance Deductible infographic provides a snapshot overview of the basic concept and an example of how one State, in this case Indiana, could earn credits toward offsetting the deductible amount.
Image source: FEMA