Impacts of Marine Plastic Pollution From Continental Coast to Subtropical Gyres (...) in the SE Pacific 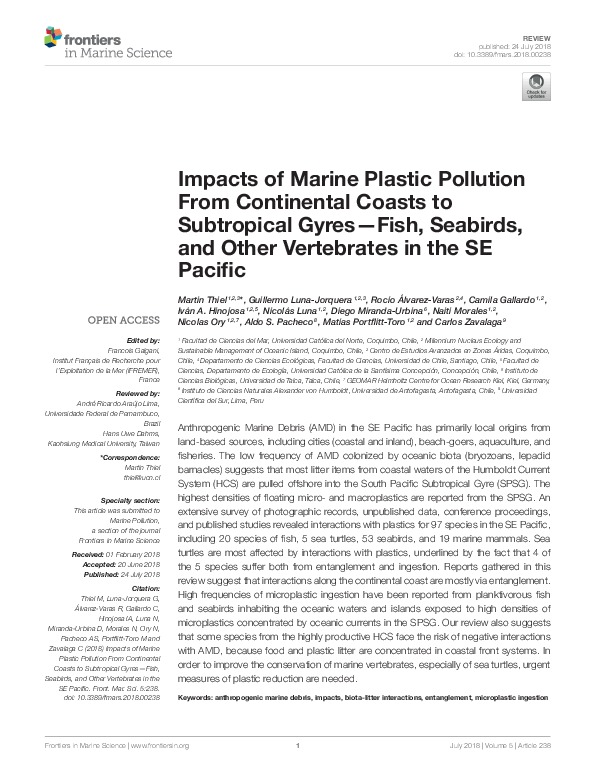 Our chilean collaborators, Guillermo Luna-Jorquera and Martin Thiel for the scientific mission currently proceeding on board our Race for Water Ambassador Vessel from Conception to Easter Island are pleased to share their recent paper about the impacts of marine debris on fish, seabirds and other vertebrates in the South East Pacific. According to their study, most litter items from coastal waters concentrate in the South Pacific Subtropical Gyre with a high concentration of microplastics measured around Easter Island, our next Race for Water Odyssey stopover.

Impacts of Marine Plastic Pollution From Continental Coasts to Subtropical Gyres - Fish, Seabirds and Other Vertebrates in the SE Pacific

Anthropogenic Marine Debris (AMD) in the SE Pacific has primarily local origins from land-based sources, including cities (coastal and inland), beach-goers, aquaculture, and fisheries. The low frequency of AMD colonized by oceanic biota (bryozoans, lepadid barnacles) suggests that most litter items from coastal waters of the Humboldt Current System (HCS) are pulled offshore into the South Pacific Subtropical Gyre (SPSG). The highest densities of floating micro- and macroplastics are reported from the SPSG. An extensive survey of photographic records, unpublished data, conference proceedings, and published studies revealed interactions with plastics for 97 species in the SE Pacific, including 20 species of fish, 5 sea turtles, 53 seabirds, and 19 marine mammals. Sea turtles are most affected by interactions with plastics, underlined by the fact that 4 of the 5 species suffer both from entanglement and ingestion. Reports gathered in this review suggest that interactions along the continental coast are mostly via entanglement. High frequencies of microplastic ingestion have been reported from planktivorous fish and seabirds inhabiting the oceanic waters and islands exposed to high densities of microplastics concentrated by oceanic currents in the SPSG. Our review also suggests that some species from the highly productive HCS face the risk of negative interactions with AMD, because food and plastic litter are concentrated in coastal front systems. In order to improve the conservation of marine vertebrates, especially of sea turtles, urgent measures of plastic reduction are needed.

Please find their paper in attachment.