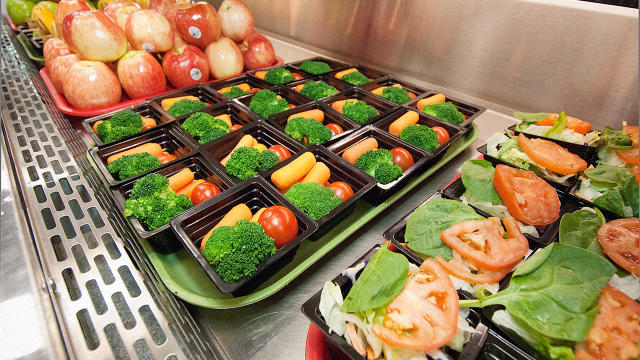 In previous 2 years, Oakland Unified School District reduced the amount of meat in school lunches by 1/3 and replaced it with more vegetables and fruit. The water consumption and carbon production in the district was reduced, and the school saved money.

The food we eat takes vast amounts of water for its production and makes even 2/3 of our water footprint.

Moreover, the carbon footprint of the food is raised by growing the food, processing, transporting, storing, cooking and disposing. All of this produces greenhouse gas emissions.

Huge amounts of grain needed for cattle feeding greatly increase the carbon footprint. Therefore, reducing the amount of meat we eat can help reduce the effects of climate change.

The school district participated in a study which was meant to establish if reducing the amount of meat and cheese in school lunches would help mitigate the effects of climate change.

Environmental advocacy group Friends of the Earth (FoE) collaborated with the schools in this study.

In the 2 years, during which the study was conducted, the carbon footprint was drastically reduced, and savings in cash and water were clearly noticeable.

The meat served was reduced by just 30% so that the kids still had enough of it to eat. Instead the school invested the money it would usually spend on buying more fruit and vegetables, delivering a healthier diet for kids.

The carbon footprint was reduced by impressive 14%. Taking into account that the district produces 660 t of carbon per year, that is the equivalent of driving 1.5 million miles per year.

Water consumption was reduced by 6%, which is the equivalent of 42 million gallons or 7 gallons per meal.

$42,000 of money was saved by the district, after the including the costs of buying more fruit and vegetables.

In conclusion, reducing the meat we eat just by a certain percentage could have huge effects on the environment.