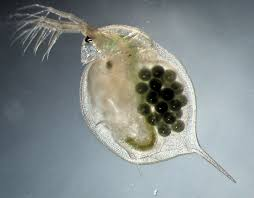 Plastics are widely used in todays society leading to an accelerating amount of plastic waste entering natural ecosystems. Over time these waste products degrade to micro- and, eventually, nanoplastic particles. Therefore, the break-down of plastics may become a critical threat to aquatic ecosystems and several short term studies have demonstrated acute toxicity of nanoplastics on aquatic organisms. However, our knowledge about effects of chronic or life-time exposure on freshwater invertebrates remains elusive. Here, we demonstrate results from life-time exposure (103 days) of a common freshwater invertebrate, Daphnia magna, exposed to sub-lethal concentrations of polystyrene nanoparticles. 53 nm positively charged aminated polystyrene particles were lethal at concentration of 0.32 mg/L which is two magnitudes lower than previously used concentrations in short-term (24 h) tests. At this concentration the life-time of individuals was shortened almost three times. Negatively charged carboxylated 26 and 62 nm polystyrene particles, previously demonstrated to be non-toxic at 25 and 50 mg/L concentrations in short-term tests, were toxic to D. magna at all concentrations used in our long-term study. Although total reproductive output was not significantly affected at increasing concentrations of polystyrene nanoparticles, there was a decreasing trend in the number of offspring over their life-time. Hence, in order to understand how the potential future environmental problem of nanoplastic particles may affect biota, long-term or life-time studies resembling environmental concentrations should be performed in order to provide information for predictions of future scenarios in natural aquatic environments.