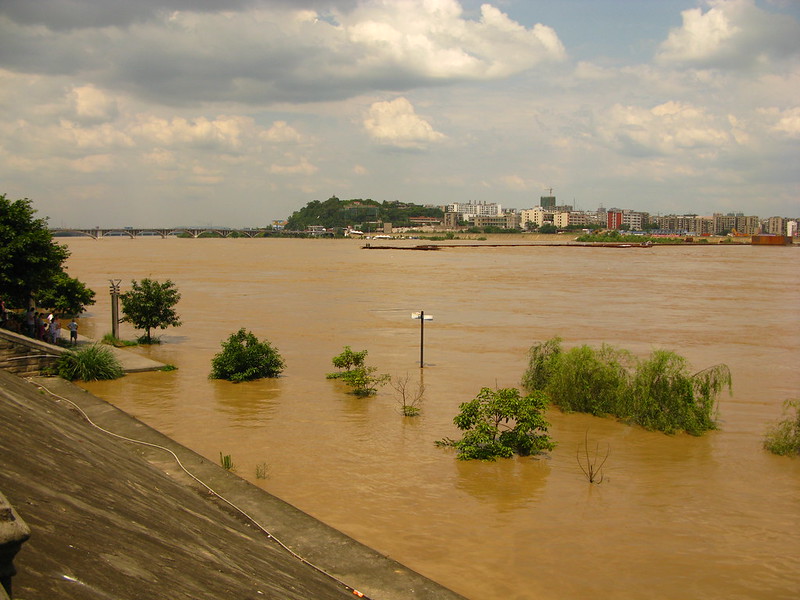 South China is battling a serious flood problem, and while this can never be completely prevented, with smart policy, the effects of floods can be blunted, Asit K Biswas and Cecilia Tortajada write.

China has suffered regularly from floods throughout its history. In ancient China, around, a place where legend and history often intermingle, Emperor Yu The Great, founder of the Xia Dynasty, is said to have tamed the floods of the mighty Yellow River, saving citizens untold misery.

The Yellow River is the second largest river in China, after the Yangtze, and the sixth largest in the world. Floods are so regular and serious there that it is sometimes called ‘China’s sorrow’.

In fact, the world’s most severe flood occurred in the Yangtze and Huai rivers in 1931. After two years of serious drought, extreme rainfall in the densely populated Yangtze basin contributed to this flood, and it affected an area the size of all of England and half of Scotland.

This flood and the diseases and malnutrition that resulted from it were responsible for over two million deaths, and an estimated 40 per cent of the affected population had to leave their homes.

Floods are one of nature’s most powerful destructive forces. Between 1995 and 2015, there were some 3000 flood disasters all around the world, affecting nearly 2.3 billion people, and since 1980, floods have contributed to well over a trillion dollars in global economic losses.

South China is now battling another serious flood. Water levels in 433 rivers have become dangerous since early June, with 33 rivers reaching historically high levels. As of 13 July, nearly 38 million people were affected in 27 provincial level regions, with 141 people dead or missing, and this count sure to climb.

China’s Ministry of Emergency Management said on 9 July that an estimated 1.72 million people had been relocated, 22,000 houses had collapsed, direct economic losses were estimated at $8.81 billion.

Four cities, Xianning and Jingzhou of Hubei province, and Nanchang and Shangrao of Jiangxi province, have declared their highest levels of emergency alert for the floods. In Jiangxi province alone, 5.5 million people were affected, and nearly 500,000 had to be evacuated as of 13 July.

Past experiences indicate major floods are most severe in late July and early August. In general in China, the flood season lasts until mid-August, so the most dangerous period of this emergency may still be yet to come.

The latest flood is almost reaching the scale of the 1998-major flood in the middle and downstream reaches of Yangtze river. In Poyang Lake, country’s largest freshwater lake, water level rose to 22.6 metres on 13 July, higher than what was recorded during the 1998 flood.

Premier Li Keqiang, during a meeting of the State Council on 9 July, called for all possible efforts in rescue and relief work since people’s lives are top priority. He noted there should be zero complacency in flood control and disaster relief works. While floods cannot be completely controlled, but their impacts can be significantly mitigated.

In terms of mitigation, infrastructures and soft solutions are both essential. For example, Three Gorges Dam has played important an important role in mitigating floods in the Yangtze River. Between 2003, when the dam was completed, and 2019, It has been used 53 times to control floods.

China has put significant work into assessing risks by identifying developments that are in flood-prone areas, their vulnerabilities, and possible ways to reduce flood risk. Improvements have been made in flood monitoring, forecasting, warning, and communication systems.

The country has also built extensive flood control infrastructure along rivers and drain flood waters from cities as soon as possible. Grey infrastructure such as dams, walls, drainage systems, flood retention tanks, canals, and flood-proof buildings have become indispensable for cities. In recent years, they have been complemented with green solutions such as the sponge city program, artificial wetlands, rain gardens, and permeable pavements.

Additionally, with floods increasing in frequency and intensity, city governments are requesting that large construction projects – buildings and factories – should build storage areas for rainwater that can temporarily hold water during floods. Multiplied by the thousands, these pools can hold sizeable amounts of rainwater that otherwise would flood into streets or overflow drains.

A major problem China and the rest of the world faces is how to determine the magnitude and duration of extreme floods that are likely to happen in the future because of climate change. The truth is that policymakers simply do not have enough knowledge at present on how to estimate reasonably accurately magnitudes of such extreme floods but looking to China may be a start.

One thing is clear though, cities must now plan for major floods to occur once in every 50 years. With the influence of climate change, cities should now plan to handle ‘one in 100-year’ floods much more often, potentially even every few decades, and look to those countries that have long struggled with floods for policy guidance.