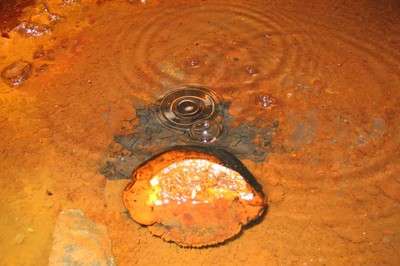 A team of researchers working deep in a mine in Canada has found water samples that date back approximately 2 billion years, breaking the record of oldest discovered water on the surface of the Earth by approximately 500 million years. The group presented their findings at the American Geophysical Union Fall Meeting last week in San Francisco.  Scientists have known for some time that water exists far below the ground—water that has been isolated from what is normally known as the water table—unseen and untouched for billions of years. To learn more about such water, scientists have been working with mining companies. As miners go deeper, the researchers gain access to ever deeper sources of water. Prior to the discovery of this most recent record breaker, the same team working in the same mine back in 2013—the Kidd Mine in Ontario—found a water sample at approximately 2.4 km that was subsequently dated to approximately 1.5 billion years ago. The new record holder was found at approximately 3 km down—the researchers determined the age of the water samples by studying dissolved gasses. The researchers also reported that the samples they obtained came from what they describe as a large source that was flowing out of the ground at a rate of several liters per minute—a volume, they note, that is much larger than has been predicted. They also discovered that sulfate in the water had come from interactions between the water and the rocks around it, rather than from another source. This, they note, suggests that the water was capable of sustaining life. To date, no subsurface cutoff water source has ever been found that holds life, but this finding by the team suggests that it is possible. If such microbial life does exist somewhere deep below the surface, it would represent a form of life that has evolved separately from all other life on Earth. It would also suggest that space scientists might have to consider the possibility of similar forms of life living far beneath the surface of Mars or other planets. Source: Phys.org