Party has led people to prosperity 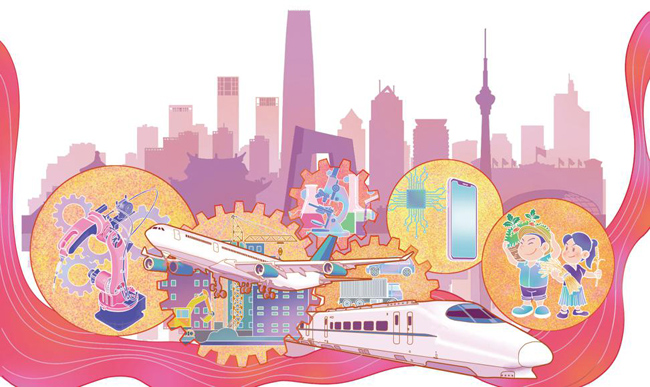 The 1920s were not a good time for China. Its 400 million people mainly lived in rural areas, mired in poverty. Feuds among warlords led to frequent internecine wars. And the government of the day couldn’t do much to improve the lives of the Chinese people. The Chinese people faced poverty and famine.

During this tumultuous period, 13 young men and two Comintern representatives met secretly in a Shikumen building in Shanghai’s French concession between July 23 and early August, 1921. Afraid of being discovered by the police, they fled to nearby Jiaxing in Zhejiang province to complete their discussion, which ultimately led to the formation of the Communist Party of China.

From its modest beginning, the CPC has gone from strength to strength in its 100-year history. The reform and opening-up initiated by former leader Deng Xiaoping in the late 1970s totally changed the economic and social development trajectories of China. For example, China’s average annual growth from 1978 to 2008 was more than 10 percent, unprecedented in history.

To get a better idea of China’s development, let’s compare the development paths of China and India, the world’s two most populous countries. In 1980, China’s per capita GDP ($194) was about one-third less than India’s ($266). In 2020, China’s per capita GDP was $10,500－5.5 times that of India ($1,900). Thanks to such phenomenal growth, China is now the world’s second-largest economy. And it is expected to overtake the United States in nominal terms by 2032 to become the largest economy.

Consider a few more facts. When the Fortune Global 500 list was first compiled in 1990, it did not have a single Chinese company. In 2020, China led the list with 124 companies, followed by the US with 121 and Japan with 53. This trend is likely to continue.

Similarly, in 1980, not a single Chinese bank figured among the world’s 20 largest banks. In 2020, China had four banks in the top-five list, with the fifth being from Japan.

As for infrastructure, China now leads the world with modern highways, airports, bridges, high-speed trains and large dams. Between 2015 and 2020, China expanded its high-speed train network by an incredible 91 percent.

China’s performance has been commendable in the social sphere, too. The world met the Millennium Development Goal of reducing poverty only because of the progress made by China and India.

By the end of 2020, China had eradicated absolute poverty and realized the first centenary goal of building a moderately prosperous society in all respects.

As the CPC Central Committee General Secretary Xi Jinping said in his landmark speech to mark the 100th anniversary of the founding of the CPC:”This means that we have brought about a historic resolution to the problem of absolute poverty in China, and we are now marching in confident strides toward the second centenary goal of building China into a great modern socialist country in all respects. This is a great and glorious accomplishment for the Chinese nation, for the Chinese people, and for the Communist Party of China.”

In science and technology, China’s research and development expenditure exceeded that of the US for the first time in 2020. Over the past two decades, China’s R&D expenditure, as a percentage of GDP, has more than tripled. After successfully landing the Zhurong rover robot on Mars in May, China is now building a modular space station, which is expected to be operational next year.

As far as public health and medical care are concerned, on June 30, the World Health Organization certified China to be malaria-free. In the 1940s, some 30 million malaria cases and about 3,000 deaths were reported from China every year. And in the 1950s, about 12 million people in China suffered from schistosomiasis, a debilitating disease, which was eliminated by the mid-1990s.

Besides, the Chinese government interacts with the people more actively than what is widely believed in the West. But these interactions and the public’s views on different issues are handled very differently from those in the West. In Shenzhen, for instance, one in three people volunteers to carry out social services. And local governments have set up digital comment boxes where people can report all types of problems.

On the environmental front, among other things, China has instituted a “river chief system” where senior officials, given charge of a certain stretch of a water body, have to ensure no toxic elements or untreated industrial wastewater flows into the river or lake under their jurisdiction and the water quality remains above the safety level.

The names of the river chiefs and their telephone numbers are provided on prominent billboards so that local residents can call them directly to report any pollution.

After the pilot river-chief system proved effective in cleaning the highly polluted Lake Taihu, the central government extended the program across the country. Now China has more than 1.2 million river chiefs and workers to protect the rivers and other water bodies.

Eight surveys conducted by the Ash Center for Democratic Governance and Innovation of Harvard University from 2003 to 2016 found high levels of public satisfaction with the Chinese government. And the Asian Barometer Survey of 14 Asian countries has consistently found that people in China, Singapore and Vietnam have the highest levels of trust in their government institutions.

This should not be surprising, because China’s leaders have always been pragmatic. And many CPC senior officials are better educated than the parliament members of many other countries.

How will the CPC fare during its second century? The Chinese economy rebounded after China largely contained the COVID-19 pandemic last year. China not only has modern cities with excellent infrastructure and connectivity, and a very entrepreneurial middle-income group, it is also becoming increasingly international with a global outlook, not least because before the pandemic, some 1.6 million Chinese students were studying abroad and about 1.5 million Chinese employees were working for Chinese corporations overseas.

Also, the Belt and Road Initiative is likely to accelerate China’s globalization efforts even further.

By 2049, when the 100th anniversary of the founding of the People’s Republic will be celebrated, China would likely have become a strong, democratic, civilized, harmonious, beautiful, modern socialist country－and a leading actor on global central stage.